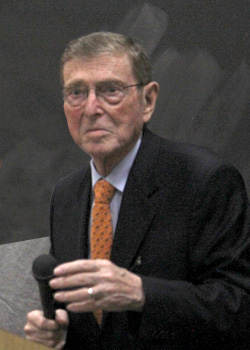 On Wednesday, November 6, former United States Senator Pete Domenici GP '15 visited Regis and spoke to students about many of the current issues facing our government today.

Domenici represented New Mexico in the U.S. Senate serving six terms as a senator, beginning in 1973 and culminating in 2009. His 36-year stint in the Senate remains the longest tenure in New Mexico’s history. He is also the proud grandfather of Regis junior Brendan Powell '15.

Domenici currently serves as a Senior Fellow at the Bipartisan Policy Center, where he co-chairs its Debt Reduction Task Force, Health Care Cost Containment Initiative, and Task Force on Defense Budget and Strategy. During his conversation with students, Domenici addressed a variety of topics including the national debt, healthcare, and energy consumption.

The event was organized for students by members of the Regis Young Democrats and Republicans club. Three years ago, the two independent student clubs merged in an effort to facilitate friendly and spirited debates on current economic issues, social issues, and foreign affairs. Seniors Tim Hannan '14 and Alex Petrillo '14 serve as co-presidents of the club.

"I really enjoyed seeing and listening to someone who has actually lived these debates on the senate floor," said Hannan. "It was interesting to hear his perspective on issues firsthand."

For Petrillo, the chance to meet the former senator was inspiring. "To hear a government official so willing to reach out and so excited to speak to young Americans and future leaders is motivational to those of us fascinated by the very issues he has dealt with throughout his career." 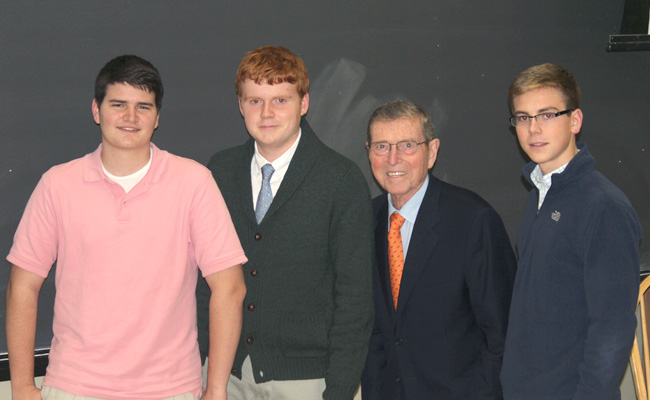 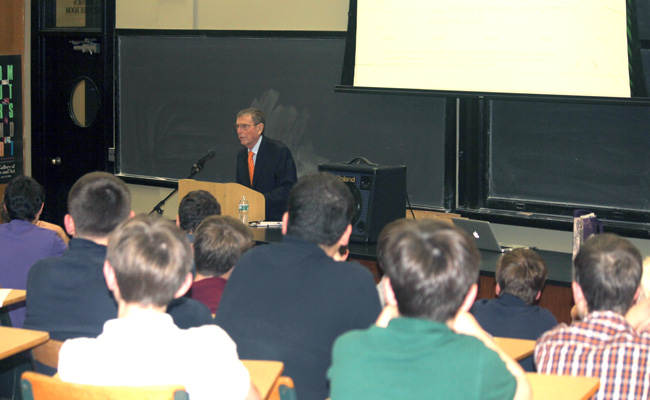 Above: Senator Pete Domenici GP '15 shares his thoughts with Regians in the Physics lecture room.