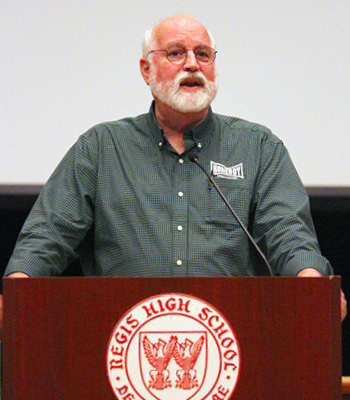 A year’s journey was brought to a close on May 16, as Regis set aside academics to celebrate John Francis Regis Day with the help of Fr. Greg Boyle, SJ, founder of Homeboy Industries.

Traditionally a day of reflection on issues of social justice—issues close to the heart of the saint to which Regis owes its name—John Francis Regis Day received a major expansion this year. Since September, the school has hosted several speakers and activities focusing on the theme of “Unpacking Poverty in America.” Fr. Mark Lane, CO, Director of Campus Ministry expressed his hope “that by tackling the complex realities of poverty in America, we deepen our knowledge and understanding of this pervasive social issue.” Even more importantly, the intention was to “ultimately inspire us to that action that effects real change.”

The first major event came with the December visit of Carol Brosnahan, CEO of Coalition for the Homeless. Her presentation opened students’ eyes to the lives of the 70,000 New Yorkers without a home as well as the many families forced to spend 65% of their income on rent. In February, the school welcomed Sister Simone Campbell, Executive Director of NETWORK. Famous for traveling the country with the “Nuns on the Bus,” Sister Campbell recounted the stories of those she had met, such as a woman who had pawned off her most valuable possessions in order to pay her son’s dental bill. She left Regians with a challenge: “We need your imagination...so that everyone in our nation can live with dignity.”

The series culminated with the full-day May celebration, featuring a keynote speech by Fr. Greg Boyle, SJ followed by a series of reflective experiences and alumni panels.

In his speech, Fr. Boyle crystallized the struggles and hopes of the year’s theme. In 1988, Fr. Boyle founded what would become Homeboy Industries, now the world’s largest gang intervention, rehabilitation, and re-entry program. The inspiration was born out of his experience as pastor of Dolores Mission Church—then the poorest parish in Los Angeles. For his work in founding Homeboy Industries and directing it toward great success, Fr. Boyle has received the California Peace Prize and the University of Notre Dame’s Laetare Medal.

The idea was simple: to provide a place for gang members to find employment and support. In short, to treat them as human beings. Jose, one of Homeboy’s Trainee Managers, recalled his surprise at getting hired despite being on parole and a former gang member: “they showed [me] compassion and love—which was foreign to me.”

It was this same theme—of responding to the “complex reality of poverty in America” with simple but radical kindness—that Fr. Boyle focused on during his speech. With humility and heart, Boyle held the attention of the whole-school assembly. “No policy,” he assured students, “is going to alter the state of homelessness...unless we believe that the people who live on the streets belong to us.”

Boyle focused on the stories of the gang members whom he considers himself “privileged to have worked with.” Both humorous and heartbreaking, their experiences have taught Fr. Boyle not to view service as a matter of “reaching people, but of asking: can you be reached?” In his invitation to students to “go to the margins not to make a difference” but to be made different by the people there, he tied together a theme students heard throughout the year.