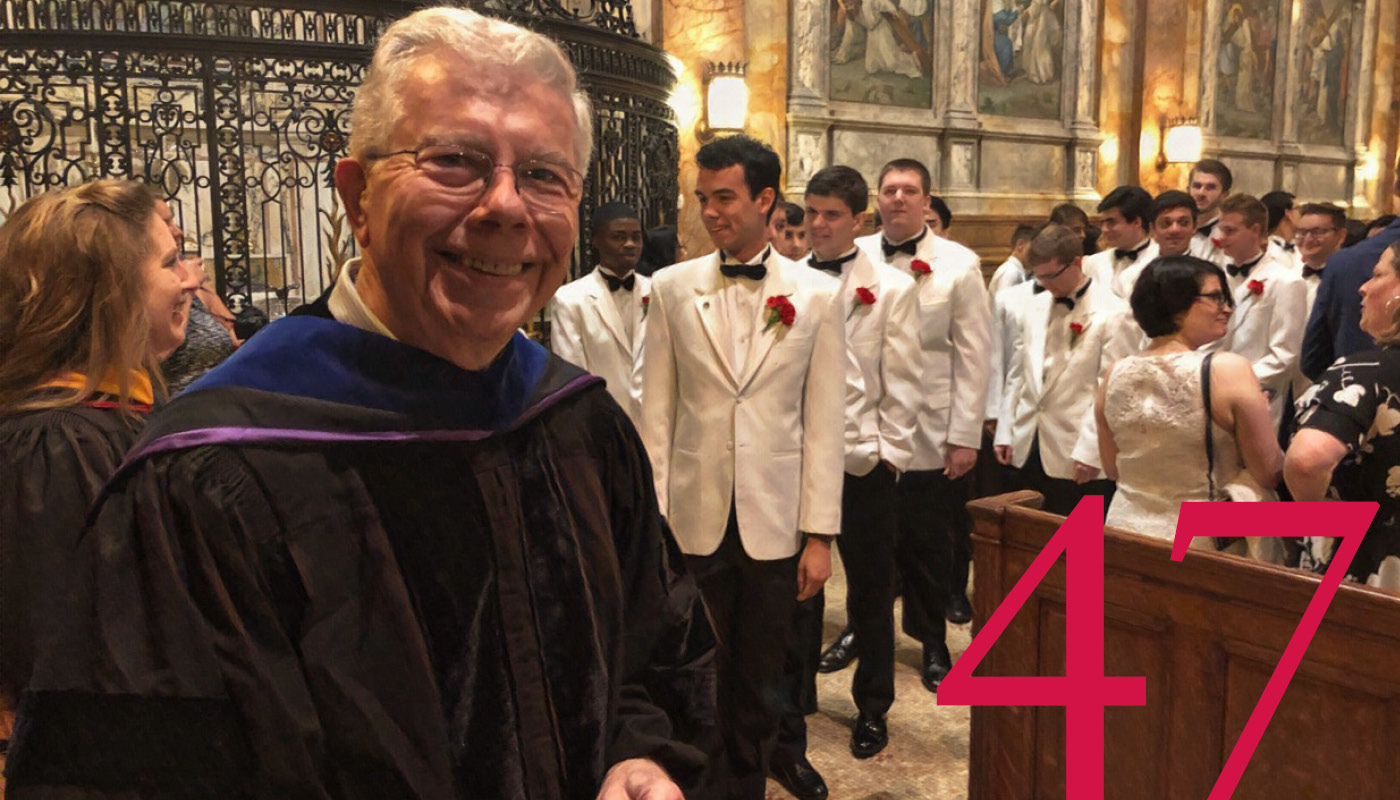 Dr. Tricamo holds his BA and MA in English Literature from Fordham University and his PhD in English and American Letters from NYU. He has been a long-serving freshman academic advisor and a valuable member of the Academic Committee. For almost four decades, he has taught Speech to all freshmen, in addition to sections of sophomore English and a variety of senior electives. His leadership has been critical to the outstanding reputation of the Regis English Department.

“He has taught every student in the building since he began teaching freshman speech. He is a favorite because of his keen mind, his gentle manner, and his total dedication to our students. I am grateful for having had the opportunity to work with him even briefly.”

At a school-wide assembly prior to the end of the academic year, Dr. Tricamo was awarded the 2018 Patricia Hannon Ignatian Educator award, a recognition given to a faculty member whose dedication to his or her students fosters a learning environment that is the model of Ignatian pedagogy.

Along with all Regians, Regis High School salutes the gifts and talents Dr. Tricamo has shared with multiple generations of students, and we thank him for his long-standing dedication to Regis.

“The world is full of better men because of the example John has set.”

At the end of the academic year, it was an honor and privilege to share with my colleagues a few words about Dr. John Tricamo. Over the past 20 years, John has been my teacher, colleague, department chair, and friend.

If this had been last year, when I was still a member of the august English Department, I might have presented a well-crafted oration, full of compelling metaphors and strong diction, or at least a playful limerick or two. But now that I work in Development, I was more compelled to fire up a spreadsheet and crunch some figures about Dr. Tricamo’s tenure here. So please indulge me, while I share Dr. Tricamo’s time at Regis “by the numbers.” (Nota bene: figures are “unaudited.”)

He has witnessed approximately 6,110 Regians graduate, nearly half of all graduates in the history of the school.

With roughly 90 students per year, he has entered 10,000 discrete trimester grades. I won’t venture to calculate how many were high honors and how many were the dreaded “unsat.”

On a similar note, I tried to calculate the number of student essays that Dr. Tricamo has read, graded, and commented upon, but Excel crashed.

In his 9 years as Assistant Headmaster for Administration, I know that Dr. Tricamo doled out some JUG. Assuming 10 JUGs per week, at roughly 40 school weeks per year, for 9 years, I arrive at the figure of 3,600 doses of discipline. This equates to something on the order of 200,000 minutes of JUG.

I could go on, but in short, John’s contributions to the Regis community are immeasurable. John has dedicated countless hours of service to this institution, from consultation with students and faculty—whether academic or personal—to serving on committees, participating and supervising school activities, teaching students, mentoring new faculty, and yes, grading essays.

I was a bit embarrassed to be left somewhat dumbfounded when honoring my own speech teacher, but fortunately many other Regains had words to share. Regis presented John with a binder full of letters from former students. There were many personal notes, anecdotes—both humorous and serious—as well as reflections and good wishes from those among the thousands of lives he has impacted.

In reading through these letters myself, I was impressed, humbled, and a bit overwhelmed by the scope of Dr. Tricamo’s impact at Regis. His legacy is truly legendary. A few key themes stuck out in these letters.

First and foremost, John is a scholar and a teacher who holds students to high standards. There are many funny stories in these letters about students falling short of John’s high expectations, but they all conclude with gratitude for being challenged and pushed. Regis is a place defined by academic rigor, and as a teacher and administrator, John has always kept that value clear and consistent in his work and in his expectations of others.

One of John’s many personal gifts is his patience. Many alumni wrote about John’s patience with them during their time as students. Whether it was from a disciplinary perspective in terms of antics or from the standpoint of academic performance, John has demonstrated patience in all of his interactions. On a personal note, as a member of his department, John was always patient with me whether it be having too many new ideas as an upstart young teacher or taking too long to return papers to my students. Cura personalis, care for the whole person, is a core Jesuit value, and John has been an embodiment of that value for all of us here.

Finally, so many writers noted—as many of us who have encountered him have too—John’s Christian character. John is a man of integrity. John is humble. John puts others first. These values pervade everything that he does. In working at a school for young men, he has modeled this value constantly. The world is full of better men because of the example John has set.

John, thank you for your many years of noble, loving, selfless service to Regis. We are forever grateful for your generous commitment to this school and its mission. We wish you all the best in retirement, and we sincerely hope you will stay in touch.