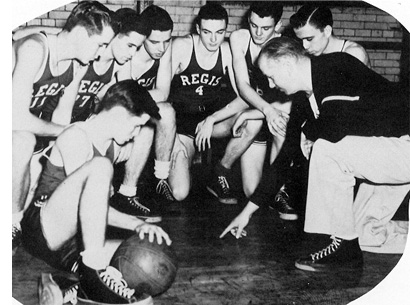 Don Kennedy, who coached Regis basketball from 1933 through 1950, will be inducted into the New York City Basketball Hall of Fame on September 19th at the New York Athletic Club. Kennedy will be one of 8 inductees, including the 1972-73 New York Knicks championship team.

Distinguished by his lean build and pencil mustache, Don Kennedy was an involved member of the Regis faculty between 1929 to 1950. Born in Brooklyn on April 7, 1907, Kennedy earned a degree from the Savage School for physical education. Beginning his career at Regis as a calisthenics instructor, Kennedy quickly demonstrated his aptitude for leadership with a strong emphasis on teamwork.

As a small school on the Upper East Side, Regis was overlooked by most as a worthy athletic opponent until Coach Kennedy took the reins. After leaving his coaching position at Power Memorial in 1945 so that he could dedicate all of his focus on the Regis basketball program, the team quickly joined the ranks of the best in the nation. Under his guidance, Regis dominated numerous Jesuit Tournaments, and won the Eastern States Championship in Newport, Rhode Island in 1947 and 1948, as well as securing runner-up titles in 1944, 1946, and 1949. The 1948 team, ranked #1 in the country at that time, won the national schoolboy championship and is often regarded as the best high school team of its era. The team produced 37 straight wins between their 1947 and 1948 seasons, a rare feat.

In 1950, Kennedy left Regis to become head coach at Saint Peter's College. During his tenure there, Kennedy became—and remains—the Peacocks' all-time winningest head coach after posting a 323-195 record from 1950 to 1972. His career highlights at Saint Peter's includes five appearances in the National Invitational Tournament (NIT). He coached eight 1,000-point scorers and 20 future Saint Peter's Athletic Hall of Fame players in his 22-year tenure.

Kennedy is also known for running Camp St. Regis, a summer camp he directed in East Hampton on Long Island, from 1944 to 1982.

Kennedy passed away at the age of 97 on October 26, 2004. In an undated interview prior to his death, Kennedy stated, "I never had as much pleasure in coaching anywhere as I did at Regis, because they were bright boys, and they were bright basketball players. You told them things once and they got it. And if they didn’t, they had sense enough to take whatever I'd hand out if they didn’t do the right thing. And they were marvelously disciplined—and I know that no coach ever had a better teaching and coaching situation than I had at Regis."

"Coaching at Regis," Kennedy added, "was honestly the greatest experience of my life."

Read more: A more detailed overview of Kennedy's career at Regis, including additional photos and quotes, has been posted on the Regis Centennial website.

A look back at Kennedy's career following his death was published in the November 4, 2004 New York Times, titled Don Kennedy, Who Turned St. Peter's Team Into Contender, Dies at 97.

Above: Photos of Coach Kennedy published in Regis yearbooks from the 1940's 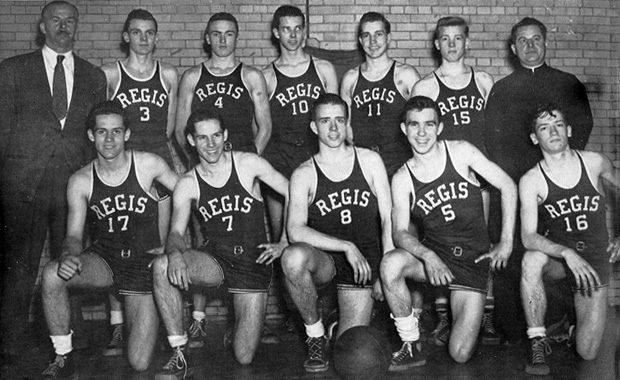 Above: Coach Kennedy with the famed 1948 Regis basketball team

Text and photographs for this news story were generously researched and compiled by Matt D'Ariano '12 and Jim Rowen '12.