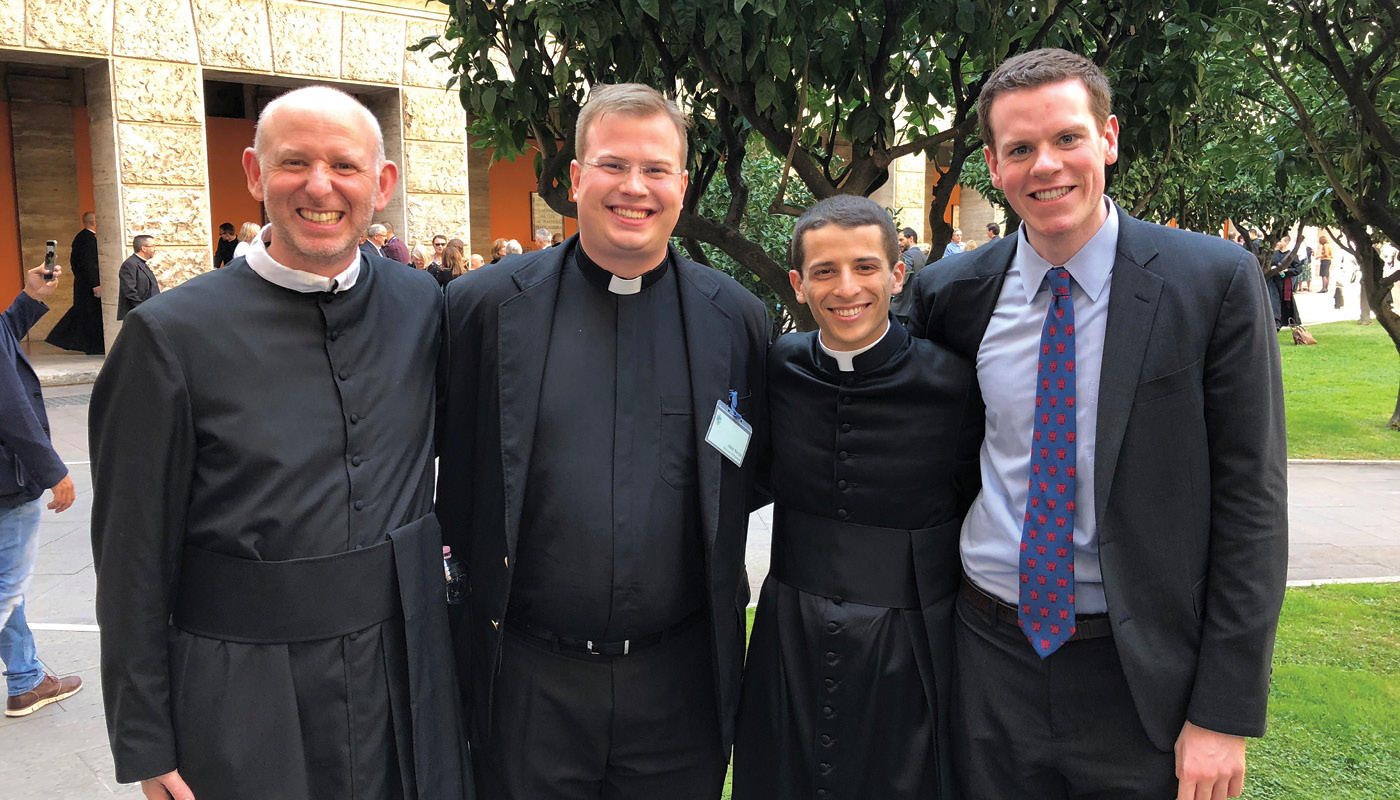 With seven recent alumni and former faculty now in formation as Jesuits and diocesan priests, the life of the Church and the vibrancy of faith are alive and well on 84th Street.

On Friday, November 3, Mr. Bendan Coffey, SJ came to Regis to speak at the junior and senior assemblies. His introduction that morning was really more of a re-introduction, at least to the seniors. Many of these young men who are in their last year at Regis remembered Brendan from their first year, as he was then still a teacher in the English department. However, at the end of their freshman year (and Brendan’s third year on the faculty), Brendan left 84th Street to enter the Jesuit novitiate for the Northeast and Maryland Provinces, located at St. Andrew’s Hall in Syracuse. After two years of discernment and preparation—which included making the 30-day Spiritual Exercises, service as a orderly at a hospice in the Bronx, and the study of the Jesuit Constitutions and the spirituality of St Ignatius Loyola—Brendan and seven other young men took their First Vows as Jesuits this past August at a church not far from their novitiate.

During his visit, Brendan spoke about his own journey of heart and soul which eventually led him to recite these vows, and shared his experiences of service to others during his time as a novice, which included time working with the dying, service in a Syracuse hospital, and teaching at a Cristo Rey high school in Baltimore.

During both lunch periods on the day of Brendan’s visit, about 30 students across all four years joined him and chatted over sandwiches about the Jesuit formation process and vocations in general.

Brendan is one of several young men who, shortly after their time at Regis, began formation as a Jesuit or toward the diocesan priesthood.

Mr. Melvin Rayappa, SJ ’08 also took First Vows this past summer in Syracuse. A native of Queens, Melvin attended Carnegie Mellon University to earn both a bachelor’s and master’s degrees in computer science after graduating from Regis. He eventually returned to New York City from Pittsburgh for a job while also discerning a possible Jesuit vocation. After his completion of the novitiate with Brendan, Melvin now is in First Studies at St Louis University toward a master’s degree in philosophy. 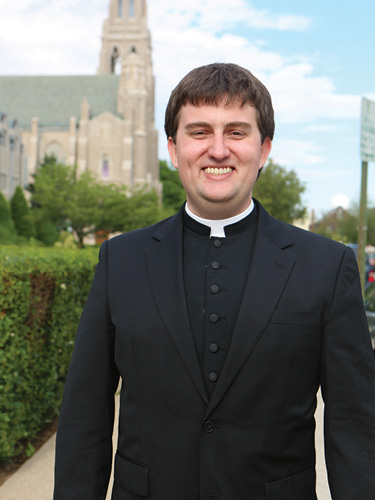 John Wachowicz ’08, who was classmates with Melvin at Regis, was ordained to the priesthood this past June at St. Agnes Cathedral in the Diocese of Rockville Centre. After Regis, John earned a bachelor’s degree in philosophy from Fordham University and entered St. Joseph’s Seminary in Yonkers soon thereafter. Since his ordination, John has already presided over the marriage of two classmates: Emily and Paul Masi ’08 in June, and Emily and Joseph Baroz ’08 in July. He also celebrated Mass in the Regis Chapel prior to a July reception honoring the class of 2008’s recent success in the young alumni annual fund challenge.

Pictured: John Wachowicz ’08 was ordained to the priesthood this past June at St. Agnes Cathedral in the Diocese of Rockville Centre.)

Just a year behind Melvin and John at Regis, two young men from the Class of 2009 are living at the North American College (NAC) in Rome and are well on their way toward the completion of their training for service as priests in dioceses.

In late September, Rev. Mr. Louis Masi ’09 was ordained a transitional deacon for the Archdiocese of New York at a Mass at St Peter’s Basilica. Louis earned bachelor and master’s degrees in philosophy from the Catholic University of America in Washington, D.C. He then moved to Rome in the fall of 2014 for his academic studies for at the Jesuit-run Gregorian University while living at the NAC. Louis hopes to be ordained to the priesthood in May 2018 at St Patrick’s Cathedral in Manhattan along with a few other men who are studying here in New York.

A year after Louis’s arrival in Rome, he was joined by his Regis classmate Mr. Alex Nevitt ’09 who is studying for the Diocese of Paterson in New Jersey. Alex completed his undergraduate studies at Macaulay Honors College at Hunter College before beginning his priestly studies at Theological College at The Catholic University of America. Alex hopes to be ordained a transitional deacon next fall in Rome.

A bit earlier on their formation as Jesuits are Mr. Brian Engelhard ’12 and Mr. Daniel Apadula ’13 who both entered the novitiate at St Andrew’s Hall this past August, just a week after Brendan and Melvin took vows and left Syracuse. Brian is a graduate of Villanova University in Philadelphia and Dan graduated Holy Cross in Worcester. The two now will engage in experiences and formation similar to Melvin and Brendan.

While many factors and graces help shape a person’s discernment and possible response to a priestly or religious vocation, over the past decade or so Regis has tried to be more intentional in inviting our students to take seriously the invitation to consider a vocation in the Church. This has included regular presentations to groups of students by Jesuits involved in vocational promotion on the province level as well as visits to Jesuit houses of formation such as Ciszek Hall at Fordham University where Brendan is now assigned.

With seven recent alumni and former faculty now in formation as Jesuits and diocesan priests, the life of the Church and the vibrancy of faith are alive and well on 84th Street. 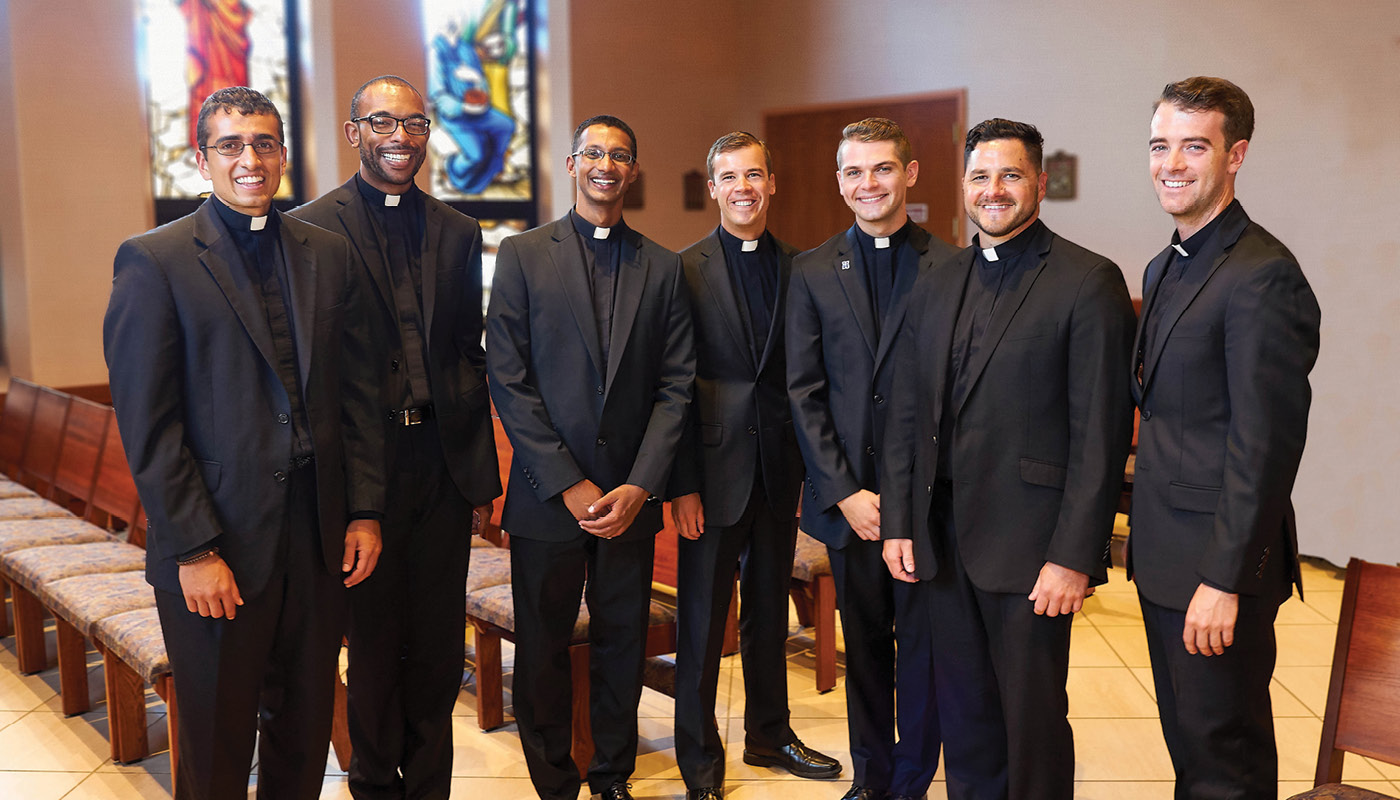 (Pictured: Seven Jesuit novices pronounced first vows at Holy Cross Church in DeWitt, New York, on August 12. Included among them were Melvin Rayappa, SJ ’08 (third from left) and Brendan Coffey, SJ (center) who served on the Regis faculty from 2012 to 2015.)