On October 11, while underclassmen were taking the PSAT exam, Regis hosted a unique Career Day experience for the senior class. Beginning with a keynote speaker, and then breaking out into smaller sessions over the course of the morning, seniors heard from alumni who spoke of their post-Regis experiences and how they found their chosen career path. The event was similar in format and in spirit to the career nights organized for many years by Mr. Frank Walsh, former Assistant Principal and retired member of the Regis faculty.

Jay Barry '96, Managing Director for Interest Rate Strategy at J.P. Morgan and current member of the Regis Board of Trustees, delivered the keynote address to the senior class. He touched on the many experiences that led him to his current position, including how the materials he studied with Fr. Bender gave him an appreciation for how to perform research on the treasury market. 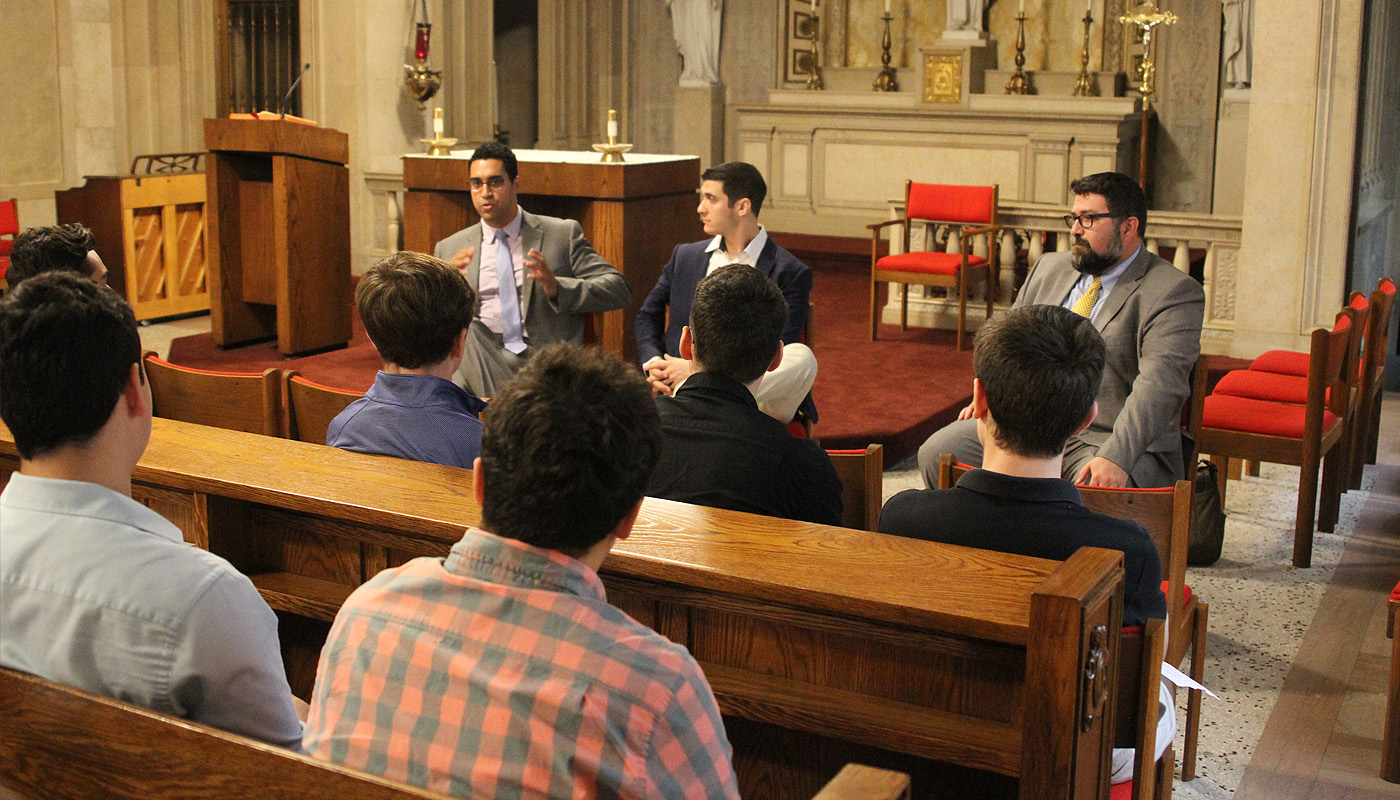 In the Library, Kevin Farrelly '72 (Private Practice), Gerard Russello '89 (Partner at Sidley Austin), James Denniston '96 (Senior Counsel for the New York Mets), and Matt Guiney '04 (Partner at Wolf, Haldensetin, Adler, Freeman and Herz) spoke about their careers in the field of Law. 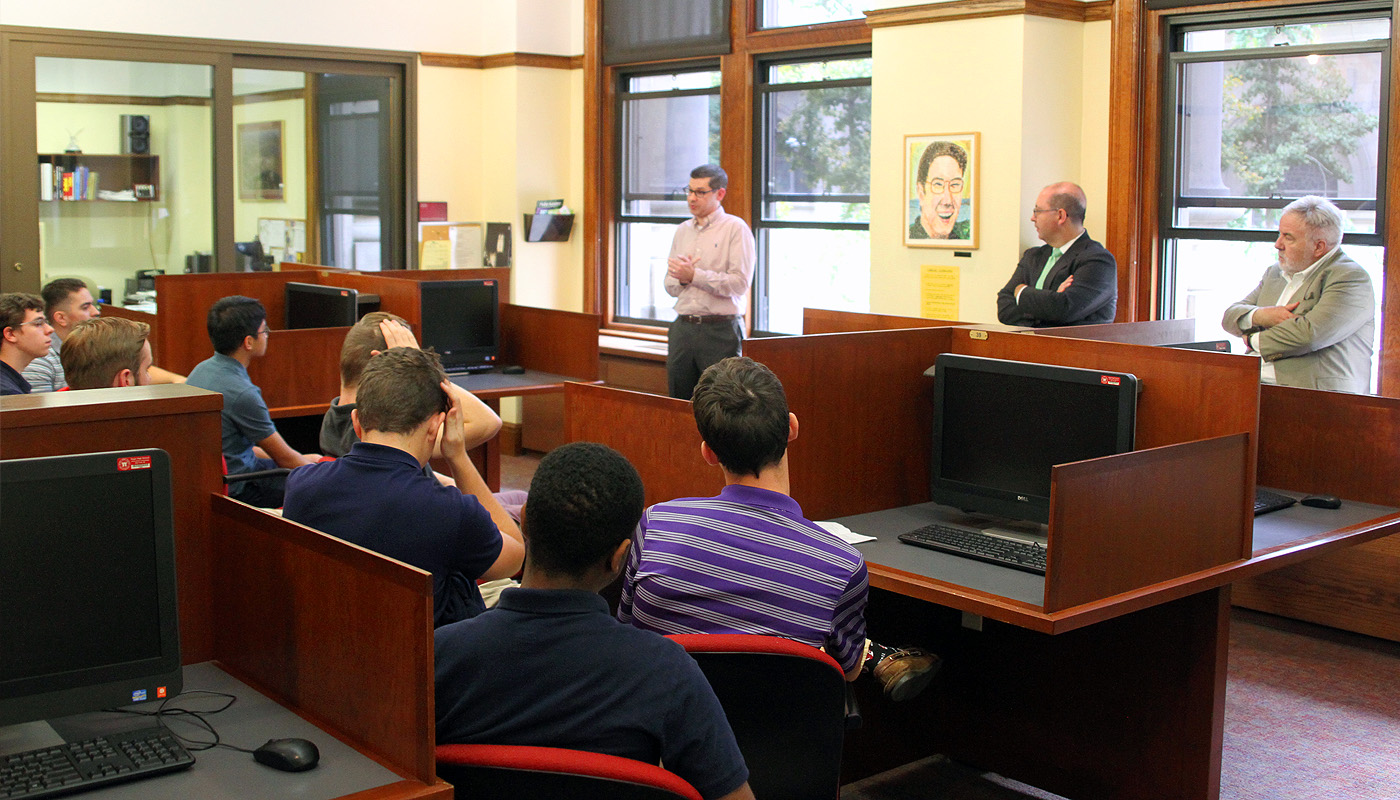 In the Cafeteria, Carlos Capellan '96 (Director of IT at J. Goldman and Co.), Sean Kennedy '98 (Chief Application Officer for Steadfast LP), Greg Hills '03 (Business Operations and Strategy at Twitter), and Steve Murphy '03 (Founder and Owner of BoomFantasy Inc.) spoke about their careers in the field of Technology. 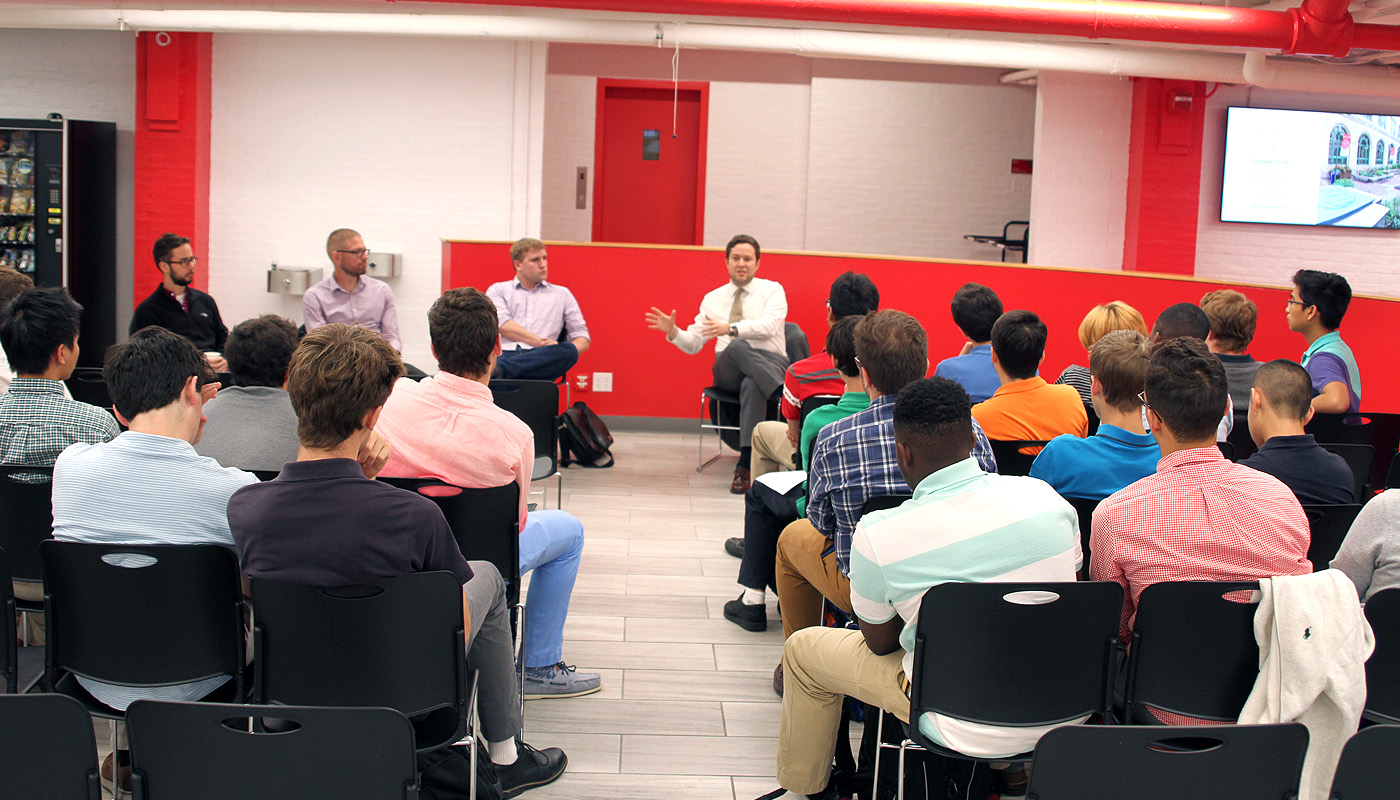 In the front of the Auditorium, Buzz Doherty '70 (Managing Director at Hycroft), Shane Conway '97 (Researcher at Kepos Capital), Terence Kannengeiser '00 (Chief Financial Officer at Strome Networks), and Robert Marcoux '03 (Vice President at JP Morgan) spoke about their careers in the field of Finance. 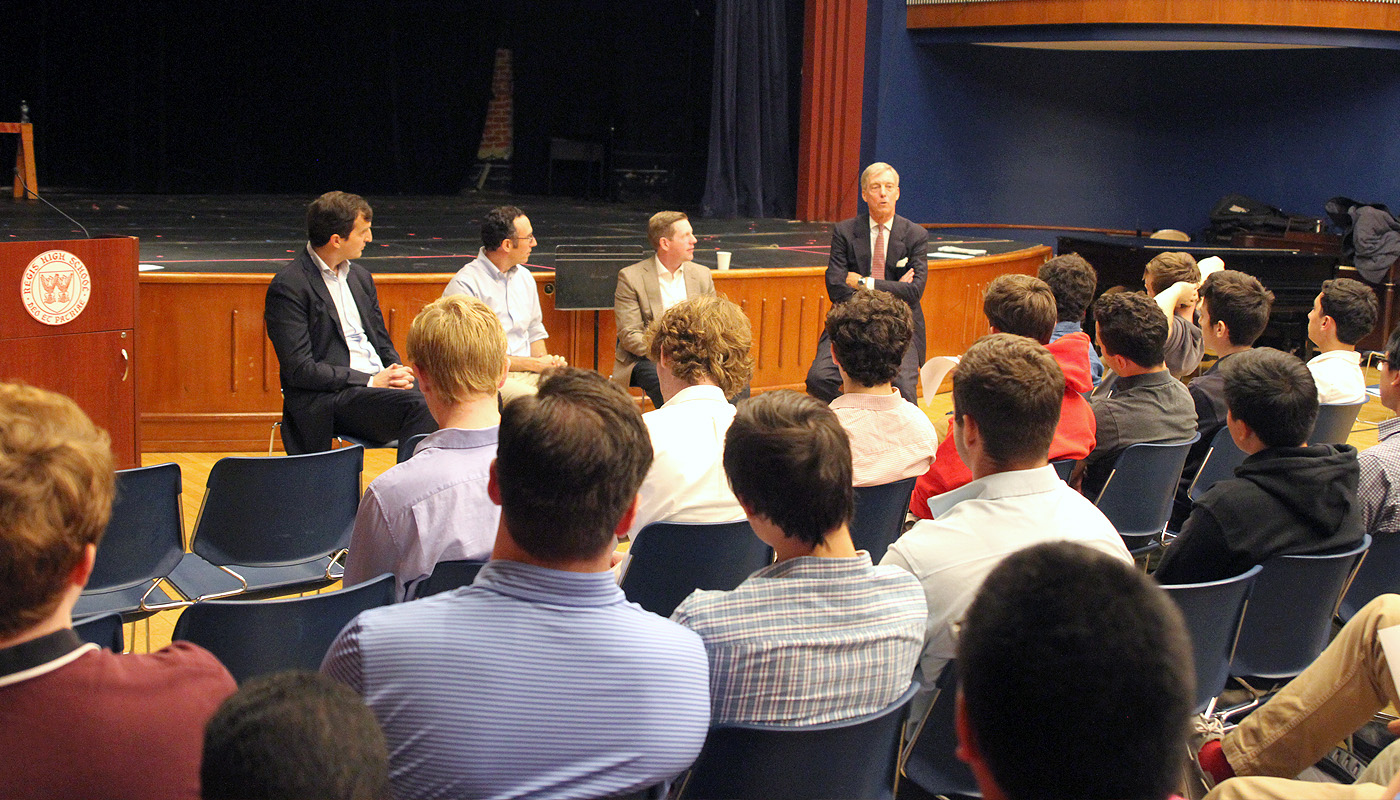 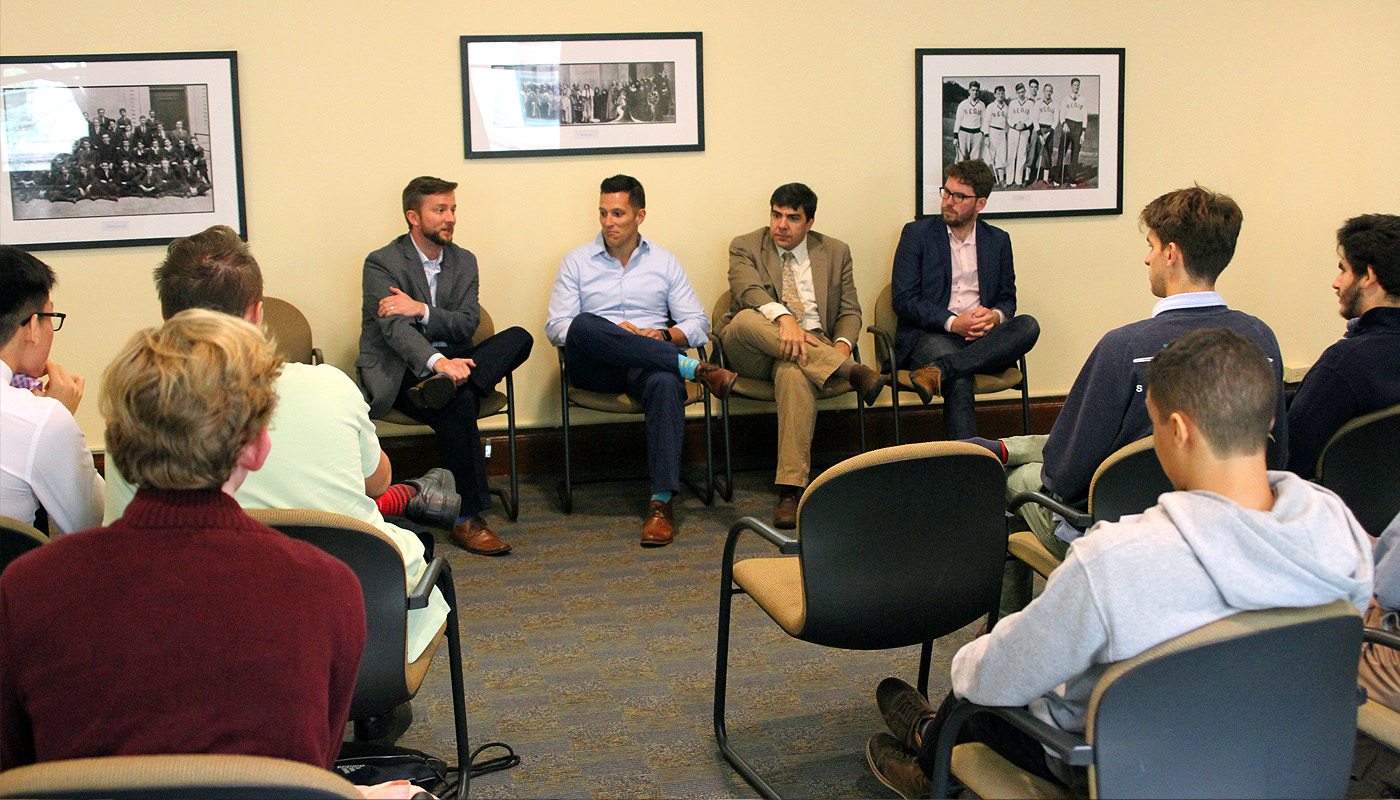 And finally, in the back of the Auditorium, Brian Kavanagh '85 (New York State Assemblyman), Ryan Heffernan '96 (Analyst at US Department of Justice), Steve Banks '01 (Assistant Commissioner at NYC Department of Labor Relations), Jonathan Masserano '06 (Senior Legislative Policy Analyst at NYC Council), and Ben Singleton '09 (Director of Analytics at NYPD) spoke about careers in Public Service and Government. 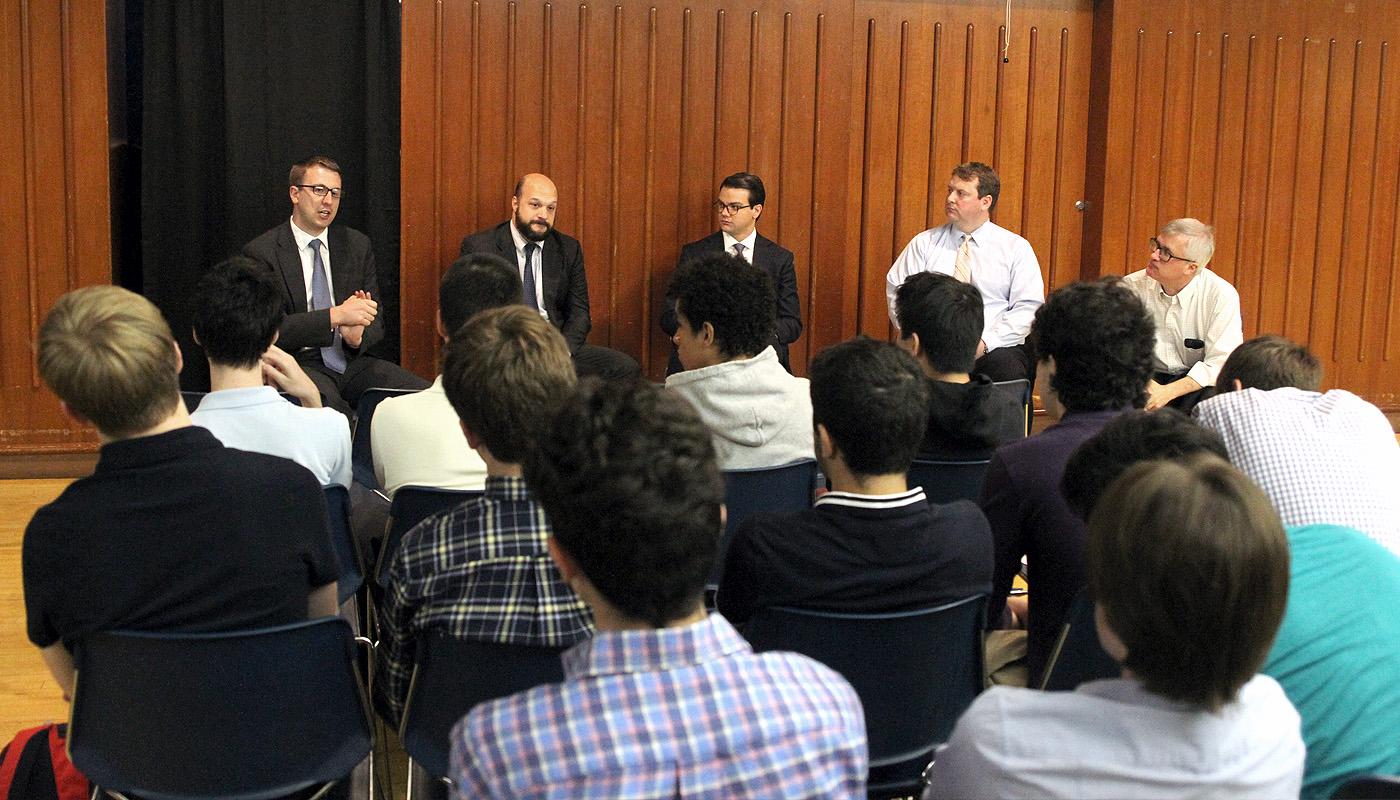 For the students, the opportunity to hear career experiences firsthand from alumni was priceless.

“The Public Service and government session was absolutely my favorite,” said Aidan Woutas ’18. “The best part of that session and the others was the relatability of the presenters. Instead of unfamiliar men in suits, these were people who used to run around the reservoir for gym class just like we do. It was also very useful to hear about their path to the job they held, including with regard to college attended, major, internships, and so on.”

Ethan Brady '18 was impressed by the strength of the network of Regis alumni. “Regis alumni always seem willing to help each other out. I met guys who worked together who went to Regis 10-15 years apart. I also learned that the road to success often takes many unexpected turns, and more and more people have to be employed for years before they discover what job is right for them.”

Andrew Ceonzo ’18 expressed his appreciation for the keynote speech. “Mr. Barry had a lot of the same interests as me when he was my age. That made it very reassuring to know that he was able to find a career that he was passionate about—and be successful—while remaining a good person outside the office.”

For Robert Marcoux ’03, sharing his morning with Regians proved to be an enjoyable experience. “It was nice to hear from the students who were just trying to understand the various jobs and industries. I thought the questions were insightful and much more wide ranging than I’m used to, including topics like artificial intelligence, new technology, the financial crisis, and ‘how is finance fulfilling’?"

Joseph Mauceri ’04 also appreciated his time back at 84th Street and enjoyed giving his own thoughts on career experiences. “Whatever you're interested in, students need to learn how to do it from the ground up,” said Mauceri. “There's a respect for managers and bosses who know how to do the job of all of the people under them. Understanding how the work of others impacts your job helps you be a better coworker.”

The large number of alumni in attendance—and the diversity of their fields of work—left a lasting impression on Andrew Ceonzo ’18. “I think it shows how much they care about the next generation of Regians. They all have very busy schedules and to come speak to us is pretty special and shows that being a Regian continues beyond your high school days.”