Below is a copy of the homily delivered at the Mass, along with photographs from the Mass.

It is always wonderful to have this opportunity to celebrate the Mass of the Holy Spirit at the beginning of the year.  New school years are filled with hope and excitement.

This morning we proudly wear red as we invoke the blessings of the Holy Spirit upon us and our work in this year ahead.  This is an age-old tradition in Jesuit and other Catholic schools, and we are take time together to pray as students at Catholic schools all across the country do the same thing during these weeks at the start of the year.

I hope you had a wonderful summer, even better than you deserved; I certainly did.  But I must admit to having been very distracted these last two weeks as I’ve watched and read about the stories of Hurricane Harvey down in Houston, a place that I called home for 15 years up until about 15 months ago.  And there have been plenty of stories of comparison with what happened with Hurricane Katrina in New Orleans in 2005. I’m sure you’ve seen pictures of both and read on your own about these massive floods.

While I haven’t been to Houston recently, I’ve talked to many people about their experiences, including my brother who had 22” of water in the first floor of his home.  The stories of devastation are heart breaking.  But there are also stories of grace.  Perhaps similar to stories you and your families may have experienced during Superstorm Sandy.

Allow me to tell you my story from Hurricane Katrina in 2005.  It happened with two other Jesuit high schools, but it is part of our Jesuit history, and it’s worth knowing.

On Saturday morning, August 27th, 2005, I was going skydiving for my first time to help a friend celebrate her 50th birthday.  It was a clear day (although I was hoping for a storm that would have grounded us).  At 14,000 feet all was clear and bright, without anything to fear as far as the eye could see.  (Nothing to fear, except for the ground 14,000 feet below me.)  Little did I realize that just beyond the horizon lurked a storm named Katrina and the devastation, destruction and dismay that would flow in her wake. 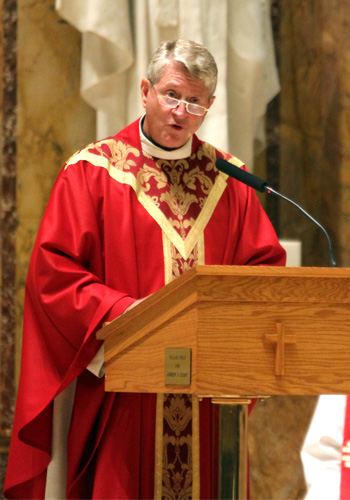 It all started for me a few days later on Tuesday with a phone call from our Admissions Director at Strake Jesuit; I was president. “Father, we've had two calls from students from Jesuit High School in New Orleans wondering if they could transfer here.  What should we say?”  The levies there had been breached and the city was flooding.  News reports around the clock showed the waters rising, and the people fleeing.  Houston was preparing for the onslaught, and was her usual welcoming self to those in need.

“Yes, of course,” I said.  “But maybe we should get together to talk about it.”  So I called a meeting of our administrative team to discuss this: taking a few students from New Orleans who might be looking for a new home.  We had already received more calls by the time we met later that day, and it was unanimous, we would take any high school student from Jesuit High who was looking for a new home.  Our response anticipated taking maybe 25 new students; we would work them into our classes and welcome them as our own.  We were a school of about 800 students at the time, and could squeeze in a few more if we had to.

Only one member of our group that day thought our predictions were off the mark; only one staff member – from Louisiana – imagined far more people than the couple dozen the rest of us anticipated.

The calls kept coming.  We now had an answer.  Any high school student from Jesuit High in New Orleans was welcome.  “Show up at the Student Center Tuesday morning after Labor Day at 9:00, and we'll be ready for you.”

By the evening of that meeting our numbers had grown to 100 students.  By Friday night, the day of our Mass of the Holy Spirit, the number had ballooned to over 200.

Our plans changed daily.  We would have to add classes.  We would split current classes so that our Houston students and the New Orleans students both would be in the original classes and in the new classes.  We rented two trailers with two temporary classrooms each to cover additional classroom needs.  How would we fit everyone in our small cafeteria?  (Nothing like our new cafeteria!)  The seating capacity only 299.  Well, we would have to have two lunch periods instead of the usual one.

While we were worrying about classes and lunch, the Parents’ Club was busy working on a proper welcome for these students, and their families.  People wouldn't have clothing, so the Moms got clothes for those who needed them.  They wouldn't have school supplies, so the Moms got backpacks and filled them with necessary items.  They wouldn't have homes, many of them, so our families opened up their homes to students, to families, and as eventually happened, to Jesuit High faculty members who showed up later to help teach.

At the Mass of the Holy Spirit just days before everyone was scheduled to arrive, I said:

When we are joined next week by hundreds of new students, there might be some initial sense of fear for a variety of reasons, but we do so with peace knowing that this is what Jesus Christ asks of us.  And we do it recognizing that there is one Holy Spirit who blesses us all with a variety of gifts.  Gifts which we humbly share with our brothers from New Orleans, and they’ll share with us.  Gifts of the Holy Spirit that we each share as members of this one community as we begin this new year.

Four days later on Tuesday morning after Labor Day, our entire student body gathered again and we prayed together for what was about to happen.  I said:

We don’t take in these students because it’s easy, or fun, or good PR, or even because they’d do it for us.  We do it because it is the right thing to do.  You will be faced with similar situations often in your own lives.  Often.  Doing the right thing, even when it is difficult.  This is being a Man for Others.

In the end, those two phone calls that turned into 25 that turned into 100, that turned into 200, turned into 440 Jesuit High School students from their five grades, 8th to 12th.  In the end, we didn't split classes, we started a school within a school, a Second Session, so that their students were taught their classes by their faculty from 3:30 to 9:00 PM five nights a week – Sunday to Thursday.  You can't ask a high school student to go to school on a Friday night in Texas – there are football games to go to!

Yes, in the end, it was one of the most amazing things that any school has ever done, and if I had known what we were getting ourselves into, I'm not sure I would have made the right decision.  I may have been too afraid.  Oh, did I mention that we took in those 440 students without charging them any tuition at all?  Perhaps a precursor to my Regis days!

Yes, if I had known, the fear might have been paralyzing.  It may have prevented me from making the right decisions.

As I look back on those days, and that semester, I clearly see the Holy Spirit at work.  Fear can be paralyzing.  It would have kept the disciples behind locked doors.  But the Holy Spirit unlocked the doors and unlocked their hearts.  The Spirit did the same with my school community.  He interceded for us, just as we hear about in the reading from Romans.  I have NO doubt, what we did for all those people in Katrina, would not have been possible if not for the Holy Spirit.

On the ten-year anniversary of Katrina in 2015 I received a note from the Alumni Director at Jesuit New Orleans who was with us during that time.  He wrote to me, “I have been thinking of you and the Strake Jesuit community a lot this week as we commemorate the 10th anniversary of Katrina.  As I look back on the catastrophe, the exile, the hurt, I clearly see God’s hand in the healing that I and others experienced.  And when I look deeper, past that hand, I see a comforting face.  I see you, I see your community.  Thank you.”

The amazing stories you and I have heard coming out of Houston don’t surprise me.  New York has had its experiences with hardship and terror, of course, so you know too – people are resilient, people are caring, people are called to do the right thing.  The Holy Spirit does work! 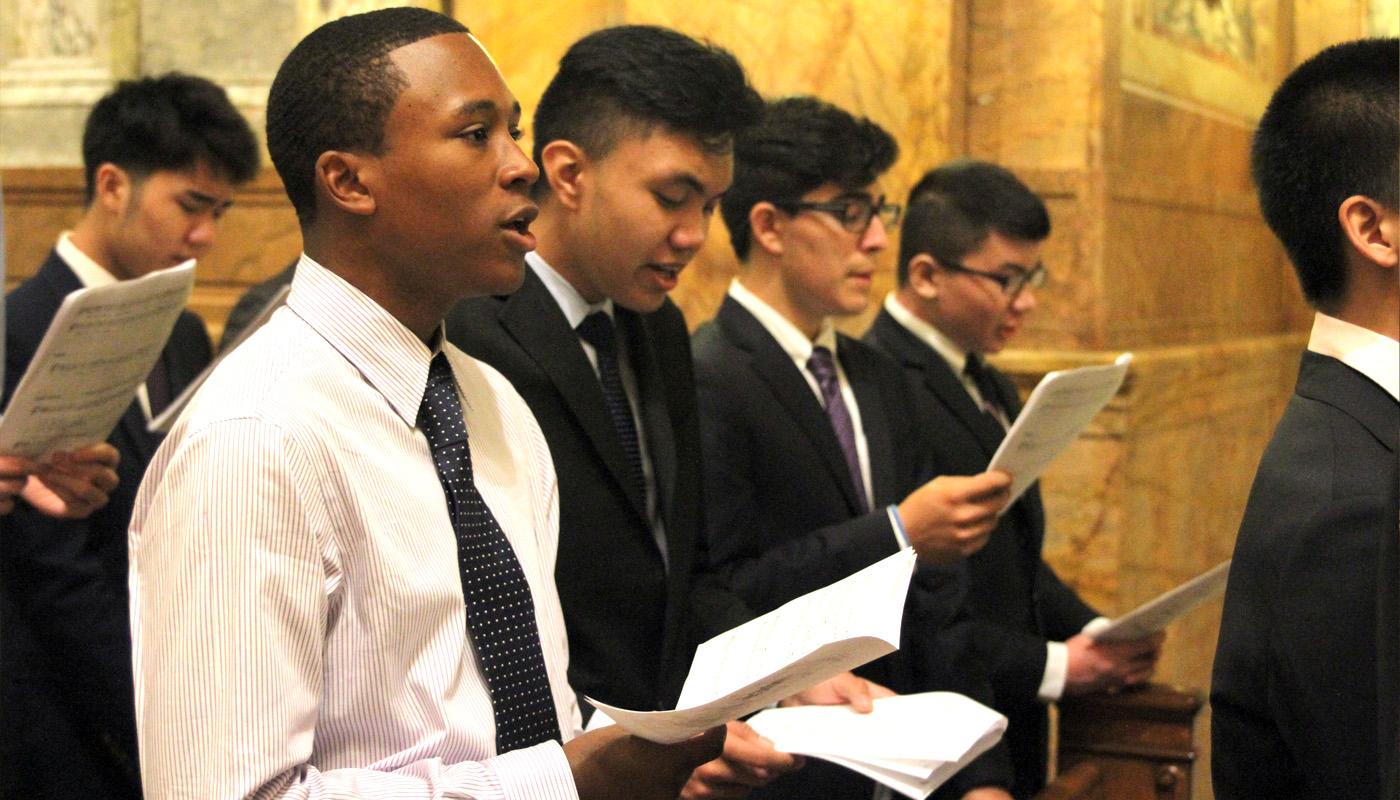