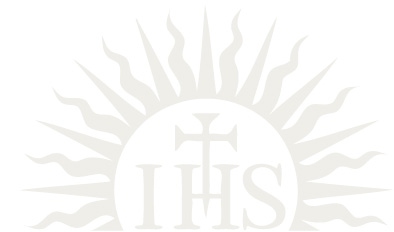 I write to introduce a new feature of the Regis News magazine which we hope will be a regular column in subsequent issues.

In the Spring issue of the Regis News, Fr. Lahart wrote about how much he enjoyed joining two student retreats this past school year, an Emmaus Retreat with seniors and a Quest Retreat with sophomores. He found his time with the students and faculty and staff colleagues to be “wonderful experiences.” Most everyone who has gone on a student retreat echoes that comment, usually stated rather more exuberantly. Like most every other program at Regis, student retreats have evolved over the years and have been for several decades a deeply integral part of the Regis experience.

Central to the Quest retreat are the talks given by the upperclassmen who accompany the sophomores. The topic of the final talk of the retreat is the “fourth day.” The retreat is often a powerful, and at times transformative, experience which unfolds over three days and the “Fourth Day” talk opens the students to the days which follow the return to school and the normal, everyday activities that they go back to. The challenge is to take the rich experience of the retreat and live it in the midst of the usually overly busy days at home and school. Finding God in all things is a hallmark of Ignatian spirituality, but something that can easily be overlooked in the heavy demands in the life of the typical Regian. Often, the “Fourth Day” talk invites the retreatants to further deepen their relationship with God and to live that relationship in practical ways.

I have come to think that what I write very briefly here about Quest and the “fourth day” applies just as well to the experience of Regis as a whole. Like the three days of Quest and the other retreat experiences the four years at Regis can be transformative. I have heard this repeatedly in my six years at Regis, most especially in the 2015-2016 school year when I had the privilege of serving as interim president. Every alum I met could tell in detail the profound difference his attending Regis made in his life and, over time, in the lives of so many others. The focus of the annual fund that year was celebrating “Generous Lives.” I became familiar with the stories of so many alumni living faithful, loving, generous, committed lives—the “fourth day” lived every day. In the style of the “fourth day” talk, perhaps we can think of the rest of one’s life after Regis as a “fifth year” rather than a “fourth day.”

Last year a group of faculty representing the Campus Ministry Office, the Theology Department, and the Christian Service Program engaged in an in-depth discussion informed by input from a majority of the student body on the integration of the student experience of retreats and prayer (including Mass), what students are learning in their theology classes and what they draw out of their participation in a variety of service opportunities over their four years. The aim was to better understand the extent to which students make the connections between these three areas which are a significant part of the overall school curriculum. Ideally, theology classes provide students with context, concepts and language to articulate their faith which is both grounded and expressed in worship, prayer and service—all of which in turn further inform what they study and learn in class. It is a dynamic interplay which we don’t always effect as well as we might, but which we continuously seek to find ways to help students deepen in their lives and in our own lives as well.

Through sharing resources, reflection pieces, prayer and retreat opportunities and a wide range of other material this “Fourth Day” column aims to support and, we would hope, enrich your life of prayer and worship, theological reflection, and service. And perhaps contribute something to your own living out of the transformative experience of Regis in the same way that current students seek to live out the richness of their Quest, Emmaus, and other retreat experiences. Walking together and accompanying each other on what is ultimately a common journey toward a shared destination can, like the disciples on the road to Emmaus, cause our own hearts “to burn within us” so that we, too, may “set the world on fire” as they did.