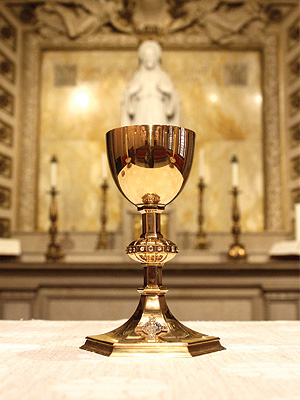 The story of Regis High School’s Founding Family is one of vision and selfless generosity that endured for over a century. The story began when Mrs. Julia Grant handed Rev. David Hearn, SJ an envelope just before Midnight Mass at the Church of Saint Ignatius Loyola on December 24, 1912. The envelope contained a $500,000 check as an initial installment towards the foundation of the tuition-free Regis High School. In less than three years, Mrs. Grant gave an astonishing $1.724 million towards the establishment of Regis—the equivalent of approximately $40 million in today’s dollars. She provided essentially all the funds required through the early decades, and her children continued the tradition after her death in 1944. Providing a Catholic education to high school boys at no cost—especially to those who would otherwise not be able to afford an education—was the mission.

(Pictured: The Foundress’s Chalice is one of a few relics from the Founding Family on display at Regis. The chalice, which is still used during special community Masses, serves as a reminder to today’s students of the generosity that founded Regis.)

The idea of a tuition-free, Jesuit education was rooted in the wishes of St. Ignatius at the time of his founding of the Society of Jesus in 1540. St. Ignatius desired for Jesuit ministries (like spiritual direction and the celebration of sacraments) and any apostolates the Society might take on in the future to be available to rich and poor alike. Despite the lofty goal of only opening a Jesuit school if it could be fully endowed, most schools never meet that standard and eventually resorted to other methods to remain open. Regis, too, was never fully endowed.

Rev. Anthony D. Andreassi, CO, Regis Archivist and author of Teach Me to Be Generous: The First Century of Regis High School in New York City, explains that “after providing the money to buy the property and build the school between 1912 and 1914, the Foundress also gave the gift of a large of sum of gilt-edge bonds, the income from which helped support the school for the next half century or so. But the interest from these bonds often just barely covered the operating expenses of the school and often the Jesuit province, far less than what was really needed to support the Jesuits who worked here.” On a few occasions, special gifts were given by the Foundress or her children, such as the development of the Upper Gym in 1958 with a donation of $300,000.  “But these gifts were not given with any regularity and could not be depended upon,” added Andreassi.

In the late 1960s, Regis first began the formation of a fundraising committee to help deal with the increasing financial difficulties of the times. High inflation—coupled with a now-predominantly lay faculty that required salaries—left Regis in a dire financial situation. Hugh Grant, Jr. provided several gifts during this period to keep Regis’s doors open, including a Christmas 1975 gift of $100,000. Regis also began investing in stocks, as opposed to the bonds-only investments that had been standard up until that point. Though it was a grim financial period for Regis, the Founding Family was there to keep the mission alive. 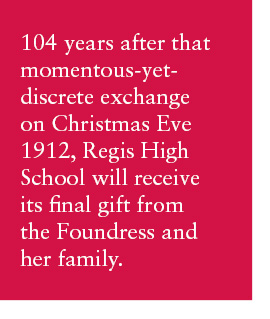 By the time of Hugh Grant, Jr.’s death in 1981, Regis was well on its way to sustaining itself through the support of its alumni, families, and friends. A final gift from the Founding Family of roughly $10.2 million was stipulated in Hugh Grant, Jr.’s will, though the process of executing the estate would not begin until the death of Lucie Grant, his widow, in 2007. With the final disposition of the estate in process in 2013, the gift was recorded as part of the Strong to Endure capital campaign, with the expectation of payments beginning sometime thereafter. An initial payment of $5.4 million was received in March 2016. This spring, Regis will receive the remaining balance of approximately $4.8 million.

104 years after that momentous-yet-discrete exchange on Christmas Eve 1912, Regis High School will receive its final gift from the Foundress and her family this spring. The understatement of receiving this gift by a simple wire transfer is reminiscent of the modesty of the family and the anonymity they desired throughout their lives. “This is a story that is unparalleled in American philanthropy,” says Rev. Daniel K. Lahart, SJ, President of Regis. “More than 104 years after the Foundress made her first gift for Regis to Fr. Hearn on Christmas Eve 1912, this spring we will receive a final, generous gift from the Foundress’s family. While the Founding Family has died out, the Foundress lives on through the lives and good works of every Regian.”

This final gift will be added to the Regis endowment, bringing the fund’s total to approximately $84 million. Through the endowment, it will benefit students forever. Fr. Lahart notes that, “this gift reminds us also that we are now ‘on our own.’ Clearly an $84 million endowment can’t support a school with an annual budget of $14 million, so our future remains in the hands of our benefactors.”

More than a century after the founding of Regis, a small number of artifacts remain as treasured relics connecting us to the generous lives led by the Founding Family. The Chapel, for example, displays a collection of relics given to the Foundress by Franz Xavier Wernz, SJ, the twenty-fifth Superior General of the Society of Jesus. Fr. Wernz had named Mrs. Grant a Founder of the Society of Jesus for her efforts and generosity to establish Regis High School. In March 1914, while the Regis building was under construction, Mrs. Grant and her family traveled to Rome where Fr. Wernz presented her with the reliquary, believed to include relics of all of the Saints and Blesseds of the Society of Jesus at that time.

In 2009, an anonymous alumnus purchased at auction—and immediately donated to Regis—the chalice which was used during daily Mass at the Founding Family’s townhouse. Members of the Class of 1962 also purchased the pocket watch of our Foundress at auction and donated the artifact to Regis. In addition to these items, Regis possesses the Monstrance from the Founding Family’s chapel, a handful of portraits of the Foundress and her children, and the diaries of Fr. Hearn and Hugh Grant, Jr., where the many financial gifts to Regis are detailed.

At the Regis Centennial Gala in October 2014, Rev. Joseph M. McShane, SJ ’67 delivered a keynote address in which he reflected on the generosity of our Foundress. “Every Regian is haunted by the realization that his life was transformed by an unearned gift of pure grace from a woman whom we only knew as the Foundress,” said McShane. “We were and are the adopted sons of generosity. And what boundless, inexplicable generosity it was.”

This June, three years after the school’s year-long centennial celebration, Regis will celebrate another historic milestone with the graduation exercises for its 100th graduating class. “I have to imagine that the Foundress and her family would be extremely proud of all that they created and nurtured—100 graduating classes of young men who have received a full scholarship for a Jesuit, Catholic education,” said Fr. Lahart. “It is a remarkable gift they have given to generations of Regians, and those thousands of graduates have in turn given back to their communities, their country, their Church, and to Regians who have come after them. It is an incredible legacy.”

The Founding Family’s legacy has become the legacy of the entire Regis family. It is the responsibility—and the privilege—of alumni, families, and friends to ensure that Regis has the vision and resources required as it continues into its second century. The Regis community will forever salute the Foundress and her family for their embodiment of the Magis: the Ignatian ideal of seeking always to do more “for the greater glory of God”. Over 104 years after her initial gift, the Foundress remains an exemplary model for Christian giving and an inspiration to the entire Regis community. 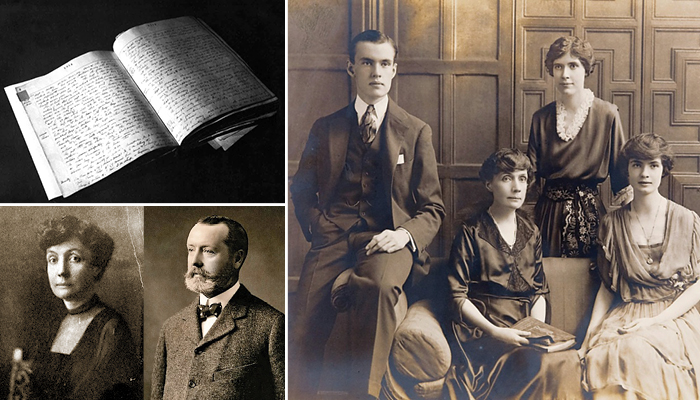 Bottom left: A portrait of Julia Grant, our Foundress, and Hugh Grant, the former mayor of New York City (1894-1898). 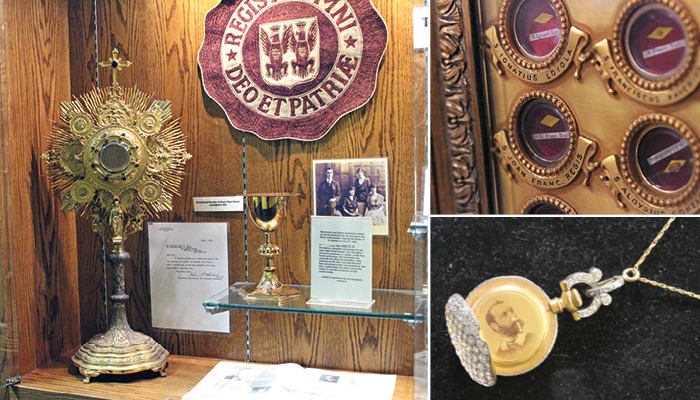 Left: A display at Regis showcases the Monstrance used in the Chapel of the Holy Spirit, a chapel built inside the Grant home in 1914 around the same time that Regis first opened its doors to students.

Top right: Relics of St. Ignatius Loyola and St. John Francis Regis are among the 22 relics in the Foundress's reliquary, which is on permanent display in the rear of the Regis chapel. It is believed to include relics of all of the known Saints and Blesseds of the Society of Jesus in 1914.

Bottom right: The Foundress’s watch pendant, crafted in the early part of the 20th century as a memento of her late husband, was donated to Regis in 2009 by members of the Class of 1962 who purchased it at auction. 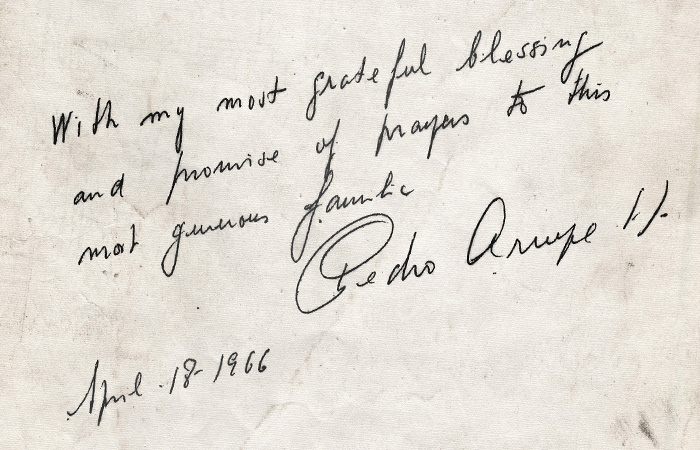 A note left for the Founding Family by Pedro Arupe, SJ, the 28th Superior General of the Society of Jesus. On April 18, 1966 Fr. Arupe visited the family's townhouse chapel where he celebrated Mass.