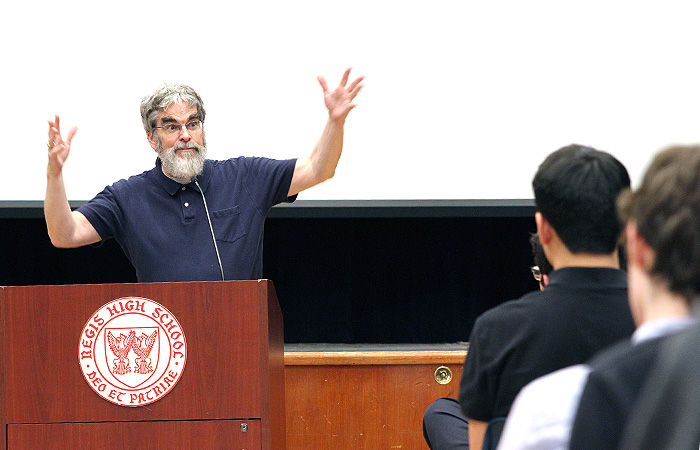 Immediately following afternoon advisement on Thursday, March 2, Regians welcomed Br. Guy Consolmagno, SJ to Regis. Br. Consolmagno, an astronomer and Director of the Vatican Observatory, treated students to a talk about his career in science, his journey to become a Jesuit brother, and the importance of each of us pursuing those things for which we are most passionate. In doing so, he encouraged Regians to "throw yourself with enthusiasm into everything."

Following his presentation, Br. Consolmagno answered questions from students on topics ranging from the potential for life on other planets to what it's like having an asteroid named after him. Before concluding, Br. Consolmagno reiterated that students should never be complacent when it comes to pursing knowledge.

"Go out there and make yourself more aware of something you thought you knew, that it turns out you don't. Make yourself scared," said Consolmagno. "Make yourself feel stupid. If you're not feeling stupid, you're not challenging yourself." 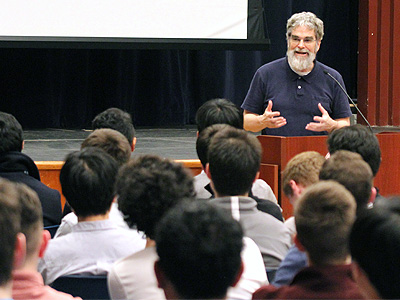 "I appreciate that he spoke about how Latin and Greek helped him be a good scientist, how his yearbook experience, his English and speech classes helped him present his results," said Matone. "In other words, there is more than doing the science, there is also the essential ability to present your results. And just to see him encourage our students to find their passion – that was refreshing."

Nicholas DeLuca '18 found the talk refreshing, and found the purpose to be less about science and more about the intersection of faith, science, and the formation of the whole person.

"As he recounted his own high school experience and the path that eventually led to his vocation," said DeLuca, "I found various similarities to my own experience. He brought to my attention that character formation is not something that takes place over night."

Andrew Sullivan '18 shared similar thoughts. "His speech helped me to further understand, as Catholic student at a Jesuit high school, that there is a wide array of opportunities for me to further explore the scientific subjects that I am so very interested in," said Sullivan.

A graduate of MIT, Br. Guy Consolmagno, SJ is the author of numerous books including his most recent, titled Would You Baptize an Extraterrestrial?. On July 2, 2014 he was awarded the Carl Sagan Medal for outstanding communication by an active planetary scientist to the general public by the Division for Planetary Sciences of the American Astronomical Society. He is known as "The Pope's Astronomer" after being named by Pope Francis to be the Director of the Vatican Observatory in September 2015.

Embedded below is a recording of Br. Consolmagno's presentation to Regians. 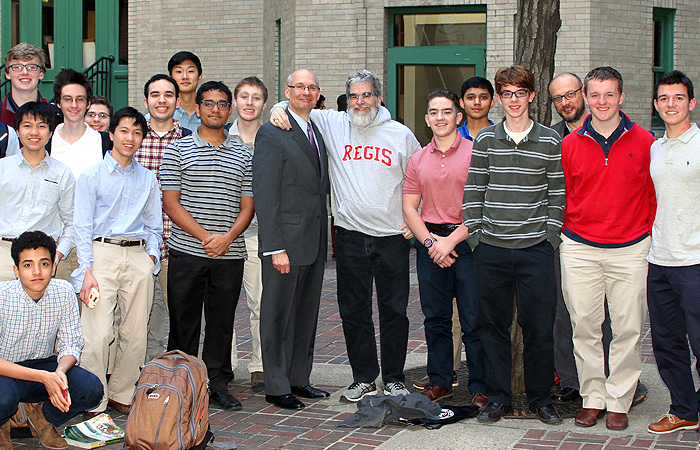 Above: Along with Dr. Gary Tocchet (Principal) and Dr. Luca Matone (member of the Science Department faculty) students catch up with Br. Guy Consolmagno, SJ in the Quadrangle for a quick photo immediately following his presentation.