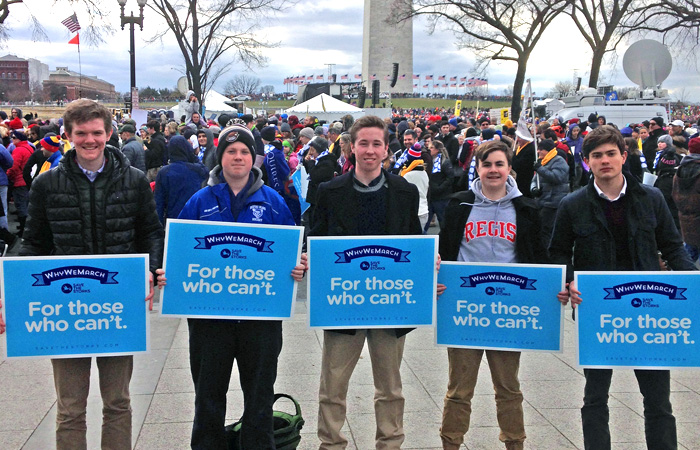 On Friday, January 27, five sophomore members of Amate Vitam, Regis’s Pro-Life Club, boarded a bus to Washington, D.C., to join tens of thousands of people, young and old, in the 44th annual March for Life. The hope-filled day of prayer and witness occurs each January in peaceful protest of the Roe v. Wade Supreme Court decision that legalized abortion in 1973. From start to finish, the March for Life was a beautiful demonstration of the dedication that so many Americans have toward the foundation of justice and of all human rights: the right to life.

The Regians arrived early in the afternoon, shortly before the March kicked off. "I was blown away by the amount of people that came out from all over the country to support the March for Life," Jimmy Corrigan '19 said. "It was really inspiring to see so many people supporting the Pro-Life Movement." As the small Regis delegation joined the marchers, they met and conversed with groups, schools, and organizations from all over the country, including the Diocese of Wheeling-Charleston of West Virginia, the University of Notre Dame, and fellow Jesuit high school Gonzaga Prep. Sean McCabe '19 was surprised by the national reach of the March. "I never could have imagined how many people from all around the country are devoted to protecting the sanctity of life."

The Regians also met and conversed with fellow pro-lifers from the New York area, including several New York priests, seminarians from St. Joseph’s Seminary, and a number of former students of Amate Vitam co-moderator Mr. David Bonagura '99. Brian Golinski '19 and Thomas Gilmore '19 each ran into members of their families and home parishes en route.

The marchers journeyed down Constitution Avenue to the Supreme Court building, the terminus of the event. After this, the Amate Vitam members walked to the nearby Church of St. Mary, Mother of God for a votive Mass celebrated for the Holy Innocents. In this church that was packed mostly with young people, they heard a stirring homily about how the humility and chastity of St. Joseph is a model for all of us as we work to foster life and family here in these United States. It was a fitting way to punctuate the day’s focus.

Immediately after Mass, the group boarded the bus for their long drive back to New York. On the way home, the bus stopped for dinner at a Delaware rest stop just off of I-95. The large facility was completely packed with so many Pro-Lifers who were also on their way back home. There the Regians met a few more familiar faces inside before continuing the trip home.

Reflecting on the March, James McGibbon '19, who attended the event once in grade school, commented, "When I was younger, I didn't realize the sheer number of people who support this movement, and the passion with which so many do support it. I could see the vibrancy of the supporters, and it reminded me of the value of the lives we were marching for."

Brian Golinksi '19 agreed, "Being able to go to the March For Life with fellow Regians was a great experience that allowed me to reflect on what it means to be a Catholic with very close friends whom I proudly call brothers."