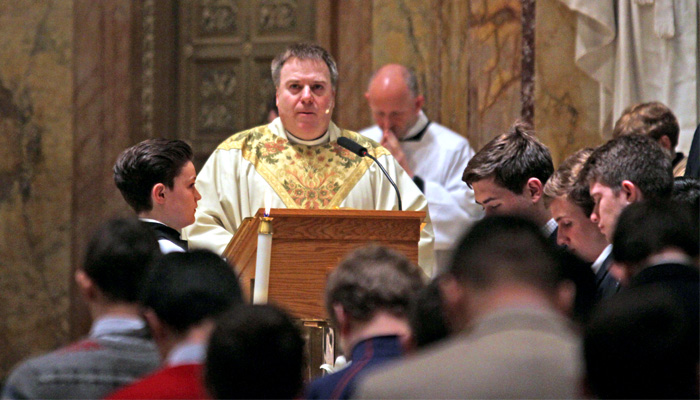 Congratulations and best wishes to Fr. Ian Gibbons, SJ on his recent selection as the next principal of Saint Louis University High School. A Jesuit, all-boys school with approximately 1,100 students, SLUH is the second oldest Jesuit school in the United States.

Fr. Gibbons has been a standout Assistant Principal since first arriving in the summer of 2014. He has been a leader in launching a new leadership development program for Regis students, and was instrumental in fielding Veracross as our new student information system. He has also done much to improve our first year teachers' meetings. His dedication to working with students, faculty, and parents alike has been selfless and untiring. He has also kindly tended to the sacramental and spiritual needs of the Regis community.

Originally from St. Louis, Fr. Gibbons entered the Jesuit order in 1995 and was ordained in 2006. Previously he has assisted with student affairs at Regis Jesuit in Denver, created English programs at Fényi Gyula Jezsuita in Miskolc, Hungary, and worked in Development at Strake Jesuit College Preparatory in Houston. After ordination, Fr. Gibbons spent six years as the Pastoral, Service, and Faculty Formation Director at Rockhurst High School in Kansas City. While at Rockhurst, he also served as the NFL's Catholic Chaplain for visiting football teams.

Over his career, Fr. Gibbons has taught economics, history, scripture, world religions, and business accounting. In addition, he has spent more than a year in the Belize missions, and he published a paper on zero inflation economic policies with the Federal Reserve.

Fr. Gibbons will conclude his tenure as Assistant Principal at Regis on June 16 and will be sorely missed. Please join us in wishing Fr. Gibbons success in his new assignment and in his continued career as a committed Ignatian educator.