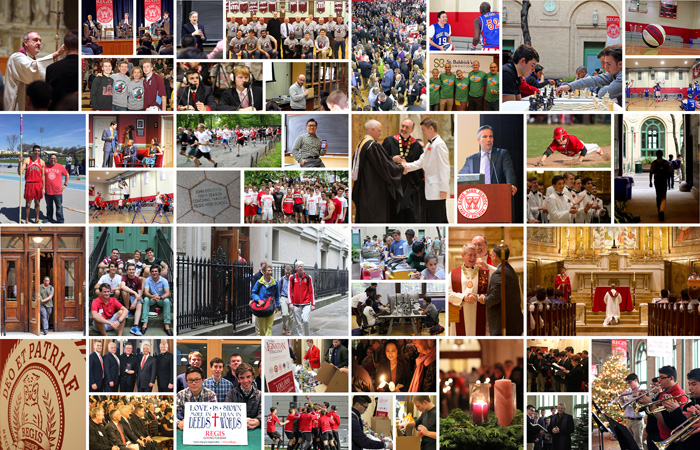 As 2016 comes to a close, the Regis High School community reflects on—and gives thanks for—a year rich with achievements and blessings. Below are a collection of photographs from various events and happenings that took place within our community this past year. Regis High School wishes the extended Regis community a happy, healthy, and prosperous New Year. 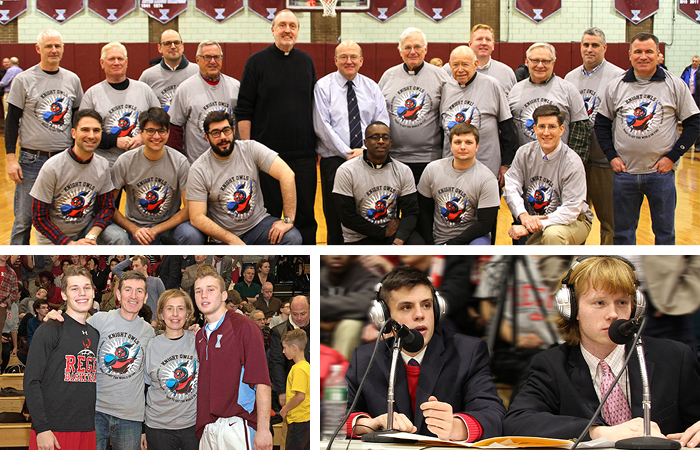 In January, a group of "Knight Owls"—those with affection for both the Xavier Knight and the Regis Owl—gather for a group photo at halftime of the Regis-Xavier varsity basketball game. Finn Kinsella '16 and Rory Kinsella (Xavier '17) pose for a photo with their parents before the start of the game. Jack Beyrer '17 and Brendan Ryan '17 announced the Regis-Xavier tripleheader for a live broadcast stream. Beyrer described the opportunity as "one of greatest experiences in my Regis career." 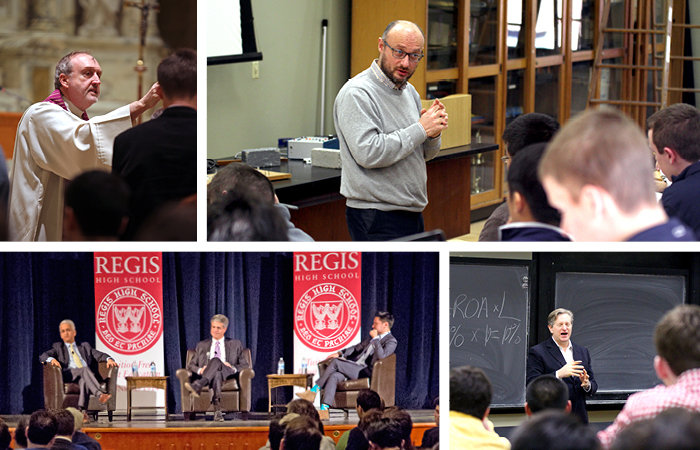 Fr. Croghan, distributed ashes during Ash Wednesday Mass at Loyola Church in February. News broke in February that Dr. Luca Matone helped LIGO “Listen to the Heavens”, as the Regis physics teacher was part of worldwide team of scientists who detected gravitational waves, confirming for the first time a prediction of Einstein's Theory of General Relativity. ESPN’s Pablo Torre ’03 moderated a discussion on The Business of Sports featuring Sunil Gulati P’16 (President, U.S. Soccer Federation and FIFA Executive Committee member) and Joseph Leccese ’78 (Chair, Proskauer). Steve Eisman, the real-life inspiration for Steve Carrell's character in the blockbuster movie The Big Short, visited Regis and recounted for Regians in detail the investment strategies and decisions that led to the greatest financial crisis in modern history. 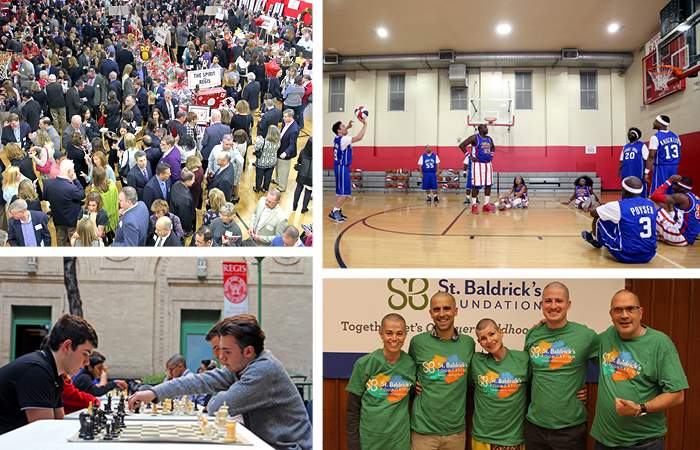 This year's Parents Club Auction proved to be another record-breaking event for Regis. The Tonight Show's Jimmy Fallon and The Roots challenged the Harlem Globetrotters to a game of basketball in the Regis High School gym in March. The segment aired during the March 30, 2016 episode of The Tonight Show. Chris Mignano ’17 and Alex Bruno ’16 take advantage of a warm March afternoon and participate in a chess club gathering in the Regis Quadrangle. Faculty members "brave the shave" and pose for a photo after having their heads shaved during the student-run St. Baldrick's Foundation event and fundraiser. 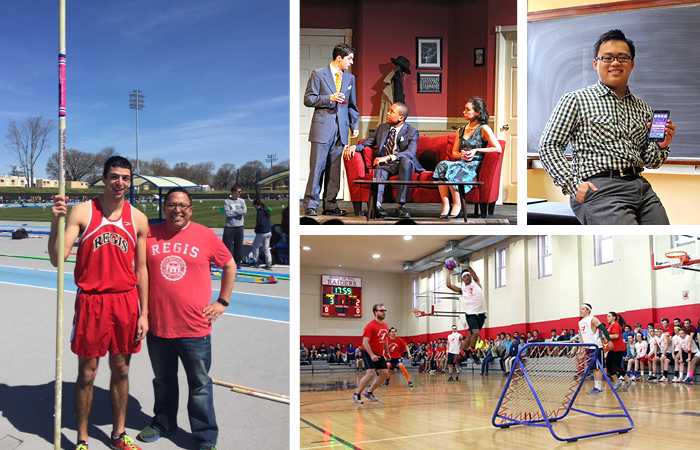 At the New York Relays on April 15-16 at Icahn Stadium, Adriano Atallah '17 became the first athlete in 103 years of Regis track and field to complete a decathlon. The Regis Repertory produced a claustrophobic and riveting performance of Hitchcock's psychological thriller Dial M For Murder, wowing audiences for three straight nights. Zachary Espiritu '17 proudly displays his award-winning Math Battle App on his iPhone, which earned him recognition at the annual Congressional District App Challenge. Students and faculty participated in the annual student-faculty tchoukball game. 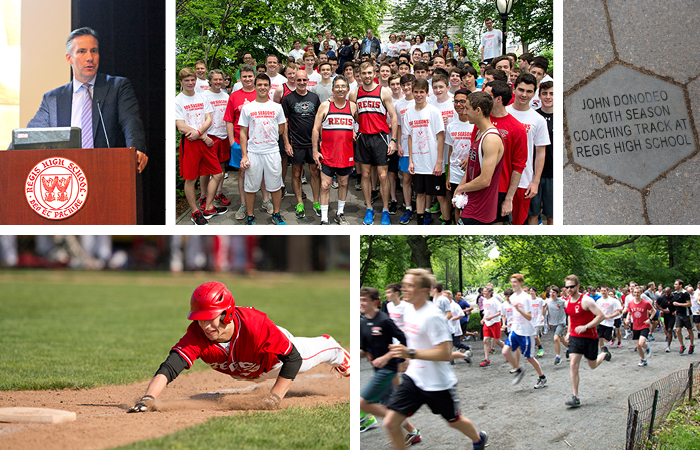 This year's President's Dinner, held on May 5, featured a presentation by Jim Sciutto '88, Chief National Security Correspondent for CNN and host of "The Brief" for CNN Digital. On Sunday, May 22nd, members of the Regis community came together to celebrate Coach Donodeo's remarkable milestone of 100 seasons of coaching at Regis. Beginning in the fall of 1982 and continuing uninterrupted since, Donodeo has coached 3 seasons—Cross Country, Indoor Track, and Outdoor Track—each year. Joseph Hirshorn ’17 dives back to 3rd base after rounding the bag during a Varsity Baseball game against Brunswick. 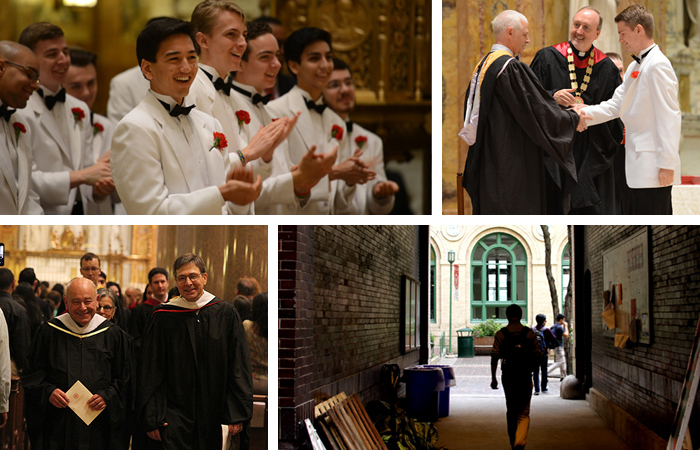 In the presence of proud family, friends, and faculty, the class of 2016 became the ninety-ninth graduating class of Regis High School on a sunny Saturday, June 4. Owen MacDonnell '16 received his diploma from his dad, long-serving faculty member Mr. Brendan MacDonnell. Mr. Conti and Mr. Vode led the faculty procession in their final graduation ceremony. Navigating through various items stored along the way, students entered Regis through the Tunnel one final time on the morning of June 8, 2016. 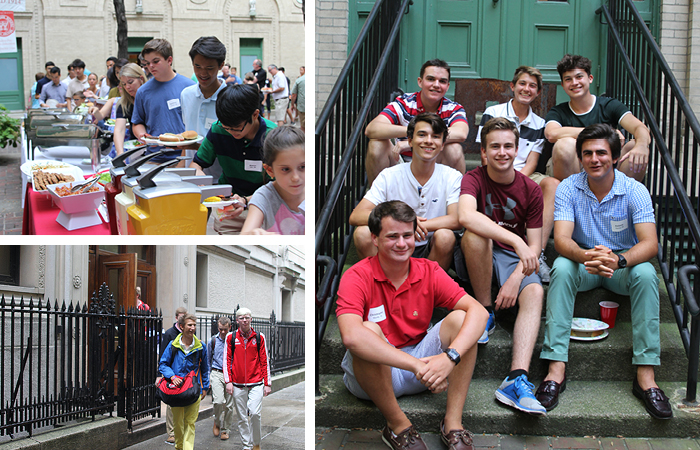 Just before the start to the new school year, alumni, students, families, and friends gathered in the Reqis Quadrangle for two family barbecues sponsored by the Regis Office of Development. Students now conclude their school week by exiting the 85th Street doors, but not before "scanning out" at ID readers in the 85th Street foyer. 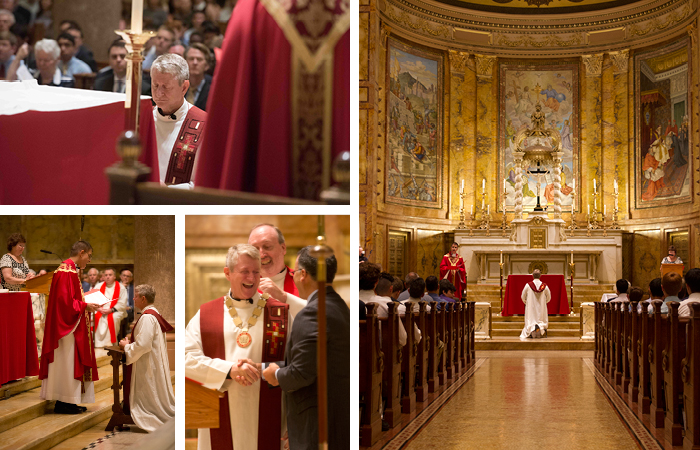 Rev. Daniel K. Lahart, SJ kneels at the altar of Saint Ignatius Loyola Church while the Very Rev. John J. Cecero, SJ, Provincial of the USA Northeast Province of the Society of Jesus, missions him as the 23rd President of Regis High School. With the assistance of Fr. Jim Croghan, SJ, Mr. Peter Labbat '83, Chair of the Regis Board of Trustees, presents Fr. Lahart with the Presidential Chain of Office. 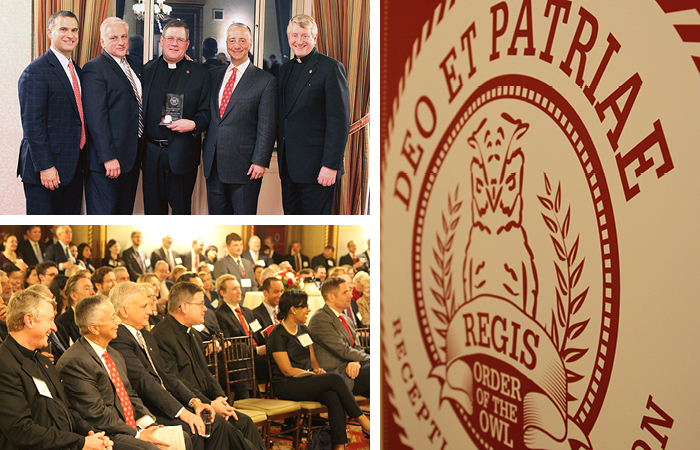 On October 27, Rev. Philip G. Judge, SJ '80, former President of Regis, was presented with the 2016 Deo et Patriae Award. The award is presented annually to a person who has served Regis and their community in a distinguished capacity during the course of his or her life. The presentation took place at the Deo et Patriae reception, an annual celebration honoring Annual Fund donors at the Order of the Owl giving levels. Above, top: Peter Labbat '83, Anthony Domino, Jr. '80, Rev. Philip G. Judge, SJ '80, Anthony DiNovi, Jr. '80, and Rev. Daniel K. Lahart, SJ 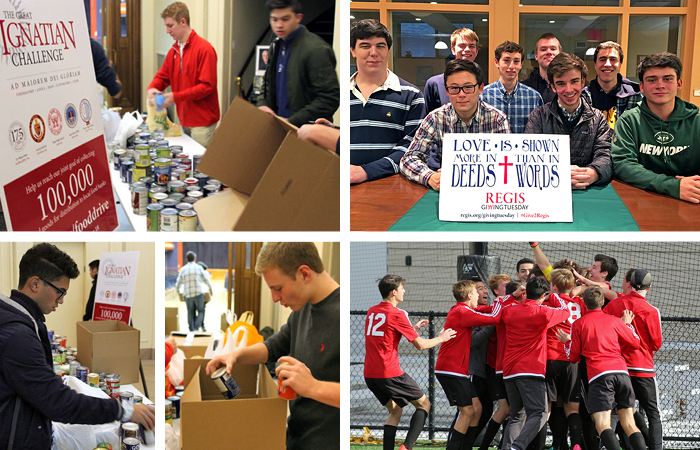 Regis High School donated over 21,000 canned goods to The New York Common Pantry and Jan Hus Urban Outreach Program as their contribution to the Great Ignatian Challenge, a friendly, but spirited Thanksgiving food drive competition five Metro-area Jesuit high schools. The generosity of the Regis community was on display Tuesday as alumni, families, faculty, staff, students, and friends participated in Regis's second annual Giving Tuesday campaign, a one-day fundraising event. This year's event was themed on the Saint Ignatius quote, "Love is shown more in deeds than in words." In a thrilling overtime win, the Regis Varsity soccer team defeated Holy Cross to advance to the CHSAA Class AA championship. With less than a minute left in sudden death overtime, Antin Demko '18 scored to give Regis a 1-0 victory in the semifinal game. After overtime and penalty kicks, the team would eventually lose a heartbreaking title game to nationally-ranked Fordham Preparatory. 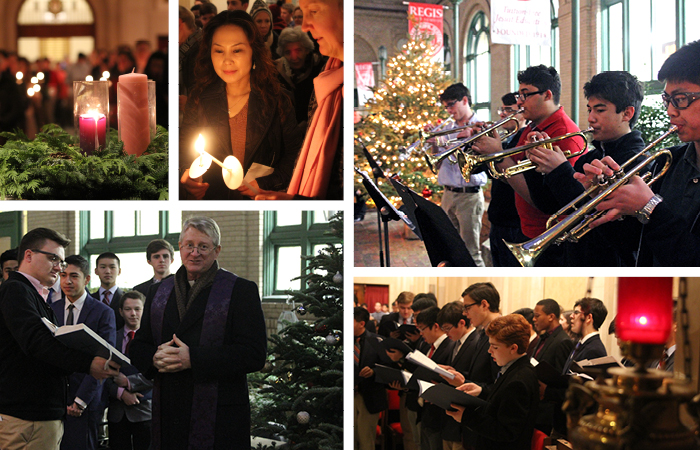 On December 9, the Regis community joined together in celebration and gave thanks for the blessings received this past year at the annual Christmas Tree Lighting. All who were gathered in the chapel held a candle, and a flame from the Advent wreath was passed on to light the way as the congregation made its way to the Regis Quadrangle. The festive atmosphere continued with a Christmas celebration in the Regis Auditorium, with thanks to the Parents Club for their considerable generosity in providing hot chocolate and seasonal treats for all to enjoy.