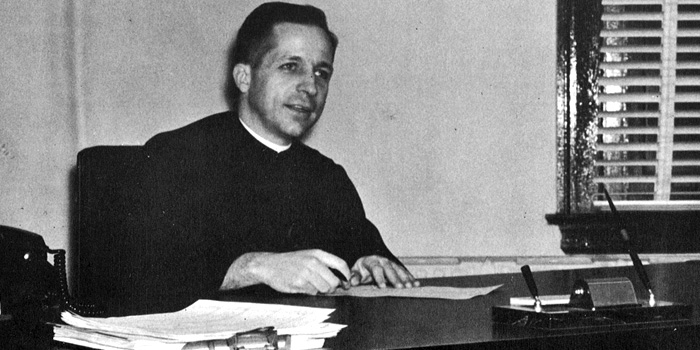 Father Neville was born in the Bronx, NY on October 31, 1929 to Brigid (nèe Conway) and John Neville from County Tyrone, Northern Ireland. He was baptized in St. Jerome's Church in the Bronx on November 17, 1929 and attended St. Jerome's elementary school and then the Fordham Preparatory School. He entered the Society of Jesus after graduation from high school on September 7, 1947 at the Jesuit novitiate of St. Andrew-on-Hudson in Poughkeepsie, N.Y. and pronounced his first vows on September 8, 1949.

After completing the juniorate at St. Andrew-on-Hudson in 1951 Fr. Neville went to the Philippines to study philosophy at Berchmans College in Cebu City and then began teaching at the Ateneo de Zamboanga in 1954. He returned to the United States in 1957 to study theology at Woodstock College in Woodstock, Maryland. He was ordained a priest on June 18, 1960 at the Fordham University Church in the Bronx, served his tertianship at the Shrine of the North American Martyrs at Auriesville in 1961, and pronounced his final vows on September 8, 1978.

Father Neville began the work that was to occupy him for the rest of his life when he moved to the Jesuit retreat house of Christ the King in Syracuse, NY, where he ran retreats and was engaged in spiritual direction from 1979 to 1981. In 1981 he continued this work at the Loyola House of Retreats in Morristown, NJ and then in 1987 at Mount Manresa Retreat House in Staten Island, NY. Fr. Neville returned to Christ the King Retreat House in Syracuse in 1992 where he worked until 1994 when the Diocese of Syracuse assumed responsibility for the house. In 1994 Father Neville moved to the Jesuit Community at Le Moyne College, likewise in Syracuse, where he gave retreats and spiritual direction to a large number of clergy in New York and Pennsylvania. He also celebrated Mass in a number of parishes in the Diocese, most recently at Immaculate Conception Church in Fayetteville.