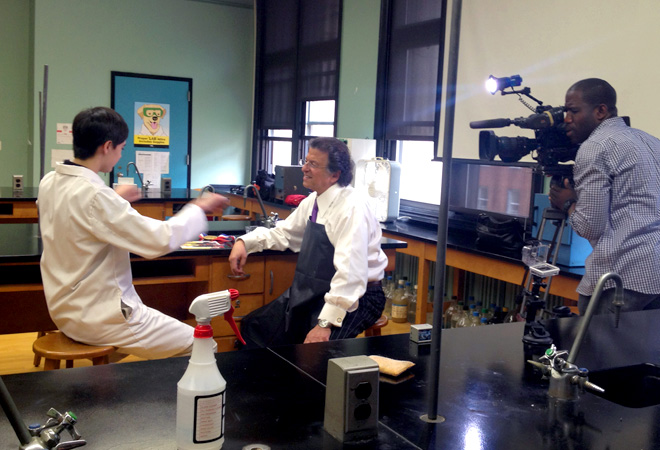 Last week, one of New York's most popular weatherman, Mr. G,  stopped by Regis High School to conduct an interview and chemistry experiment with Chris Hillenbrand '15. The interview was the latest installment of a new PIX11 news segment called "It's a G Thing!" where Mr. G searches for interesting and inspiring people who make New York unique. The interview aired during the 5 p.m. and 10 p.m. news broadcasts on Friday, June 14th.

The teaser from the PIX11 website reads: "15-year-old Chris Hillenbrand's love for chemistry is infectious. A sophomore at Regis High School, Chris is simply fascinated by science. Every now and then you come across a kid like this. When asked what he loves about science, Chris says, "It's almost like magic." It's not typical teenager talk. That is unless you're a chemistry whiz kid."

An ardent supporter of education, Mr G in no stranger to the classroom. Mr. G began his career as a school teacher at Albert Einstein Intermediate School in The Bronx. During his teaching days, he created the first computerized weather program for use by children and teachers in the New York City school system.