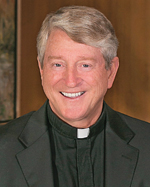 While you will be reading this as summer draws to a close, I am writing this mid-July in northern Wisconsin as I enjoy a little time off before beginning my work at Regis on August 15. While I haven’t arrived at Regis yet, I know what a special place it is both from its reputation and from my experiences on 84th Street first during my interview process and then during two weeklong visits this last school year. I look forward to beginning my tenure as president, and I am confident that Regis will continue to fulfill the mission envisioned by Fr. Hearn and our Foundress more than a century ago.

I am humbled to follow the distinguished tenure of Fr. Judge, SJ '80 who as an alumnus and faculty member knew and loved Regis with his whole being. He left Regis in sound condition both physically and financially through his dedicated efforts of the Strong to Endure campaign and his daily care of students and faculty, parents and alumni. I am grateful for his encouragement to me as I prepare to continue to build on his legacy and that of the 20 men who served before him.

I know I express the gratitude of our entire community to Fr. Croghan, SJ for his selfless generosity in serving as interim president this past year. This was not a position that Fr. Croghan hoped for or sought, but he enthusiastically served and guided Regis when asked to do so. His efforts yielded significant fruit as the Annual Fund set a new record, helping to close the significant gap between our operating costs and our endowment income. We are all fortunate that he will remain at Regis in his prior role as Director of Ignatian Identity Programs.

Allow me to take this opportunity to provide you with some of my background. I grew up in Winnetka, Illinois on the north shore of Chicago, the third of four children. I attended our parish grade school, and then followed the family tradition of attending Loyola Academy and was there introduced to Jesuit education. I continued with the Jesuits as I matriculated at Georgetown University and majored in finance in the business school. It was the influence of a Regis alumnus, Fr. Tim Healy, SJ '40 which started me thinking about joining the Jesuits, which I did immediately following graduation in 1983.

My novitiate was at Wernersville, Pennsylvania, followed by philosophy studies at St. Louis University. I taught mathematics for three years as a scholastic at Scranton Preparatory School, and then began my theology studies at Weston School of Theology in Cambridge, Massachusetts. Ordained a deacon in 1993, I studied theology for an additional year at Boston College, and was ordained a priest in 1994 in Baltimore.

Following ordination, my first assignment was as an MBA student at Stanford University. I graduated in 1996 and began five years as CFO at Gonzaga College High School in Washington, D.C. I simultaneously served for four years as the Provincial’s Assistant for Secondary Education in the Maryland Province.

I began my tenure as president of Strake Jesuit College Preparatory in Houston in 2001 and proudly served in that role until this past May.

As much as Texas took a little adjustment for this Chicago guy, I assume New York will require that too. I will have to learn the subway and the Park, the suburbs and the boroughs, the differences between the LIRR and Metro North, whether true New York pizza is thick or thin crust. I look forward to learning as much about the City and its environs as I can, but I am most excited about meeting and making new friends in the Regis community.

I am blessed to have many friends in New York already, and I know from my brief visits this past year that there is a warm, welcoming community that awaits me at Regis. It is an exciting time at Regis. As we move into our second century, we build on a storied history of generosity. While so many incidentals have changed over time, who we are, the heart of our mission, and the impact Regis has on young men’s lives remain constants. We do this in an explicitly Catholic environment taking the opportunity to give thanks to our God who has blessed us all so abundantly.

I give thanks to God and to you for this opportunity to come to know, love and serve Regis and our community. I look forward to meeting you, learning about your Regis stories, and together strengthening Regis for the future. As Fr. Croghan often said this past year, the best days of Regis are still ahead of us. May the Lord bless each of us, and I thank you for your support of Regis High School. Be assured of my prayers for you and your families.