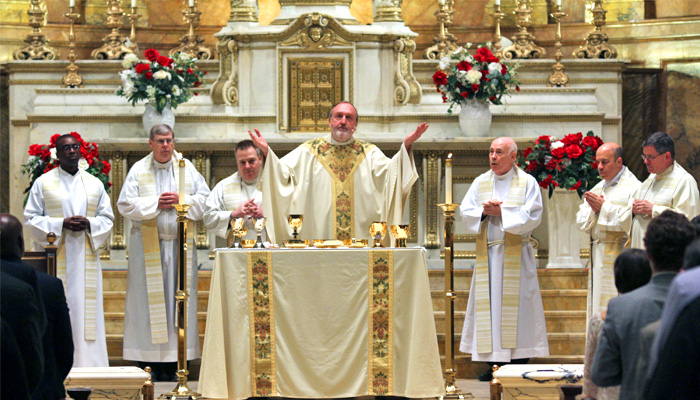 On Thursday, June 2, the class of 2016 and their families gathered at the Church of Saint Ignatius Loyola for Regis High School's 2016 Baccalaureate Mass. Below is a reprint of Fr. Jim Croghan, S.J.'s homily delivered at the Mass.


I'd like to suggest that based on the evidence of the last four years you have taken to heart Jesus's advice about not worrying about what you are to wear, and what you are to eat and drink. Given our fairly undemanding dress code you seem to have that first one nailed. And given the nearly inexhaustible supply of quesadillas and panini in the cafeteria—with the inexhaustibly long line that you patiently endured for the better part of three years until you had more access to the finer dining establishments in the neighborhood—Mimi’s, Subway, Burger King, the ever reliable Neophytos and the occasional Shake Shack, I'd say that you had the second piece, the eating and drinking, down pat as well. But what about that last part: "Seek first the kingdom of God and God's righteousness, and all these things will be given you besides."

I'll come back to that in a moment. As I noted in my message to you in the yearbook, being up here at the altar has given me a vantage point from which to watch you move from one section of the church to another over the course of 15-16 school-wide masses in the last four years—it should have been more but remember that two Thanksgiving masses were rained out and Fr. Andreassi had to wait three years to give the homily he had prepared when you were sophomores.

You didn't travel very far as you moved from front to back, side to side and back to front again over these years, but I'd like to suggest it was journey nonetheless, a journey measured not by distance and mileage, but a journey measured by physical, emotional, intellectual, psychological and spiritual growth. The kind of growth that marks any journey truly worthy of being named as such since it entails meeting challenges, overcoming obstacles, facing down self-doubt, rising again after failure. And doing all this not just in your academic work in and out of the classroom but on the field, the court, the track; at tournaments, meets and games; in teams, clubs, activities here and elsewhere. 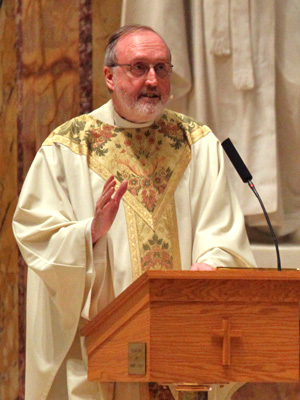 It is a journey which Fr. Judge first invited you to undertake in your freshman year during your first Regis Mass of the Holy Spirit when he asked you to re-imagine your commute to school that September morning and to see it as not just a trip, whether by train, bus, subway, ferry, or even on foot, but a journey.

Fr. Judge asked you to re-imagine the trip that got you to school, by renaming what you did as a journey rather than a commute.  He said "with one deft change I've turned you from commuters into heroes. And indeed, as for any hero coming of age or engaged in any other transformational event, journeys overcome obstacles and pass by milestones and acquire lessons and treasures on the way to obtaining a goal. This may not be how you normally understand the MTA, but believe me when I say that the romance of the journey through the subway system lies merely in how you choose to see it and name it."

I would add that the romance of the journey through Regis, through this church, through your years of college just ahead lies as well in how you choose to see it and name it. You are on the verge of obtaining one very special goal which we will celebrate on Saturday when you receive your diplomas, but this achievement, as good as it is in itself, really helps make possible so much more that lies beyond near and far horizons.

Our world needs heroes. Our world needs you and all of us to embark upon heroic journeys, journeys of grace and transformation, of forgiveness and reconciliation, journeys of faith and commitment. I believe that this is what it means to "Seek first the kingdom of God and God's righteousness." To seek God's kingdom and God's righteousness means to labor with God on the side of the marginalized, the excluded, the rejected, the abandoned, the poor, victims of discrimination and victims of war and violence. Men, women and children whom Pope Francis consistently and constantly calls to our attention, our mercy, our love. To seek God's kingdom and God's righteousness means to "live in a manner worthy of the call you have received, with all humility and gentleness, with patience, bearing with one another through love, striving to preserve the unity of the spirit through the bond of peace" as St. Paul writes in our first reading from his beautiful letter to the Ephesians.

To seek God's kingdom and God's righteousness is not a burden imposed on you or any of us. Rather I invite you to recognize that you already do this and do it well. You've tutored kids in schools, worked in food pantries and soup kitchens, transported hospital patients and visited nursing homes. You made a record number of peanut butter and jelly sandwiches and helped retired nuns straighten out their email accounts. You've even sorted through mounds of socks, t-shirts and underwear and brought the same to Riker's to give as gifts to young men in jail there. Your many, many hours of quiet service, usually unglamorous and often unnoticed, are evidence of your commitment to seek God's kingdom and God’s righteousness. You have served God's people unselfishly and well.

The people you serve are God's people, the kingdom you build is God's kingdom. The world you thus change by one act of love at a time is God's world.

Indeed, then, "Seek first the kingdom of God and God's righteousness, and all these things will be given you besides." Things you can't even begin to imagine tonight, but which are there waiting for you. Amen.