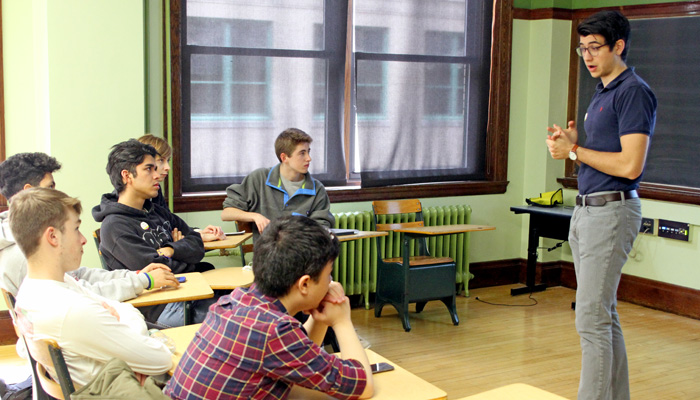 When Giancarlo Milea ’11 was finishing his studies at Regis in 2011, there was one senior year course offering that left quite an impression on him, despite not enrolling in the course himself. Fr. Andreassi, Dr. Nofi, and Dr. Ross (the Assistant Principal at the time) together offered a history-meets-psychology elective focused on weekly analysis of AMC's hit drama Mad Men. That unique approach to teaching resurfaced in the spring of 2015 as Milea, who was finishing his undergraduate degree at Fordham University, began preparing for his upcoming year of service as an Alumnus Mentor at Regis.

"I liked the idea of using the television medium as an innovative way to wrestle academic material," said Milea. "I remember watching Unbreakable Kimmy Schmidt in my senior year of college and not just enjoying the show's humor, but also how much of the show referenced sociopolitical issues."

The show, Milea says, made him a more conscious New Yorker, and made him a bit more curious about what goes on in New York. "A more academic analysis of the show and its plot devices had me drawing comparisons to several European thinkers—Baudelaire, Gramsci, Calvino—that I had studied in my undergraduate work, so I knew there was an academic and literary foundation to focusing a course on analyzing the show." 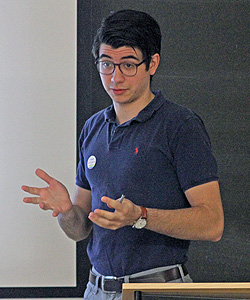 For the third trimester of the 2015-2016 academic year, Milea was excited to offer a senior elective titled "The Unbreakable New York". The course engaged students in discussion on the New York in which they live, and fostered a more acute awareness of their citizenship. Coherent, academic dialogue on sociopolitical issues were used to help students cultivate a sound political ideology as New Yorkers.

"I had 9 seniors enrolled in the class, and several faculty members stopped in to engage the students in discussion," said Milea. "The students remained engaged throughout the trimester, especially because each student had in some way experienced, witnessed, or participated in the issues we tackled. Discussions were vigorous, but never polemical, and they reflected the students' different backgrounds."

In addition to enjoying his service as a mentor at Regis, Milea used his opportunity in the classroom to better understand how students approach academic topics.

"There seems to be a disconnect between the 'work' that students do in school and the recreational things that they might do in their free time," reflected Milea. "I think it's problematic to only turn a critical eye towards something just because it’s a mainstay on a high school curriculum. Part of the goal was to remind students that they should be analyzing issues beyond those presented within the classroom, and that includes taking time to examine a favorite series on Netflix."

For Milea, there is no question that courses like his, which wrestle with present-day culture, provide unique learning opportunities for Regians. "Students realize that the intellectualism they've cultivated at Regis has applications where they don't expect," remarked Milea. "I think it would be detrimental to suggest, accidentally or intentionally, that all culture that merits critical examination is behind us. That notion dismisses TV shows, music, and a myriad of other art forms that students cherish, and it feeds into the problematic disconnect I mentioned before."

Additionally, Milea believes the innovative senior electives offered at Regis help manifest the Regis "Grad at Grad" values. "The last chapter of a Regis education has to inspire curiosity about the outside world, and a belief that the student can change it for the better," added Milea. "The academic third trimester cannot allow Regians to believe that the most difficult work is behind them."