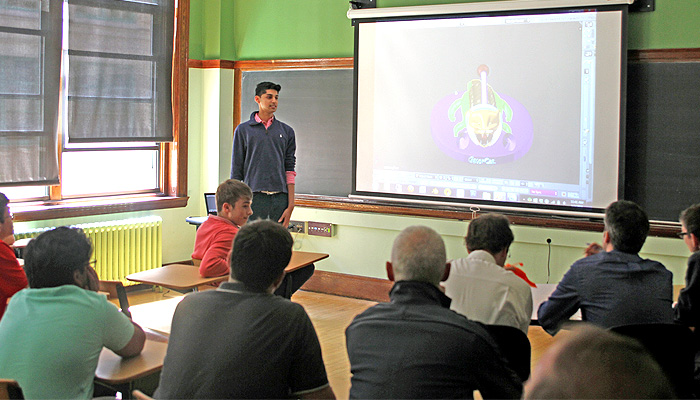 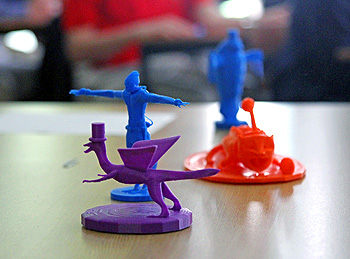 In a school with academic courses and projects steeped in tradition, there is one course at Regis on the technological "cutting edge" of education: Intro to 3D Modeling & Animation.

The class, one of the latest additions to the menu of electives for seniors, gives Regians a hands-on opportunity to explore the rapidly growing field of 3D production and design. The course is taught by Mr. Joshua Travatello and joins technical design with creative expression.

(Pictured: a few of the 3D prints for characters designed by this year's seniors on display)

"Throughout the course, students learn what makes up the 3D production pipeline, which is the process that is used for creating animated movies, advertisements, TV shows, video games, and much more," says Travatello. "The goal is to allow students to understand and appreciate the technical elements of 3D production."

Travatello structures the course in a unique way: have the students interact as if they were interns for a fictional 3D production company called TravTech Studios. Their objective is to prepare—and eventually pitch—their own, original character design and backstory to a group of "executives."  In order to present their creation, students first study pre-production concept design, 3D modeling, digital painting, rigging, and animation—not your typical high school lesson plan. 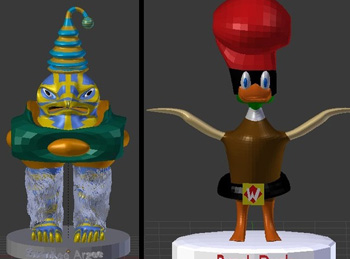 "Students act as a 'modeler' creating the three dimensional digital rendition of their character in the software," said Travatello. "Next, they learn how to digitally paint their designs. We then study the role of 'rigger’, the person that adds joints and skeleton to the design.  Finally students learn the role of 'animator,' the person who moves these bones so as to create fluid movement for the character."

As the final portion of their project, students are able to gain first-hand experience using Regis' new Makerbot 3D printer to print out their characters in real life.

A panel of faculty and staff listen to the presentations in a "Shark Tank"-like format. Faculty from various disciplines provide questions and comments, and the students respond with typical inventiveness.

Proving to be a popular class, students seem to enjoy the ability to step out of their comfort zone and try something new.  "Taking 3D Modeling allowed me to harmonize my creativity and computer skills as I brought ideas to life," said Brandon Baldovin '15, who enrolled in the class last year.

While the senior elective is only one trimester long, it nonetheless exposes students to a world of artistic design useful in many industries including architecture, science, engineering, 3D production, and graphic design.

"I feel it's important for all students to study artistic expression, but it’s especially important at Regis," added Travatello. "Whether digital art or traditional studio art, creativity fosters your imagination, and it's something you hold onto, something that is transferrable to any field. Whether a student goes on to become a lawyer, a doctor, or an artist, it's their creativity that is going to inspire them to find the next great cure, or write the next great American novel."

See the Designs:
All 3D designs from this course and other student 3D projects are posted at regis.org/3D.