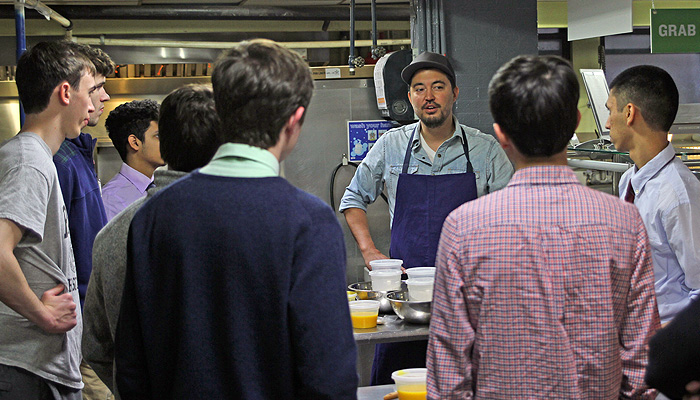 Above: Nick Anderer '95 begins a culinary lesson with Regis seniors in the school cafeteria. 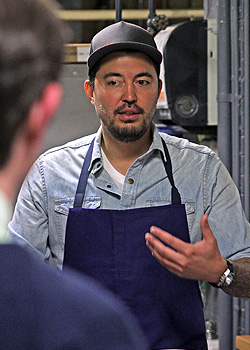 Earlier this semester, students enrolled in the Culinary Arts and Nutrition senior elective welcomed Chef Nick Anderer '95 to the kitchen to share his advice and expertise with the class.

Chef Anderer talked to the seniors about the many experiences that have shaped his culinary passion—ranging from his mom's cooking to a stint in Rome during his junior year of college. Not wasting the opportunity to give Regians a hands-on experience in the Regis cafeteria, he also guided the seniors through the process of making raviolis from scratch: mixing the dough, working it in the pasta machine, filling them with a ricotta-herb mixture (which the class also made), and cooking in a brown butter and sage sauce.

"It was inspiring for our students to meet an alumnus who has taken his love of art and family, and used that to fuel his culinary passion," said Mary Henninger, who teaches the popular senior elective. "It was a connection for our students who may be questioning how they themselves can incorporate their interests and skills into future choices."

For the students, the short lesson resonated beyond the kitchen. "He reminded us to pay attention to the little things, both while cooking and also in life," said Carlos Ventura '16. "The things that may seem insignificant can actually ruin a dish. Likewise, taking care of and appreciating all the small details in your everyday life may prove to be beneficial in a number of ways."

After graduating from Columbia University, Anderer began his career working for Larry Forgione at An American Place, Rose Hill, and Manhattan Prime. He then served as both a pastry cook and a line cook at Mario Batali's Babbo, which fueled his passion for Italian cuisine. Anderer then spent time in Italy, cooking in kitchens throughout Rome and Milan. A year later he returned to New York and landed at Gramercy Tavern where he cooked for six years and reinvigorated the restaurant's pasta program. He opened Maialino as the Executive Chef in 2009, and became a partner in 2012. He also serves as the Executive Chef and Partner at Marta, a new restaurant at The Redbury New York hotel.

Anderer and his work have been written about numerous times, and he recently served as a guest judge on an episode of The Food Network's Chopped (episode titled, "The Bold and the Baconful"). He was also the subject of a "What Made Me" video short produced by The New York Times (embedded below).

Above: Nick Anderer '95 walks students through the process of making ravioli.