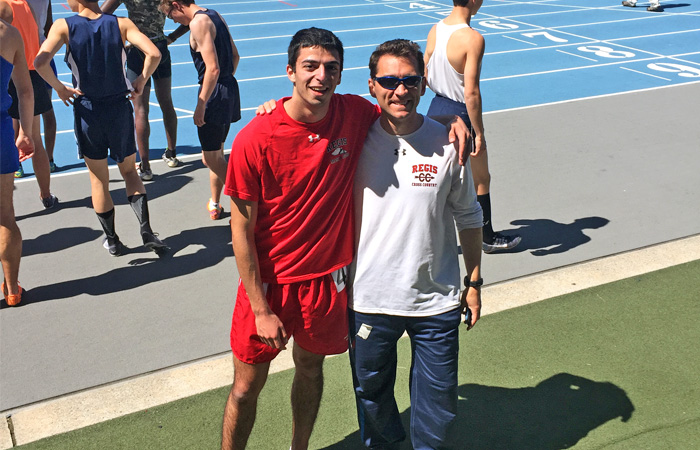 Above: Adriano Atallah '17 with Coach Febles after a grueling 2-day decathlon competition. 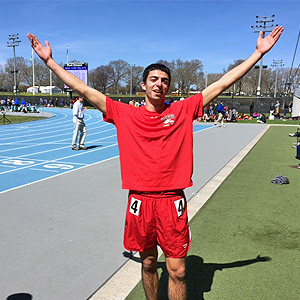 Adriano Atallah ’17, fresh off a grueling 1500m run in the mid-April heat, could barely catch his breath. Ten events in two days—making history along the way—will do that to you.

At the New York Relays on April 15th and 16th at Icahn Stadium, the 6’ 3” standout became the first athlete in 103 years of Regis track and field to complete a decathlon. This combined-event competition encompasses ten performances in just two days and, in this case, less than 24 hours.

(Pictured: a relieved Adriano Atallah '17 smiles with content following a successful completion of the decathlon.)

The decathlon is not offered regularly to high school athletes. In fact, this year’s New York Relays was the only opportunity to compete in a decathlon this year.

“Last year, I saw the decathletes finishing the 1500, and after a brief conversation with Coach Febles about what events made up the decathlon I decided that I wanted to challenge myself and compete in it next time,” said Atallah.

Fans of Regis Track who were present on Day 2 were able to witness something never seen on camera: a Regian clearing the bar in the pole vault (event #8 on the decathlon’s itinerary). Since Regis has no pole vault facility or equipment, Atallah turned to the track program at Fordham Preparatory for guidance in the weeks leading up to the event. Fordham generously lent their pole vault guru to Regis, Mr. Pierre Chavez, who happens to be Regis class of 1997. 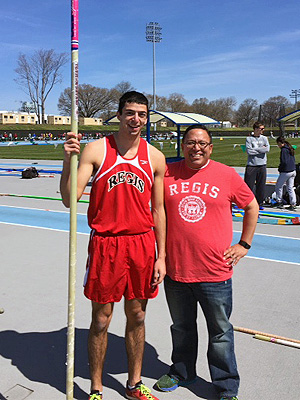 “Mr. Chavez was very nice, but also businesslike as we only had a few sessions together and I had very limited experience with the pole vault,” reflected Atallah. “I can’t thank him enough for putting up with all of my beginner mistakes.”

Thanks to Jesuit goodwill and Chavez’s expertise, Atallah was able to clear 8 feet and grab 229 points—enough to keep pace with the other eight competitors. It is now also a Regis record.

(Pictured: Adriano Atallah '17 with Pierre Chavez '97 during Day 2 of the decathlon competition.)

The New Rochelle native is a fine athlete, but his success in the decathlon was nonetheless surprising. In what was his first discus competition, for example, Atallah earned the highest mark in the discus at just under 100’, making him the top thrower on the team. He also threw over 100’ in the javelin, a sacred mark for which some athletes pine all year long.

“I went into the event with no expectations,” said Atallah, reflecting on the weekend. “My goal was only to finish it and have fun in the process.”

All told, Adriano scored 4,681 total points and, in a unique twist, tied with another athlete for third place: a rare occurrence after so many events.

“It was a bit of a shock, but by the middle of the second day I knew that I was in the running for a medal, and so I gave it everything I had,” said Atallah.

While Atallah shared the decathlon’s bronze medal, no one shares the glory of his new Regis Track record.

“It's definitely crazy to think that my name will go down as the first person in school history to complete a decathlon,” said Atallah. “All of the coaches were so supportive. They let me do a lot of training on my own to prepare and I can’t thank them enough. The student-athletes I competed against were great as well, and they made the whole experience that much better.”

As he wilted in the shade, after hugging the other finishers in athletic camaraderie, the Regis coaching staff offered Atallah a few days off from practice to rest. But on the following Tuesday, Atallah was back clearing hurdles, working on his form, and trying to pick up a few tenths—and a few points—for the next time. 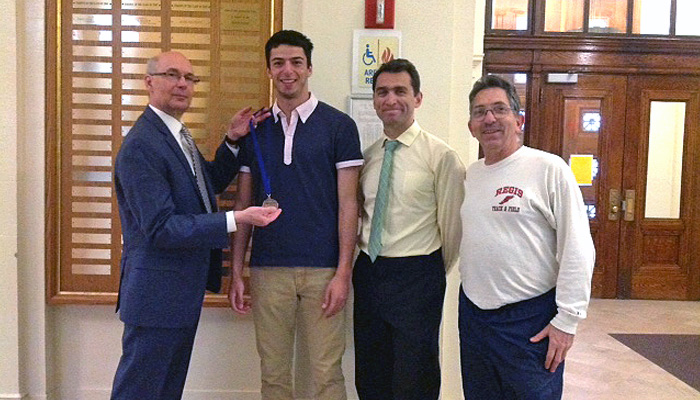 Many thanks to Mr. Chris Febles for text and photograph contributions to this article.