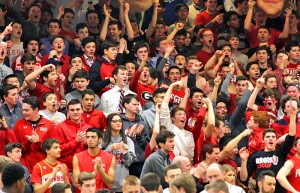 On Sunday, February 21, the Regis Freshman and Junior Varsity basketball teams will both face-off against La Salle in their respective league championship games. Both games will take place at Fordham Preparatory (Bronx, NY). The Freshman championship game is scheduled for a 1:00 p.m. tip-off, and the Junior Varsity game will follow at approximately 2:45 p.m.

The freshmen enter the championship game with a 15-5 season record. They staged an impressive 76-41 victory over Moore Catholic in a semi-final matchup on February 18. The Regis and La Salle freshmen split wins during their regular season match-ups, with both games featuring slim margins of victory on the opponent’s court. While Regis lost to La Salle by 5 points at home on January 9 (58-53), they edged out the Cardinals on La Salle’s home court on February 5 (60-59).

The Junior Varsity squad enters their championship game with a 13-5 season record. They reached the finals after a 50-39 semi-final win over Salesian on February 18. While the Regis JV team earned victories in both regular season meetings with La Salle, both games were tight. A 47-43 victory on January 9 was followed by an even closer 47-46 victory on February 5.

Regardless of Saturday’s outcome, both teams demonstrated tremendous effort and talent over the course of two very successful seasons.