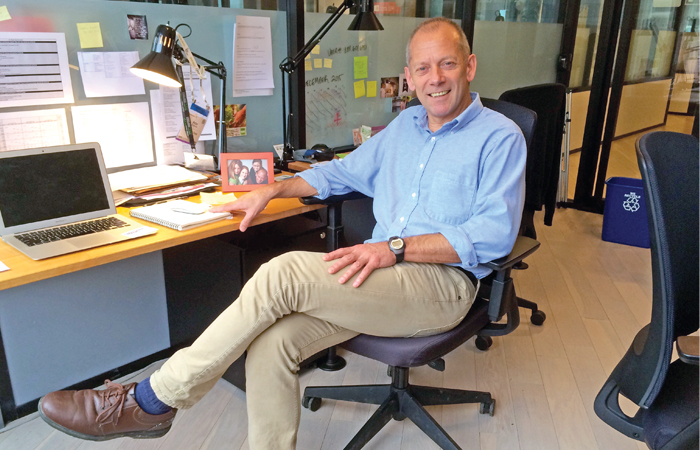 by Christopher Connell '67
Most people never have anything close to a Road to Damascus moment or, if they do, manage soon to put it out of mind. Peter D. O'Driscoll '80 had a flurry of them as a student at Regis and Harvard and built a life and career around their lasting impact.

O'Driscoll, 53, is executive director of the Equitable Food Initiative (EFI), an unusual partnership spawned by Oxfam America that has brought farmworkers together with growers, retail giants Costco Wholesale, Whole Foods and others to improve working conditions, sanitation and the safety of the fruit and vegetables that wind up on tables across North America. Retailers with a conscience underwrite the training by paying a premium for produce harvested by better paid workers who understand how to meet higher standards. "It is very, very unusual to bring the growers and farmworkers together like this," said Dan Glickman, the former U.S. secretary of agriculture and a former Oxfam board member who accompanied O'Driscoll on a trip to California farms and met with Costco executives. O'Driscoll displayed an "uncommon" knack for bringing age-old antagonists together, Glickman said.

O'Driscoll is an organization builder, a networker par excellence and a longtime participant in Catholic social justice circles who taught in Nativity schools after college and spent seven years working with the Jesuit Refugee Service in camps in El Salvador, still in the throes of civil war. When he returned to New York with his Canadian wife, Christine Reesor, also a volunteer in the refugee camps, "we had $1,000 between us, two guitars and a flute." They both went to graduate school. Reesor became a nurse practitioner working with low income immigrants and O'Driscoll, with a master’s degree from Columbia's School of International and Public Affairs, began running programs and projects addressing hunger and problems in the food system on a global scale.

The spark was lit at Regis, where O'Driscoll wound up two years after his British family moved to the States with five of their six children for his father's job as a cargo manager for Pan Am. He has never lost his British accent. His mother Agnes, a Latin teacher back home, scouted schools and "just fell in love with Regis." He was still a freshman when his mother, weakened by a bout with rheumatic fever years earlier, died during a valve replacement operation back in London.

"Regis fell from heaven. I feel like it saved me when my mother died. It gave me so much structure, and there were just so many good people reaching out to me. A bunch of teachers were checking in on me," recalled O'Driscoll. "I did a lot of everything; played soccer, did theater, the Hearn. I loved the school. I bought into the hard work, bought into the diverse experiences, and then really, really, really bought into this notion of service." Once he’d thought about medicine for a career. “It took me a few years to realize I was useless at science and not really interested in it. Later I thought seriously about the priesthood. I was drawn to the Jesuits. Phil Judge, S.J. and I were classmates. We talked a lot about vocation and the Jesuits as he was making his decision." (Fr. Judge, president of Regis from 2005 to 2015, is now superior of the Jesuit community at America House, which publishes America magazine. Their class—1980—soon established itself among the most generous in the school’s history.) Although O'Driscoll insists he wasn’t one of "the real brains," he was voted valedictorian, won the 1980 Heitefuss Award, and was among six admitted to Harvard. (He credits guidance counselor and former history teacher Jim Ferguson, who "was just amazing. He built the relationships and got places like Harvard interested in kids from Regis.")

O’Driscoll's most formative experiences actually occurred outside the corridors of Regis or the classrooms at Harvard. In June 1979 he journeyed to Guyana eight months after the Jonestown massacre to visit an uncle, the late Rev. Terry Petry, S.J., an English Jesuit who spent four decades working in jungle villages there. It was his first exposure to true rural poverty "...and quite overwhelming to me at 17."

Back at Regis, he was in the first cohort of seniors who volunteered as tutors in a program launched by longtime guidance counselor and basketball coach Michael Mincieli, Ph.D. '60. He tutored in a parochial school in the South Bronx. "It drew me into justice and equity issues. In New York you can ride the subway for 25 minutes and go from the Upper East Side to burning buildings in the South Bronx. You can either look at it and turn away or get drawn in. I got drawn in," he said. 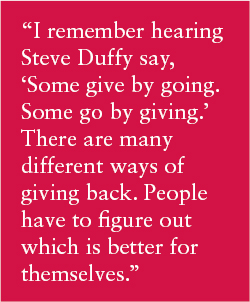 Mincieli, who retired in 2005, was a founder of the original Nativity Mission School and for decades directed a summer leadership camp in Lake Placid, New York, for inner city kids from Nativity, where O'Driscoll worked during college summers. "Though I was there as a counselor, I was as attentive as the kids during Mike’s Sunday morning motivational talks, during which he would challenge the campers to dare to take risks, to be different, to make sacrifices."

Mincieli, from his home in Henderson, Nevada, said his protégé "was always very interested not only in an individual person, but also in the larger picture and how this program or that program could ultimately serve a lot of people. He was so inventive. He’d say, ‘Gee, I think I could put this together with that and it could have this kind of an effect.’ A lot of the stuff that he did at Regis, at Harvard and in El Salvador has followed him throughout his life."

O'Driscoll holed up in the library at Harvard, graduating summa cum laude in French and English history and literature and winning a prize for a senior thesis on Jean-Paul Sartre's Le Sursis. It seemed his ticket was punched for graduate school and an academic career, but that never tempted him. "School was like a game. I knew the rules and could play it reasonably well, but I had felt a very clear call to service going back to age 15 or 16, and the question was: Are you going to heed the call or not?" he said. He had ruled out the priesthood, "but I had Steve Duffy’s theology and Bukidnon Bookie [football pools to raise money for missions] ringing in my ears."

"I decided to do what I called an experiment in truth, kind of a Dorothy Day concept. I went and worked at Nativity on the Lower East side for $200 a month and lived in a volunteer community, a mix of lay people, Jesuit volunteers and Jesuits for a year. Long story short, I loved the work, loved the mission, but didn't feel I wanted to work in a community that way," he said. He spent two years working with the Sisters of the Good Shepherd on dropout prevention at a public junior high in Brooklyn, then set off for El Salvador, helping resettle hundreds of refugees and training "barefoot teachers" in Chalatenango.

"I had this incredible experience. To me the holy grail of understanding the world is being able to have very specific and concrete experience at the most intimate, local, interpersonal level, and being able to relate those to local, regional, national and international phenomena, to try to see the whole system," he explained. "NAFTA passed in 1994 and changed the entire structure of the corn economy on the Central American isthmus, because all of a sudden subsidized U.S. corn is getting dumped on Mexico, which means the price of corn goes down the toilet, which means you’re feeling this ripple effect even if you're a subsistence farmer in El Salvador."

O'Driscoll headed to graduate school to better grasp the globalization phenomenon and to understand “the prevailing logic” of institutions such as the World Bank "so I could figure out how this orthodoxy affected poor people." He worked for Nativity at night, raising funds and helping steer Nativity graduates to Catholic high schools and on to college. O'Driscoll was hired in 1997 by Ashoka, a non-profit that supports social entrepreneurs and "changemakers" around the world, as its Latin America director. He managed a staff of 25 and a budget of nearly $3 million and worked with hundreds of social entrepreneurs across Latin America. "It was the first real job I'd ever had. I'd been moving in Catholic social justice settings my whole life. Ashoka was full of MBA-type people. It gave me an opportunity to think about things from a different perspective and travel all over Latin America. It was great. But it wasn't me."

Later, he organized international conferences on corporate power in the food system for the Center of Concern, a Jesuit-inspired advocacy group, and served as executive director of ActionAid USA, part of a global poverty-fighting organization. The Equitable Food Initiative came calling in 2011.

The lean O'Driscoll still plays soccer in a 45-and-over league, although the Regis midfielder is now relegated to the back line. He bicycles downtown to a shared WeWork office near Dupont Circle from Takoma Park, Maryland—a famously progressive suburb that once declared itself a nuclear-free zone and urged Congress to impeach George Bush and Dick Cheney—where he and Christine live with daughters Anna (17) and Emma (14).

"The pressure I feel in life is, on the one hand, to make sure you've got one foot planted firmly on the other side of the tracks, in the world where poor people really live, where struggles and disenfranchisement are real, and on the other hand to figure out how to get another foot into a world where decisions get made that could change that," he said.

O'Driscoll took to heart a famous exhortation from the late Dean Brackley, S.J., to embrace a mission of "downward mobility." They became close in El Salvador where the former Fordham University theology professor moved to help replace on the Universidad Centroamericano (UCA) faculty the six Jesuits murdered with their housekeeper and her teenage daughter by the army in 1989. The late Charles Beirne, S.J., Regis headmaster during O’Driscoll's school days, was another who picked up their torch. A reflection that Brackley wrote for a Jesuit spiritual guide began: "I invite you to discover your vocation in downward mobility. It's a scary request… The world is obsessed with wealth and security and upward mobility and prestige. But let us teach solidarity, walking with the victims, serving and loving." Reading that"obviously ruined my professional career," quipped O’Driscoll.

Speaking on Christmas Eve, he expressed discomfort with the notion of being singled out as a paragon of service. "I don't think, 'Hmm, it's Thursday. What's the generous thing I have to do today?'" he said. But he concedes that he followed a path chosen by few of his Regis or Harvard classmates, who sometimes "looked at me like I had three heads."

He applauds the current emphasis on service and living up to Pedro Arrupe, S.J.'s call to produce men for others, but "the proof is in the pudding. I remember hearing Steve Duffy say, 'Some give by going. Some go by giving.' There are many different ways of giving back. People have to figure out which is better for themselves."