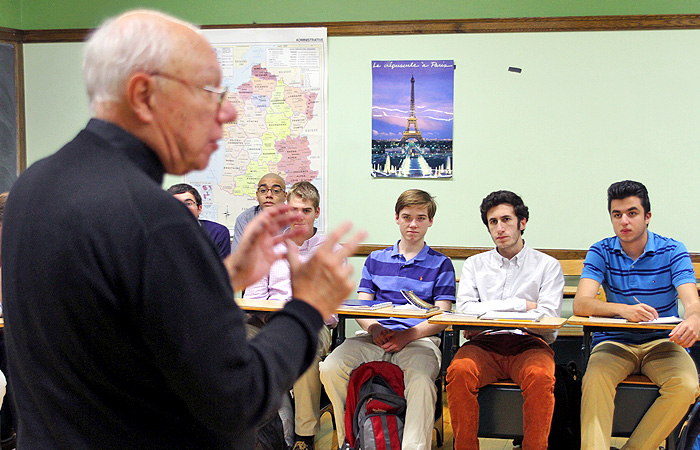 Above: Msgr. John Strynkowski, a priest from the Brooklyn Diocese, spoke to a classroom of seniors enrolled in the theology elective titled, "Vatican II: 50 Years Later". 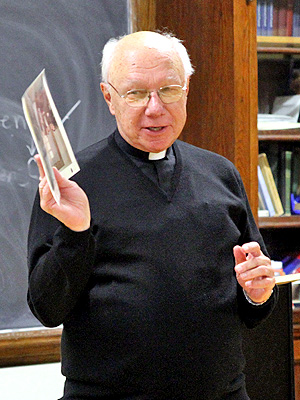 Earlier this year, Msgr. John Strynkowski, a priest from the Brooklyn Diocese, spoke to a classroom of seniors enrolled in the theology elective titled, "Vatican II: 50 Years Later". The class is taught by Mr. Jim Scacalossi '83, chair of the Theology Department.

Msgr. Strynkowski was able to provide a unique perspective on Vatican II. He studied at the Pontifical North American College in Rome during Vatican II and was ordained a priest for the Diocese of Brooklyn in 1963. After ordination, he worked as an official for the Vatican Secretariat of State and at the Vatican for 8 years before becoming rector of the Seminary of the Immaculate Conception (Huntington, NY). He has also worked in Washington, D.C. as the executive director of Doctrine and Pastoral Practice for The United States Catholic Bishops, and has served as the Vicar for Higher Education for the Diocese of Brooklyn. Though he is recently retired, Msgr. Strynkowski attended the XIV Ordinary General Assembly of the Synod of Bishops as the peritus for Chicago's Archbishop Blasé Cupich.

"Msgr. Strynkowski was rector of the Seminary of the Immaculate Conception when I studied there from 1987 to 1991," said Mr. Scacalossi. "He also taught Theology there, and organized a trip to Rome for seminarians and priests in January of 1989, where we actually had time to pray a Holy Hour and celebrate Eucharist with Pope John Paul II in his private chapel."

The senior elective was first offered a few years ago when Mr. Scacalossi realized that—while most students have heard about the Council—very few students know anything about what actually occurred and why it was so significant.

"In the limited time we have, we review how the Church has made major decisions, how it has reflected on the message of Jesus, and how we are to live that message today," said Mr. Scacalossi.

"We look at various theologians and Popes of the 20th century, and then look at the four Constitutions that the Council produced. The students have been very interested, especially this year with the visit of Pope Francis and the meeting of the synod, so I thought it would be neat for them to hear from the professor who taught me about the Council. Little did I know, he was in Rome at the synod when I contacted him."

Msgr. Strynkowski attended the synod as the theological expert for the Archbishop of Chicago. "He spoke about the document the class was reading, Lumen Gentium, and what it means to be Church, today, focusing on the call all of us have, by our baptism, to be holy," said Mr. Scacalossi. After relating Vatican II to the synod, Msgr. Strynkowski then took questions from the students regarding magisterium, the laity, sacraments, and other topics.

"Msgr. Strynkowski offered a compelling perspective about the reforms of Vatican II," said Bryce Mbanefo '16. "Our conversations regarding the responsibility of the laypeople in the dissemination of God’s Word were especially fascinating as the Church moved away from its hierarchical structure and towards a communion of all. This allowed each student to realize that we are all a great part of the Church’s mission. Moreover, our discussion about the people of God’s degree of dedication to the covenant was interesting… Our studies and reading about Vatican II have been deeply informative, but there was a certain authenticity in hearing the opinion of someone like Msgr. Strynkowski."

Jack Roche '16 echoed Mbanefo’s experience. "The textbooks we use serve their purpose, but are often a bit cryptic and broad, so the opportunity to have someone who could be clear and specific was fantastic. And more than that, he was able to answer questions not brought up by the texts. I'd say the most impressive aspect of his visit was his open pragmatism. He wasn’t a fundamentalist, and had a very obvious sense of what happens in the real world, why it happens, and the compromise the church sometimes has to make. I'd say it was definitely a unique experience."

"I gained much insight from Msgr. Strynkowski's very candid opinions on the state of the Catholic Church’s institutional and spiritual dimensions," added Brandon Santhumayor '16. "His unique perspective as a Church leader illuminated our ongoing class discussion regarding Vatican II's impact on our lives today." 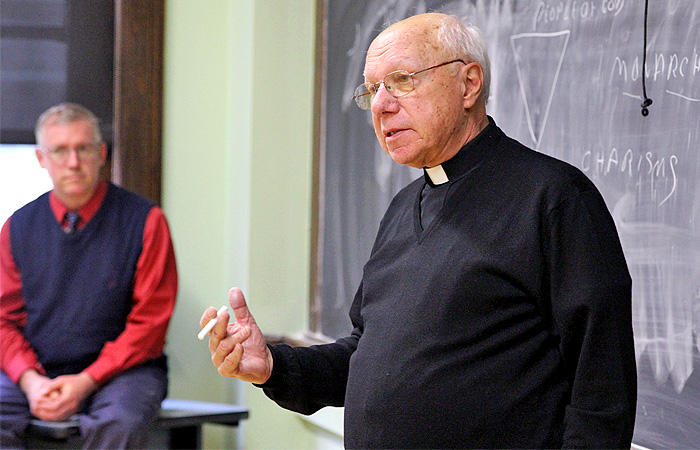 Above: Mr. Scacalossi looks on as Msgr. Strynkowski lectures to the class. 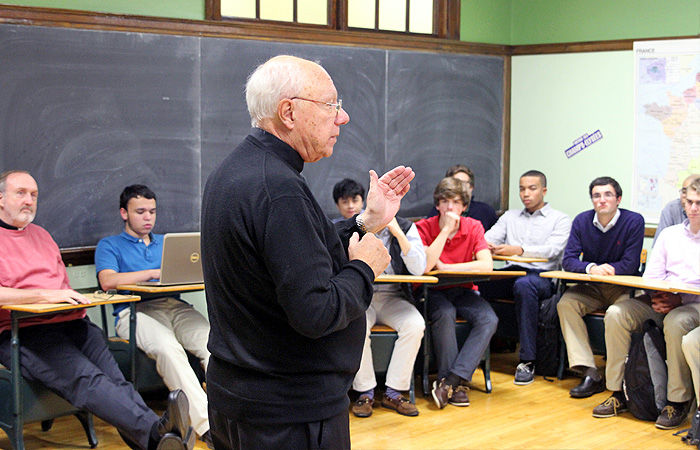