Watch: Mr. Cullen and Mr. Donodeo fulfill their promise to run laps for every donation made between 8:00 a.m. and 10:00 a.m. on Regis #GivingTuesday.

A number of promotional challenges were advertised on Regis #GivingTuesday that added an air of fun to the day and encouraged donor participation. Regis is happy to report that four of the five challenges have been fulfilled, with the final promotion—the mailing of the unique Prayer for Generosity coins to all who qualified—to be completed in early January. 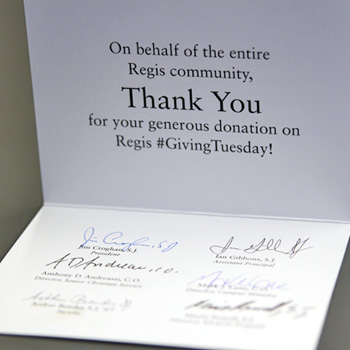 The first challenge on December 1 advertised that Mr. Kevin Cullen and Mr. John Donodeo, longtime Phys Ed teachers at Regis, would both run a lap for every donation made between 8:00 a.m. and 10:00 a.m. on Giving Tuesday. During that time frame, 38 gifts were made, creating a bit of a workout for Mr. Cullen and Mr. Donodeo. The run was documented on video, and highlights can be seen in the clip above.

Next, donors between 10:00 a.m. and 12:00 p.m. were promised a personal thank you note from the six priests on the Regis staff. 64 donors qualified for this promotion, and letters of appreciation are on their way

(Pictured: a thank you note signed by the Regis priests on staff. The mailed note includes a photo of the priests promoting Regis #GivingTuesday.)

Third, donors who gave to Regis between 11:00 a.m. and 1:00 p.m. were promised a "shout out" by Mr. DiMichele in an upcoming morning announcements. 88 donors qualified for this promotion, and on the morning of Friday, December 18 Mr. DiMichele took to the Regis public address system to personally thank these donors. His remarks read as follows:

"On December 1st, Regis conducted a Giving Tuesday campaign that included a number of donor promotions. One promotion advertised a "shout out" from Mr. DiMichele in an upcoming Morning Announcements. The outpouring of support for Regis throughout the day, along with much-appreciated participation from students and faculty alike, was tremendous. 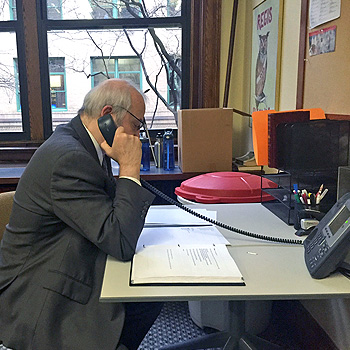 The 2 hour window for the Morning Announcements promotion was no exception, with gifts from donors whose connections to Regis spanned 71 years: from a widow of a 1947 graduate to parents from the class of 2018.

As we prepare for our Christmas liturgy this morning, let us take a moment to acknowledge these 88 donors who represent the close to 2,000 donors who have already participated in the 2016 Regis Annual Fund. Let us allow their spirit of generosity to fill our hearts this Christmas season and continue to be a presence in our daily lives.

In fulfillment of the Morning Announcements challenge, we thank the following 11:00 a.m. to 1:00 p.m.donors on Giving Tuesday..."

Finally, Mr. Mullins, the Dean of Students, was able to generously curtail the JUG hours of a number of students over the past few weeks due to the 118 gifts made between 3:00 p.m. and 5:00 p.m. Donors who gave to Regis during that time were told that each donation would shave 5 minutes off of upcoming JUG hours, and the Regians who have benefited from the donor generosity are overly grateful.

The donations from the above challenges accounted for over 300 of the approximate 500 gifts received on Regis #GivingTuesday. Approximately 350 donors qualified to receive the Prayer coin, which includes 14 brand new donors to Regis. Over one hundred donors who did not contribute to last year's Annual Fund campaign reconnected with a gift to Regis on #GivingTuesday.

Once again, on behalf of the entire Regis community, thank you to all who support Regis!