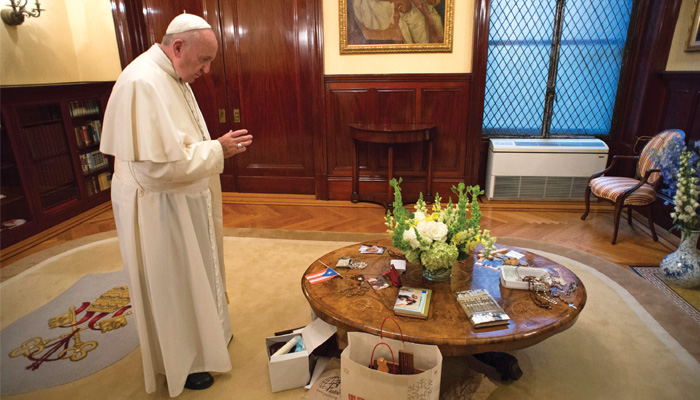 Above: While in the former Grant family home, Pope Francis blessed a handful of personal items from visitors, including a copy of Teach Me To be Generous: The First Century of Regis High School in New York City (center-right on table).

When Pope Francis visited the United States this past September, countless members of the Regis family were involved in many of the events on the pontiff’s itinerary, and all celebrated his time here.

In the week leading up to his visit, two large-scale banners were hung on the Regis façade above the 84th Street entrance: on the left, a welcoming message from the only tuition-free Jesuit high school to the first Jesuit Pope; on the right, a banner displaying St. Ignatius’ Prayer for Generosity.

As the Pope addressed Congress on the morning of September 24, Congressman Andy Harris ’74 was in attendance to hear his message firsthand. At Regis, students and faculty gathered in the auditorium to watch the address live.

That afternoon, a group of about 20 Regians joined students from other local Catholic schools on the steps of Saint Patrick’s Cathedral to greet Pope Francis on his way into the Cathedral. Many alumni, students, and staff also lined the barricades on 5th Avenue to catch a glimpse of the Pope. Vincenzo Guido ’16 assisted as an altar server during the Pope’s evening prayer Vespers service in the Cathedral.

Later that evening, Regis’s news story on the papal residence—along with clips from the school’s video interview with Regis Archivist Fr. Anthony Andreassi, C.O. discussing the residence—was featured in CNN’s coverage of the residence of the Apostolic Nuncio from the Holy See to the U.N., where the Pope has stayed during overnight visits since John Paul II in 1979. The residence was once the home of the Regis Foundress.

On the morning of September 25, George McCann ’67 was among the many family members of 9/11 victims who witnessed the Pope’s visit to the 9/11 memorial. Later that day, when the Pope made his way to Madison Square Garden from Our Lady Queen of Angels school in Harlem (a school attended by a current REACH student), countless alumni, family, and friends lined the Central Park barricades to catch a glimpse of the Holy Father.

Prior to the Mass at Madison Square Garden, Regis faculty and staff volunteered to assist with event setup and procedures. A number of Regis-affiliated priests helped concelebrate the Mass, including Most Rev. Frank J. Caggiano ’77, Bishop of Bridgeport.

Before leaving the residence on 72nd street for the last time on the morning of September 26, Lorenzo Manuali ’17 and his family met Pope Francis and Lorenzo had the opportunity to give him a Regis Science t-shirt.

When Pope Francis arrived in Philadelphia later that day, four Regis seniors and two faculty members were present as part of a Jesuit high school pilgrimage to Philadelphia titled, “2 Philly 4 Francis: Ignatian Pilgrims on the Journey”.

Regis celebrates these and the many other encounters that members of the Regis family were able to experience during the Pope’s visit to the United States!

Below, clockwise from upper left:
Rev. Jim Martin, S.J. with Regians attending the 2 Philly 4 Francis Ignatian Pilgrimage;
Students and faculty gathered in the Regis auditorium to watch Pope Francis address Congress;
Students and faculty gathered on 5th Avenue to witness the Pope’s procession to Saint Patrick’s Cathedral;
Faculty and staff volunteers for the Papal Mass at Madison Square Garden;
Students waited excitedly on the steps of Saint Patrick’s Cathedral to welcome Pope Francis;
Nearing the conclusion of their pilgrimage to Philadelphia, Regis students reflect on the Pope’s visit;
Fr. Croghan, along with Jack Raslowsky P’14 and Cardinal Dolan, awaited the Pope’s arrival at JFK Airport. 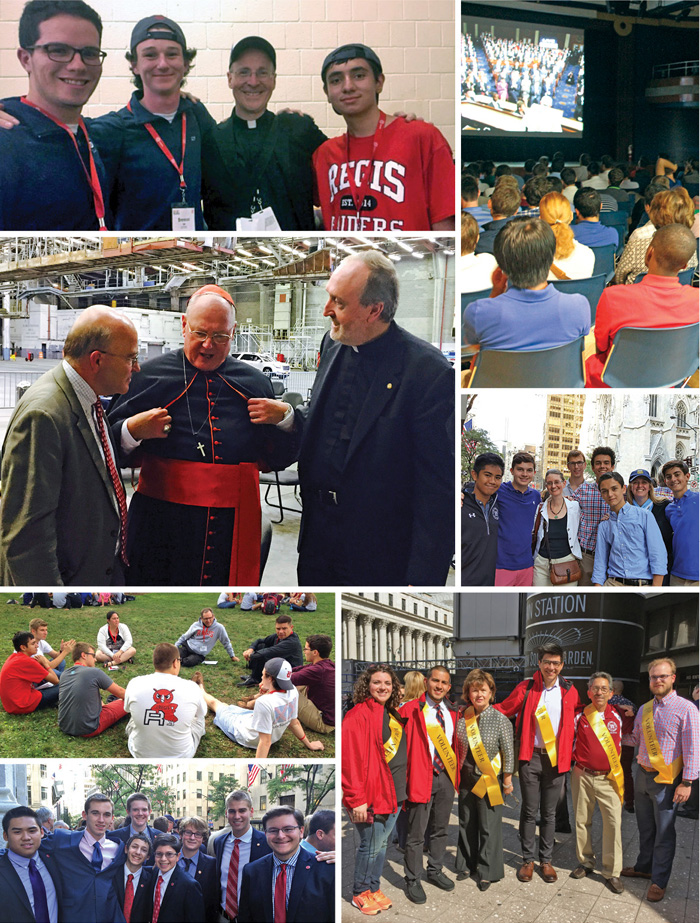