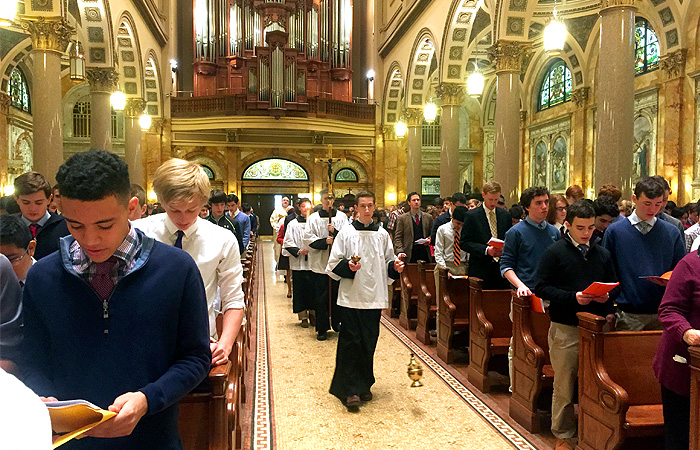 On Tuesday, November 24, the Regis High School community gathered to celebrate the Thanksgiving Liturgy. Below is a reprint of Fr. Anthony Andreassi's homily delivered at the Mass. 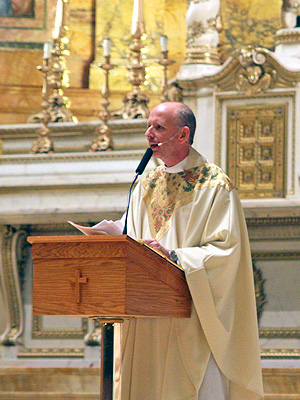 A few years ago I had the occasion to talk with an alumnus of the Class of 1945. It was a fascinating conversation in which Tom recalled so many detailed memories of his time at Regis, which was then almost 70 years in the past. Upon reflection on my conversation with him, what stood out most to me was Tom’s deep sense of gratitude: his profound sense of thanks for what Regis and his parents had given him, and maybe more significantly all the many ways God had blessed him. On some level this really didn’t make much sense to me. It didn’t because Tom grew up and came to Regis in some of the most difficult times in the history of our nation. His profound sense of gratitude seemed to come counterintuitive to all that.

Tom was born in 1927 and his entire childhood was spent growing up during the Great Depression. Like the parents of most of the boys who were students at Regis during that time, his family found it very tough to make ends meet. While his parents—like yours—didn’t have to worry about paying tuition for their son at Regis, there still wasn’t money for much else.

Tom grew up on the Upper West Side (but decades before it was fashionable to live on the Upper West Side) and in order to get to school each day, he had to take a downtown train, which cost five cents, before hopping on a crosstown bus, which cost another nickel (no free bus transfers in 1941). Even those nickels were a lot for Tom’s parents, but they made sure their son had twenty cents each day to get back and forth to Regis.

Often Tom would walk across the park either before or after school to save a nickel. If he did this five times in a week, then he and his buddies who might have done likewise would go out for a bit of fun Friday after school. I think Regians still might treat themselves to a treat at the end of a long week, with maybe a visit to Shake Shack or the like. But for Tom and his buddies this indulgence was a bit more humble. For them it was a visit to a little coffee shop in the neighborhood where they would get two donuts and a bottomless cup of coffee for twenty-five cents: a whole quarter.

A huge, broad smile came over Tom’s face as he was telling how grateful he was for those donuts and coffee and the times spent with his Regis classmates. Honestly, I found it hard to relate. A couple of donuts and some coffee could make a guy so happy, so grateful? Measured against what I had in my own childhood let alone as adult, he had so little. No, I was not getting it.

Then he went on to tell me another story of his Regis years which confused me even more: a story about a kid a couple of years ahead of him who was the star center on the basketball team. The “Big Man on Campus”. But after graduating from Regis, he joined the ranks of hundreds of other Regians to fight in the war. Then Tom told me about the day a couple of years later when it was announced on the loudspeaker as part of the morning prayers that this former star player had been killed in action in the Pacific. Of course now there was no trace of gratitude (let alone joy) on Tom’s face. But nevertheless it had touched him. It had made him realize how blessed he was. This was more than just feeling because after graduation Tom volunteered to join the Navy. He didn’t have to, but he did. He needed somehow to give thanks; to be generous.

But where does that come from? That a person who seemingly had so little but was filled with so much gratitude and then also the desire to give back? Well, while Tom’s deep sense of gratitude goes back more than half a century, this spiritual question about gratitude remains ever topical.

Did not Jesus face a version of this in today’s selection from St. Luke? How was it that ten people had received such an enormous blessing—the freedom from a horrible disease that not only afflicted their bodies but made them outcasts from the entirety of human society—how was it that only one of these people found it in his heart to take the time to give thanks? Where was the gratitude in the others?

Yes, it is an age-old question. But also ever new. There is a column in this past Sunday’s New York Times in which the author takes on this question: why is gratitude difficult for at least some of us? He says that some scientists think it’s all about our genes and that some of us may be hardwired to make us more likely to experience what they call “global relationship satisfaction.”

But what about the rest of us who weren’t lucky enough to have this rare gene? What are we supposed to do especially now that Thanksgiving is upon us and we may not be feeling all that particularly grateful? Well, this New York Times columnist offers a few concrete strategies to help us to feel more thankful. Strategies such as keeping a “gratitude journal” or forcibly smiling repeatedly for 20 seconds multiple times throughout day. But it is precisely here when he gets things a bit muddled. He thinks this is all new stuff—these strategies and the like; that it wasn’t until the modern social sciences that people thought changing one’s behavior could lead to a change of heart—could forge a more grateful heart.

Maybe someone should have given these scientists a copy of the Bible.

The Hebrew Scriptures, just like our first reading from Sirach, is filled with repeated calls to give regular and specific thanks to God for all the Jewish people had been given. They were told to do this whether they felt like it or not: to go to the synagogue or temple each Sabbath and give thanks in loud voice, in joyful song and in quiet prayer. Dozens of the Psalms, just like Psalm 100, which the choir just sang today, do this over and over again. Maybe someone should tell this columnist that the Psalms were Ancient Israel’s “gratitude journal.” Not surprisingly, this call to give thanks is not just in Sirach and the Psalms most everywhere in the Bible.

So where does that leave us with the question of how to give thanks when we may not just feeling it. Well, the short answer is just do it. Give thanks. Let’s name our blessings. All of them. If you are anything like me it is going to take a while. Let’s do it more often than just on the fourth Thursday of November. How about every Sunday, and maybe even a few times during the week too? And if we do this? If we develop a life or prayer in which we regularly give God thanks in the Eucharist and in so many other ways, then something else may happen just as it did for Tom from the Class of 1945.

The more aware we are that we are blessed and gifted—this gratitude may spill over. We will have to do something for someone else. When this happens, we and those around us may notice that we are becoming just a bit more each day like Christ—whose gratitude to the Father was so overwhelming that he just couldn’t help pour out his life for the rest of us.