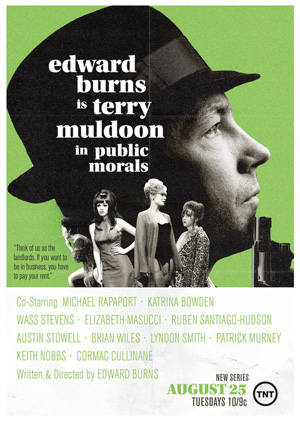 When actor, writer, and producer Ed Burns (Saving Private Ryan, Entourage) first envisioned bringing a story about Irish-American gangsters to television in 1997, Brian Wiles '04 was still two years away from his freshman year at Regis, and Cormac Cullinane '19 was not yet born.

But on Tuesday night, the two Regians will be part of an impressive cast that finally brings Burns's story to life in the new TNT hit drama Public Morals.

Iconic film director Steven Spielberg teamed up with Burns to help produce this 10-episode series that is set in the 1960's and showcases the Public Morals Division of the New York Police Department. In the show, officers attempt to reconcile vice in the city while managing their personal lives as Irish Americans.

(Pictured: a retro-style poster advertising the upcoming premiere of Public Morals pays tribute to the crime dramas of the 1960's.)

"My character is the son of a well-connected inspector in the NYPD, who got his plum job through pure nepotism, so most of the other guys resent him," said Wiles of his role in the series. "Over the course of the season, the other officers test my character in different ways, with interesting results."

As a child, Wiles sang in the Metropolitan Opera, but did not begin acting professionally until after attending graduate school. As a student at Regis, he was very involved in extracurricular clubs that allowed for artistic expression.

"I was a very active member of The Hearn," recalled Wiles. "I did just about every speech category by the time I graduated. And I performed in all the plays for Regis Repertory." 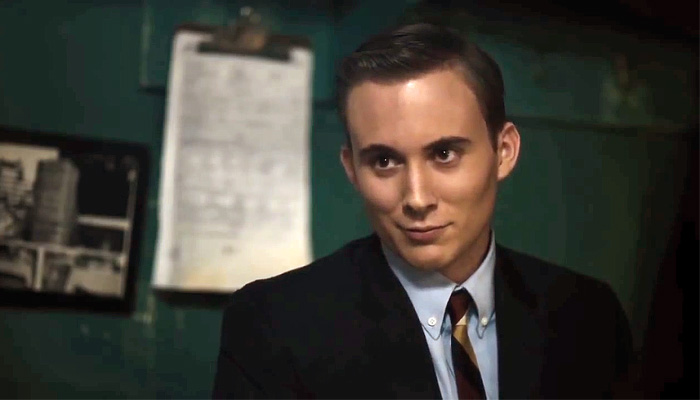 Above: Brian Wiles '04 in a scene from an upcoming episode of Public Morals on TNT.


In preparation for his role, Wiles spent some time learning about the history of New York City.

"Before taking on the role, I read books about New York City cops in the sixties, and about the origins and evolution of the Irish Mob on the West Side. And I re-watched a bunch of films that Ed [Burns] had cited as inspiration—Mean Streets, Goodfellas, The French Connection, among others. Ed also brought in a few of his cousins who were retired cops to play bit parts on the show, and they gave me plenty of insightful little tips."

Having grown up in New York City, Wiles was excited to be a part of a show that examined part of the city's past.

"Growing up, I had heard many stories about what old New York was like: its gritty, lovable character. And I think everyone on the show got to enjoy a little taste of that. It was very cool."

While Wiles's character in the show is beginning his professional career with the police department, Cullinane's character, young James Muldoon, is at a turning point in his life.

"He is on the edge of being a 'bad guy' and he could go on to a criminal life, which is the exact opposite way his father is trying to guide him, creating tension in his family," said the 14-year-old of the character he portrays. "He is rebellious and sometimes arrogant, but he is also independent and intelligent if he applies himself. He has a lot of potential. But whether his potential is for better or for worse is still unclear."

Cullinane has resided in Queens since his family moved to New York from Ireland when he was 8 years old. He has performed as a singer and musician since a very young age, and began acting professionally three years ago. Like Wiles, performing on a show set in New York City's past has been quite a thrill.

"It’s really cool. I got to see and experience what life was like in the sixties. Seeing everyone dressed in period clothes and hundreds of restored vintage cars parked on every block was surreal." 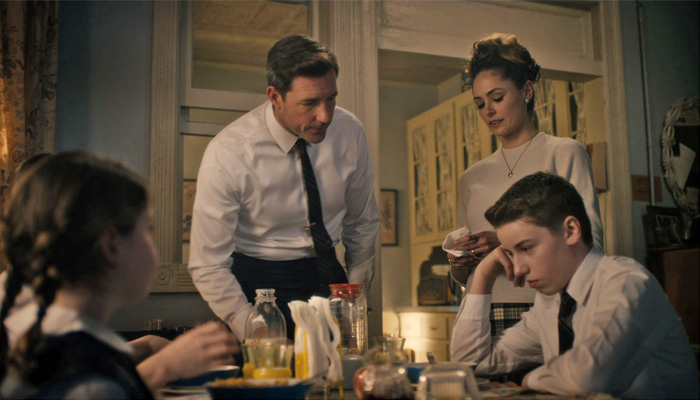 Above: Cormac Cullinane '19 in a scene with actors Ed Burns and Elizabeth Masucci, the on-screen parents to Cullinane's character.


Wiles and Cullinane act alongside a cast of numerous prominent actors, including Ed Burns as the lead character Terry Muldoon, Michael Rapoport as his partner, and Brian Dennehy and Neal McDonough as Irish gangsters.

"Ed Burns is a pretty inspiring guy," said Wiles. "He wrote, directed, and starred in every episode, which is an extremely intense workload. And he was friendly and engaging at every moment. Seeing his unflappable calm and constant passion was a learning experience in itself."

Cullinane, too, found inspiration from the work ethic of Ed Burns.

"He's definitely served as a mentor for me," said Cullinane. "The first day on set, I was a little nervous, but Ed has a way of making you feel completely comfortable. Right before a take, we would sit down, laugh, hang out, and just talk. What I love most about Ed is that he never jumps in right away if something is off. He gives me time to work it out on my own."

On the set, it didn't take long for Wiles and Cullinane to discover their Regis connection.

"Brian asked me what my plans were for high school. I told him that the only school I wanted to go to is Regis, as I loved the mission and the Catholic tradition. He chuckled a bit and said it would be an excellent choice."

When asked if he had given Cullinane any advice before beginning his freshman year, Wiles said he highlighted how Regis forms men for others.

"I told him that my closest friends, without a doubt, are the ones I made at Regis—the education is fantastic, but the people are what make it a truly special place. I told him to keep an open mind and to appreciate the wonderful faculty and students that will form his Regis experience."

Cullinane is looking forward to beginning his Regis experience this September and, like Wiles, is hoping his freshman year will include participating in a variety of clubs.

Among other impressive reviews in the days leading up to the premiere, CNN Entertainment has named Public Morals one of six must-watch shows this fall.

Public Morals premieres on Tuesday, August 25th at 10/9c on TNT. Fans can follow Brian and Cormac online at @BrianNWiles and @Cormacullinane respectively (Twitter and Instagram).

Above: the official trailer for TNT's Public Morals. Public Morals premieres on Tuesday, August 25th at 10/9c on TNT. 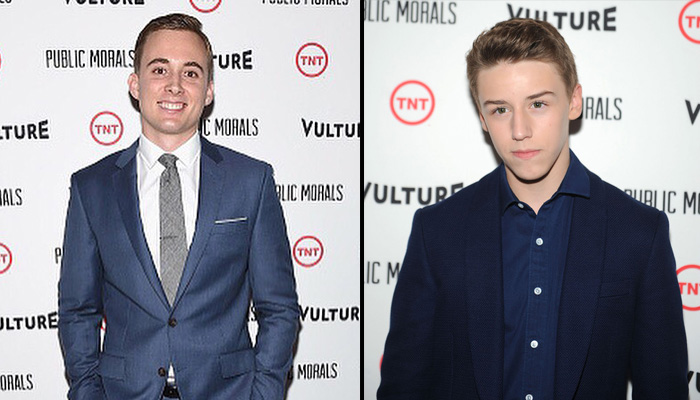 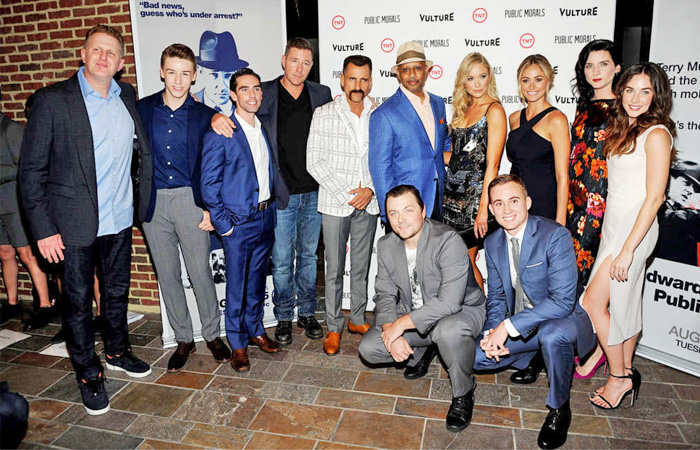 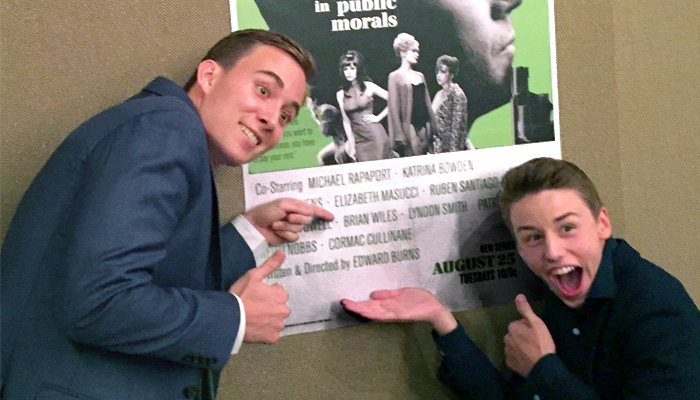 Brian Wiles '04 (left) and Cormac Cullinane '19 (right) excited to see their names featured on an advertisement for the premiere of TNT's Public Morals.