Calendar
Events
Shop
Auction
Employment
Directory
Contact
myRegis
The Judge Presidency: A Look Back at a Decade of Leadership at Regis 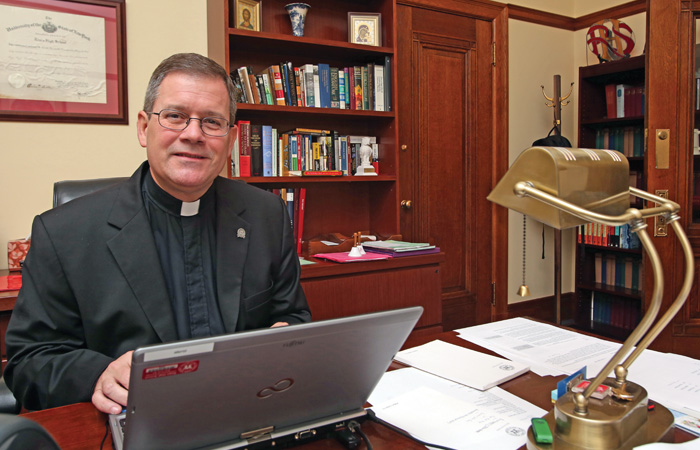 On June 30, Rev. Philip G. Judge, S.J. ’80 concluded his 10 year Presidency at Regis. The second longest in Regis history, Fr. Judge’s tenure showcased his passion for education, his commitment to social justice, and his ambitious drive to preserve both Regis’s history and its future.

A 1980 graduate of Regis, Fr. Judge previously served as an English teacher at Regis, Assistant Principal of Fordham Preparatory, and Principal of McQuaid Jesuit High School before beginning his tenure as Regis President in the summer of 2005. He now serves as the Provincial’s Assistant for Strategic Planning for the USA Northeast Province of the Society of Jesus. He is also the superior at the Jesuit community at America House.

While the annual President’s Dinner recognizes supporters of the Regis Annual Fund at the President’s Circle Level, this year’s reception in May served the dual purpose of honoring Fr. Judge and his Presidency.

“Strong principled leaders are hard to find,” said Mr. Peter Labbat ’83, Chair of the Regis Board of Trustees, to the alumni and friends in attendance. “We found one with Phil Judge. During the last 10 years, Fr. Judge brought what I call a muscular brand of leadership to Regis. Decisive and moral, Fr. Judge tackled any challenge with thoughfullness and clear-eyed conviction for what needed to be done.”

Before the conclusion of President’s Dinner, the Board of Trustees had a surprise revelation for Fr. Judge and the Regis community. Without Fr. Judge’s knowledge, the Board had organized a fundraising effort to dedicate the Regis Green Roof in his honor.

“Throughout his 10 years as Regis President, Fr. Judge has overseen a number of initiatives and projects having to do with the physical space and property, and these initiatives have taken many forms. There’s probably no physical project more dear to Fr. Judge’s heart than the Regis Green Roof,” said Mr. Labbat.

Tucked away above our stately, landmark façade, the green roof functions as a mini-ecosystem that includes native grasses, solar panels, a weather station, an astronomical observatory, apiaries, and herb gardens. Formally opened in 2010, the roof system covers 25,000 square feet of varying soil depths. Its unique design serves as a learning laboratory for students to enjoy the benefits of green roofs and outdoor education. Upon installation, it became the fifth largest green roof in New York City.

Alongside Mr. Thierry Porte ’75, Mr. Labbat proudly announced that an astonishing $750,000 had been raised in that effort, and unveiled a bronze plaque that will be installed on the Green Roof later this summer. The plaque reads:

The Regis Green Roof
Dedicated to Rev. Philip G. Judge, S.J. ’80
21st President of Regis High School (2005-2015)
Who Conceived and Oversaw the Development of This Unique Space, Presided over the Successful Growth of the REACH Program, and Led Regis Through its Centennial, Celebrating 100 Years of Forming Men for Others
May 14, 2015

"The Mercy of the Judge"

From the first days of his presidency, it was evident that a focus on charity and service would be a prominent theme during Fr. Judge’s tenure. As referenced in his inaugural President’s Report in the fall of 2015 (RAN Volume 71, No. 1) a visit to Camp REACH at the University of Scranton was one of Fr. Judge’s first priorities upon his return to Regis. In his ten years as President, the REACH program has continued to grow and succeed, and now boasts close to 100 graduates as alumni or current students at Regis. These efforts have invigorated the Regis mission of making a Catholic education available to young men who could not otherwise afford it, and strengthened our focus on the underserved.

Beyond the REACH program, Fr. Judge’s tenure has overseen an enhanced emphasis on student service initiatives, which include retreats, the senior year Christian Service program, and student outreach trips to disadvantaged areas such as St. Aloysius Gonzaga in the Kibera slums of Nairobi, Kenya.

Shaping the Face of Regis

Under the direction of Fr. Judge, our landmark building has seen a variety of updates and upgrades including:

"A Judge Worth His Salt"

Some of the highlights from Fr. Judge’s tenure as President include the following:

Who Are We To Judge?

A Selection of Reflections from Colleagues, Classmates, and Friends of Rev. Philip G. Judge, S.J. ’80

I saw firsthand his dedication to education. His passion for perfection. His constant desire to improve the plight of those less fortunate. His selflessness in serving the flock. His commitment to the Ignatian ideals of the magis, seeing Christ in all things, and becoming a man for others. Through all of our experiences together his unwavering dedication shone through. Regis has benefited from Phil’s passion and will undoubtedly continue to do so for years to come.

I can honestly say he was one of my best friends and still is today. I have great, great affection for Phil. I think he’s been a fabulous President and a fabulous teacher, and we will miss him greatly. Phil had such a strong sense of what it was that he wanted to do with his life, and his calling was so strong. I was always impressed with the clarity of that calling, and I think we can say that he’s lived up to that calling with amazing grace and excellence, and its been fun to watch that turn into such a great career.

Fr. Judge was a busy man during his ten years as Regis President, but a few things stood out for me. First, Fr. Judge officiated both at the Regis Chapel and in Timisoara, Romania at my wedding. Second, Fr. Judge baptized my daughter, Gloria. There were many times during his successful tenure at Regis when it might have been easy to forget that Fr. Judge had a job more important to us all than serving our school. But Fr. Judge never forgot that he entered the Society of Jesus to become a priest not a president.

When I first met Fr. Judge as a freshman in 1995, he was my English teacher and advisor. In the two decades since, Fr. Judge has shepherded Regis through a magnificent centennial celebration that focused singly on Regis’s Catholic mission, all while being the same man I remember from long ago: dedicated, generous, good humored, and energetic. Thanks to his leadership, Regis has entered her second century with a still noble heart that will be strong to endure.

Fr. Judge is highly regarded among the student body: from his freshman advisees, learning the hard way not to use weak verbs, to seniors in his English courses, trying to analyze a play in his Theater in NY class. His thought-provoking homilies at school Masses and his guidance on retreats have defined him as a religious leader of the school. As a priest, advisor, teacher and friend, he has had a powerful impact on the entire community.

I cannot overstate how much I treasure the time that I have known Fr. Philip Judge, my freshman advisor. Over the past four years, I have come to know him as one of the friendliest, most dedicated members of the Regis community. Despite his hectic schedule, many obligations, and endless workload, his door is always open for visitors to stop by, whether he is handwriting thank you letters on behalf of the school or marking freshman English papers. Fr. Judge embodies the Jesuit ideals that define Regis, being a man for others and striving for the magis, and I truly feel blessed to have known such a great man and role model.

In His Own Words

A Selection of Quotations from the Writings of Rev. Philip G. Judge, S.J. ’80

If each of our graduates is to serve as an instrument of change, to be a real co-worker in the divine project of redemption, then all of our students must know the diversity that exists in so many ways around them. In many ways Regis has “gone global” in increasing increments, not to foster some sightseeing mentality, but to expose our students to the realities they might not otherwise notice and lessons that should not be ignored. Solidarity cannot happen in a local vacuum, even it if is the very diverse one we create on 84th Street.

— Let Us Work the Redemption of the Human Race, Winter 2006

Building a real community is about cooperation and support and respecting the gifts and talents of others. Too often education for gifted students seems to be about top GPAs, getting into only selected colleges or beating out the next person. That is not the way we work at Regis. Perhaps, ironically, individual commitment to the magis really does build up the community. I trust it seems but a short step to note that this is how we build up the Body of Christ. May Regians continue to take that lesson into the world!

How does a school teach an attitude or purpose? By making it an expected part of what Regians “do”, by reflecting on the meaning of service itself, and by providing extensive opportunities for that experience. After all, life is never about being gifted or bright and cherishing such a label. Rather, it is always about what we do with the gifts God has given us: being men and women for others.

The success of a Regis education, though, lies in whether or not we live up to our mission to educate talented Catholic young men for leadership in service, particularly those who could not otherwise afford such an education... We challenge, goad, and sometimes prod the young men in our care to the magis in everything from academics to extracurriculars.

Regis is not a second home because a group of unconnected strangers call it that. There is a spirit of intellectual inquiry, service, and Christian leadership, as well as human friendship, which tie us together.

The Second Vatican Council taught us many things, including that we must learn to imagine the ministry of the Church as the ministry of all the baptized, and not simply the ordained. It comes as no surprise that the Jesuit phrase “men for others” is consciously and actively taught and developed in all of our students, not just those who would consider a religious vocation. Service in the Church and in the world is a hallmark call for all of us who have graduated from Jesuit schools, but particularly from Regis where the gift of education for leadership clearly demands a generous response.

To be here as a student was an amazing gift; to return as a faculty member was a great honor, to serve for ten years as President was something I never imagined and got talked into by persistent classmates. I’m very glad they did. Indeed, it has allowed me to ‘know the place for the first time’ and really understand the transformative power of Regis and what it might continue to be for future generations.