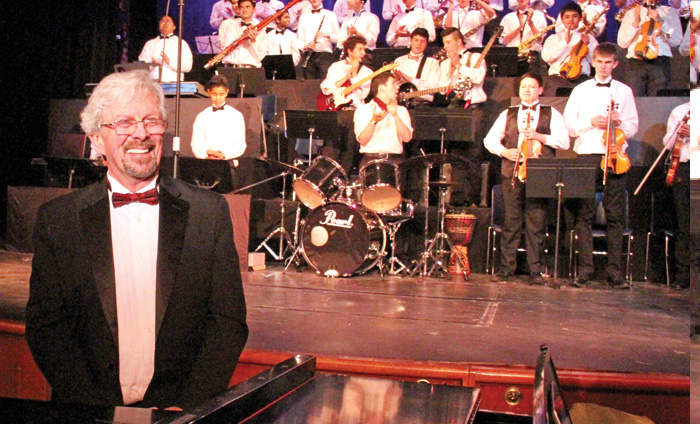 Jim Phillips began his career at Regis in the fall of 1984. His tenure included numerous years as the chair of the Fine Arts Department, and he taught a number of courses within that area of study, from Music Appreciation & Theory to Computer Studies. Most notably, Mr. Phillips served as Musical Director and was involved in decades of Regis Repertory musicals and band performances.

This spring, at the conclusion of conducting his final concert at Regis, Mr. Phillips was surprised with a video tribute with well-wishes from alumni and some reflections by current seniors. Lauren Moon ’15 addressed the audience and stated, “He always smiles and laughs regardless of how many mistakes we’ve made—and trust me when I say we have made a lot. Mr. Phillips puts everything he has into what he does, and no one can truly replace his drive and determination to make the Regis Rep the best that it can be.” Mr. Phillips’s dedication to Regis will be long remembered and sorely missed!

Pictured: Students and friends celebrated Mr. Phillips and his career at the spring Jazz Concert. Left: Mr. Phillips looks on as the band plays Sing Sing Sing as a tribute to him. Middle: Students pose for a photo with Mr. Phillips after his final concert. Right: Image from the alumni video tribute to Mr. Phillips, which can be seen in the news story found at wpnews.regis.org.

The Dedication of Jim Phillips. Over the last three decades, Mr. Phillips has made tremendous contributions to Regis, not only as an outstanding teacher of music history, but also as director of the Band and the Regis Repertory musical productions. Whether it is at 7:45 a.m. for an early rehearsal with the band or a dress rehearsal that goes past 6:00 p.m., you can always find Mr. Phillips hard at work in the auditorium, perfecting the shows that win the applause of thousands each year. His commitment to the growth of each performer, singer, and musician has earned him the respect and admiration of countless Regians. — David Vascones '14 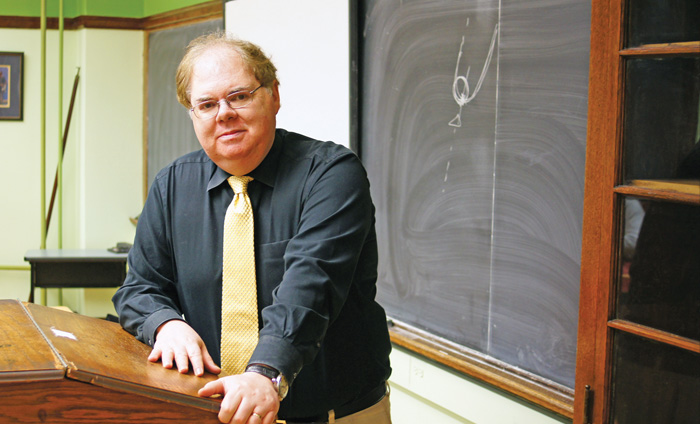 John Murphy, long-time member of the History Department, retired at the conclusion of the 2014-2015 academic year after a 27 year teaching career at Regis that began in the fall of 1988. While he was a member of the History Department for his entire tenure, Mr. Murphy also taught freshman English and Writing early in his career. He also previously served as a moderator of The Regian.

Many of the notes Regis received from alumni congratulating Mr. Murphy on his retirement highlighted his incredible knowledge of history and his unique classroom wit. Rumor has it that for the past 20 years, Mr. Murphy may very well be the second most-quoted individual in The Regian (just behind Ferris Bueller). Some favorite quotes include: “One day, a KGB agent will show up in this class pretending to be me. If you’re smart, you’ll play along.”  /  “Put your desks into a square all you want, men, you’re still getting the quiz.”   /  “We can’t send you to Siberia, but there is Staten Island.”   /  “Your book report was as much fun as reading the phonebook.”  /  “Let’s get a new face in the crowd...”

But perhaps Mr. Murphy’s most important contributions were not always related to academics. One alum wrote, “I remember that Regis was a tough time. I never seemed to avoid trouble... you gave me heartfelt advice and told me to stay out of trouble because I was a good kid. No other teacher had done that for me... For being such a great role model, from the bottom of my heart I thank you.”

Pictured: Mr. Murphy will be remembered as a great lecturer with a sharp memory of historical dates and figures. Left: Mr. Murphy in discussion with long-time friend and retired faculty member Mr. John Connelly ’56 P’90’99. Middle: Mr. Murphy calling on a student in his class. Right: Mr. Murphy engaged in an animated lecture with his history class.

The Wisdom of John Murphy.  If his unforgettable quotes tell us anything, it is that Mr. Murphy keeps his students entertained. Walking into European History class, I did not know what to expect aside from simply reading passages in textbooks, but Mr. Murphy went far beyond that. What made Mr. Murphy’s class so memorable for me was not merely his outstanding knowledge of history (he could give a lecture off the top of his head and teach us more than a textbook ever could), but also how he treated each and every student as he would his own son, either through a special nickname or some warm-spirited humor. Thanks for all that you have given Regis over your career. — Alis Dicpinigaitis '13