On May 14, alumni and friends of Regis gathered at 84th Street for the 2015 President’s Dinner. The annual event, which was started in 2014, recognizes supporters of the Regis Annual Fund at the President’s Circle Level. At the request of the Board of Trustees, this year’s event served the dual purpose of honoring Rev. Philip G. Judge, S.J. ’80 who concludes his 10-year Presidency at Regis this June.

Pleasant May weather allowed the evening's cocktail hour to begin in the Regis Quadrangle, where Junior Ronald Romano ’16 and sophomore Alex Quizon '17 performed classical music on a piano that had been moved into the Quadrangle for this special occasion. Before dinner began in the auditorium, the Very Rev. John J. Cecero, S.J., Provincial of the USA Northeast Province of the Socity of Jesus, offered grace.

At the conclusion of dinner, the evening's program began, and with that the tributes to Fr. Judge commenced. First to speak was Mr. Anthony J. DiNovi, Jr. ’80, former member of the Regis Board of Trustees and longtime friend of Fr. Judge. 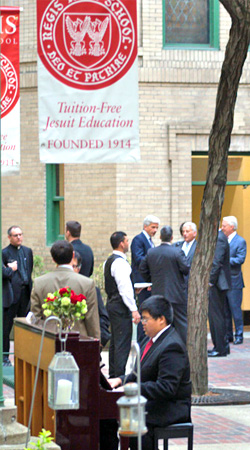 "I can honestly say he was one of my best friends and still is today", said Mr. DiNovi. "I have great, great affection for Phil. I think hes been a fabulous President and a fabulous teacher, and we will miss him greatly."

Reflecting on their days as classmates at Regis, Mr. DiNovi added, "Phil had such a strong sense of what it was that he wanted to do with his life, and his calling was so strong. I was always impressed with the clarity of that calling, and I think we can say that he's lived up to that calling with amazing grace and excellence, and its been fun to watch that turn into such a great career."

Following DiNovi's remarks, Mr. Anthony J. Domino, Jr. '80 P'08, former Chair of the Regis Board of Trustees, addressed the audience with his own reflections on friend and former classmate, Fr. Judge.

"I really remain convinced that... the Regis that he's helped to refine, and tweak, and mold, and shape is a far better place. And it's a place that will continue on a path further into the future that is far better off."

Finally, Mr. Peter Labbat ’83, Chair of the Regis Board of Trustees, took to the stage to provide his own remarks and provide an overview of the highlights of Fr. Judge’s tenure as President.

"Phil, I have no doubt that tonight, our Foundress, Julia Grant, looking down from heaven, joins us in thanking you so much for all that you have done: for your sacrifice, for your service, and for your steadfast devotion to our alma mater."

After concluding his remarks, Mr. Labbat invited Fr. Judge to the stage. After a sustained standing ovation, Fr. Judge provided brief remarks expressing his hopes for Regis in the years to come.

"I am immensely grateful for your support over the years and for the unimagined opportunity to lead Regis for the past decade. For all of that I thank you and I look forward to seeing Regis continue to identify hopes and challenges in the years ahead." 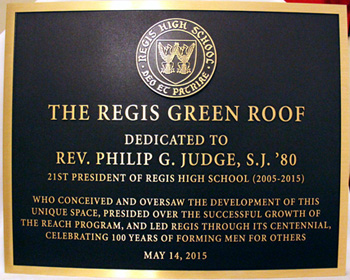 Before the conclusion of the evening’s program, the Board of Trustees had a surprise revelation for Fr. Judge. Without his knowledge, the Board had spent the past few months organizing a fundraising effort to dedicate the Regis Green Roof in Fr. Judge’s honor. Along with Mr. Thierry Porte '75, Mr. Labbat proudly announced that an astonishing $750,000 had been raised in that effort, and unveiled a bronze plaque that will be installed on the Green Roof later this summer. The plaque reads:

Who Conceived and Oversaw the Development of This Unique Space, Presided over the Successful Growth of the REACH Program, and Led Regis Through its Centennial, Celebrating 100 Years of Forming Men for Others
May 14, 2015

A scotch and champagne toast was offered in Fr. Judge’s honor, and the program concluded with the singing of the Regis Alma Mater.

A video capturing the program portion of the evening is embeded at the top of this news article. 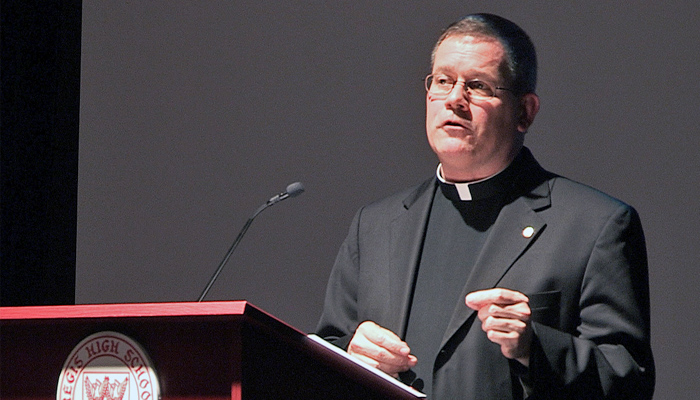 Above: Rev. Philip G. Judge, S.J. '80 provided brief remarks expressing his hopes for Regis in the years to come. 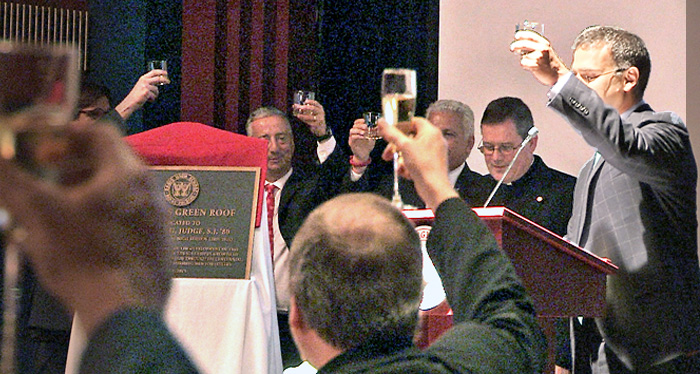 Above: A toast was offered in Fr. Judge's honor following the unveiling of the Green Roof plaque. 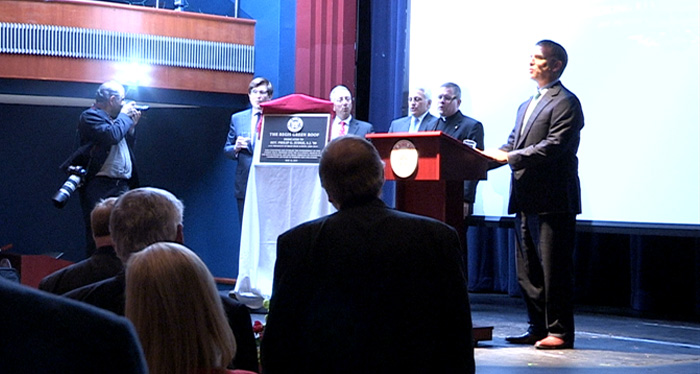 Above: The singing of the Regis Alma Mater concluded the evening's program.