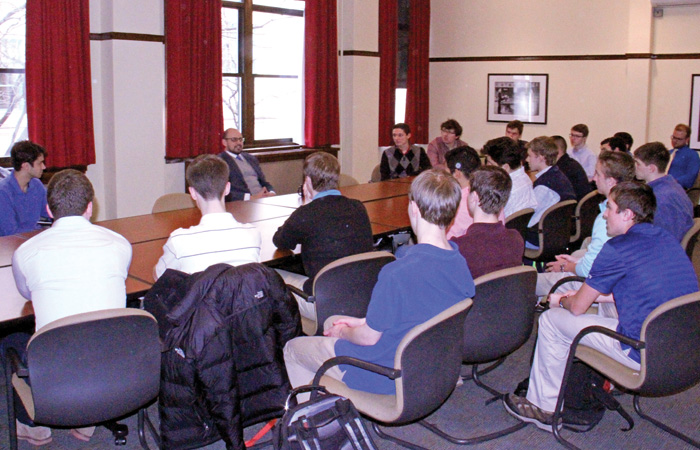 In the main foyer of the Regis library, there is a small bookshelf dedicated to Regis alumni authors. On the average morning, students are not much concerned with alumni publications, or their own legacies. They’re huddled at tables or hunched in chairs, furiously studying for the next exam or preparing a last minute homework assignment. How many of these young men will go on to publish works destined for that shelf? The current works range widely: from the philosophical Fat Wednesday: Wittgenstein on Aspects by John Verdi ’68 to the personal Bat Boy: my true life adventures coming of age with the Yankees by Matthew McGough ’93; from historical studies to literary novels; from studies of the Jesuits to studies of Seinfeld. This breadth speaks to the many different fields that alums enter and lead.

This past year, two important works of literary fiction were added to that shelf: We Are Not Ourselves by Matthew Thomas ’93 and Redeployment by Phil Klay ’01. These two books have not only made major news in the halls and resource centers at Regis, but also in the broader American public. Mr. Thomas’s reported million-dollar advance paved the way for critical acclaim as his novel was released in spring 2014. Mr. Klay’s collection of short stories, Redeployment, has also been critically-acclaimed, and made special news when it received the National Book Award and even praise from President Obama himself. The buzz surrounding these two works led my colleague, Kyle Mullins ’05, and me to develop a course titled “Regis Contemporary Fiction.” We are both passionate about teaching living authors because their works speak the language of our times and typically engender student interest. For authors who are also fellow Regis alumni, the sympathy and connection is even more immediate. With the encouragement of educational innovation guru Christian Talbot ’93, a classmate of Mr. Thomas’s, Mr. Mullins and I developed the curriculum and are currently offering the pilot version of this course as a third trimester senior elective.

Part of the draw for our students was the unique opportunity to meet each author. In the true spirit of Regis alumni, Mr. Klay and Mr. Thomas have been generous with their time, despite their recent fame and busy schedules. Mr. Klay is set to visit Regis late this April, to speak with students who are studying his book. Mr. Thomas visited in late February. He spoke with a small group of students in the afternoon, and then gave a reading and fielded questions later that evening. After meeting the writer he had been studying, senior Dan Sullivan ’15 said, “it’s rare you can have a frank and unguarded chat with an author. Our mutual connection with—and love for—Regis tore down any preexisting barriers in the conversation…mutual trust was understood.”

We Are Not Ourselves features Regis in a prominent way, as the high school that main character Connell Leary attends. There are memorable descriptions of the nervous energy on the first day of freshman year, as Connell and his classmates gather in the quad and get to know one another. Mr. Thomas also depicts the challenges of running cross country at Van Cortlandt Park and the intensity of competing for the speech and debate team. There are even a few teachers who might be reminiscent of faculty members here, though the author insists that the characters are entirely fictional.

While the characters may be fictional, Mr. Thomas’s decision to include Regis by name is rooted in his artistic commitment to realism. In the question and answer component of his visit, Mr. Thomas spoke about wanting to “get things right,” in terms of local detail, and his depiction of Regis High School is no exception. From its location and architectural design, to its diverse student body from around the city, to the “prestige” associated with the school by a few characters, Mr. Thomas does indeed get Regis right.

In addition to a realistic depiction of the school, Mr. Thomas also acknowledges the impact of his education here on his career as a writer. His experience at Regis, and perhaps also as a teacher at Xavier High School, led him to call the book “Jesuit-influenced.” He also mentioned the positive impact of Regis teachers on him as an aspiring writer; he paid special homage to Michael Vode, as a teacher who helped him grow, from his youthful days as a student, through his maturation as a writer.

Students have reacted positively and thoughtfully to reading a book that hits so close to home. Not only does We Are Not Ourselves vividly depict Regis and New York City, but also it depicts the challenges of adolescence in a realistic and engaging manner. Senior Ryan Corrigan ’15 reflects, “We’ve always talked about identifying with characters in books and it has been a literary thing. But now we get to experience a character who has gone through some of the same things we have.” As noted above, Mr. Mullins and I like to teach contemporary works because students can relate to current-day concerns. Reading a bildungsroman about an intelligent, ambitious, conflicted young man from Bronxville coming to Regis makes those concerns all the more relatable.

Students were even asked to write a reflection paper discussing how We Are Not Ourselves informed their own quest for identity and meaning at this stage in their lives. Another senior, Sean Singleton ’15, adds, “Reading a work that incorporates elements of the Regis experience both invited me to personally reflect on the many decisions and stresses I have faced at Regis, and presented me with a new perspective on the joys and struggles of all Regians both inside and outside the classroom.” All alumni can relate to those joys and struggles, and We Are Not Ourselves gave our current students much to reflect upon: from life at Regis, to their relationships with their parents; and from relationships with girls to a preview of college life.

Of course, We Are Not Ourselves is about much more than Regis and adolescence. It is also about women in post-WWII America, New York City and its demographic changes, and indeed the American dream. Similarly, Phil Klay’s Redeployment ranges far and wide in depicting the experience of soldiers fighting in or returning from our 21st century wars in the Middle East. Each short story is told from a different perspective, from a typical soldier struggling to adjust to civilian life in the title story, to a military chaplain trying to best serve his comrades. Though Regis does not appear by name, the story “Prayer in the Furnace” focuses on a military chaplain, who consults with an old teacher and priest, Father Connelly, who cannot help but remind at least some readers of Mr. John Connelly ’56 (if the name is not enough, to solidify the connection, this character eschews email in favor of a typewriter). While none of our students can relate quite so closely to soldiers as to Connell Leary, Redeployment has captured the attention of students for a few years, as we have been teaching the title story “Redeployment,” since its early publication in the literary journal Granta. This story was so inspiring to seniors Brandon Baldovin ’15 and Chris Kelly ’15, that they developed an independent study course, “Camouflage and Dog Tags,” which focuses on Mr. Klay’s book and other works about the Iraq and Afghanistan Wars. Mr. Klay, with his interest in civilian engagement with conversations about war, would no doubt be proud of the impact his collection has made.

Regis alumni are leaders in many fields, and this year also saw great news from the sciences about John O’Keefe’s ’57 reception of the Nobel Prize in Medicine. But recent works of fiction speak to current students in a special way. Indeed, with several alumni teaching in the English Department, with publishing house Farrar, Strauss, and Giroux still one of the most elite presses, and notable alumni writers making news, the literary world can feel pretty Regis heavy these days. Senior Matt Babich ’15 summed it up this way: “The fact that Contemporary Regis Fiction is taught by Regians, to Regians, about the works of Regians makes it something experiential and intellectually satisfying.” Of course, we teach a variety of authors, often seeking those who have had different experiences than Regians to expand young imaginations, but it’s undeniable that there’s something special about reading a Regian. Yet, notwithstanding some familiar places and faces,  Redeployment and We Are Not Ourselves expand our horizons well beyond the walls of the quad or memories of beloved teachers. Like all great writing, they call us to empathize with other minds and envision other worlds. The authors have been generous with their time and their talents. And for that, we are all grateful.

James Kennedy ’02 is currently in his seventh year as a member of the Regis faculty in the English Department.