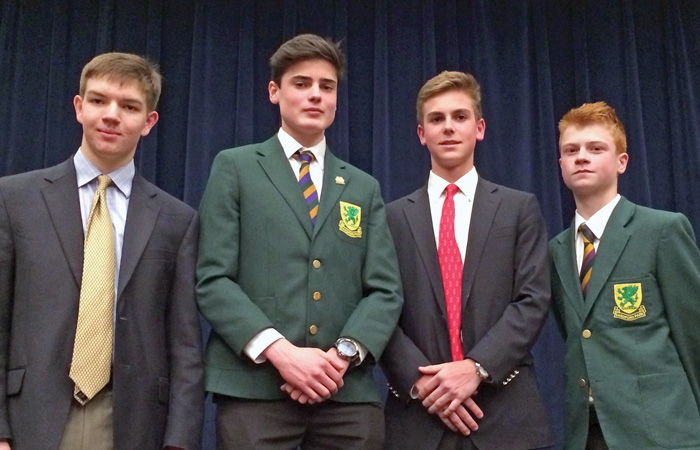 Above: The Regis and Sandford Park School debaters faced off last month in an international debate.

Sandford Park School—a small, non denominational, coeducational school situated in Ranelagh village (a suburb of South Dublin)—has a very strong tradition of debating in both the Irish and English languages. They are the only school in Ireland ever to hold the national titles in the two languages in the same year (2011). Sandford Park School is also noted for the quality of its Music and Drama programs and equally for the strength of its academic focus.

The Sandford School set an apt tone for the night—one of cultural appreciation—with a choir rendition of “Danny Boy.” When the time for debate began, both teams made their cases with homeland flags draped behind them.

The debate went above and beyond expectations, with many guests discussing the arguments afterward at a post-debate reception, which allowed members of the Regis family to interact with their Irish guests. Senior Brendan Powell ’15, one of the two debaters representing Regis, found the experience quite enjoyable.

“Their oratory was superb. It really was a lot of fun with the audience, and the jokes and ensuing applause added a new element to the debate that we normally don’t experience.”

“I particularly enjoyed the clash in styles between the two teams,” added Colin Donnelly ’15, the other Regis debater.

Above: The Sandford Park School's rendition of Danny Boy at the International Debate with Regis High School.

Above: Opening arguments at the International Debate between Regis High School and The Sandford Park School of Dublin, Ireland.