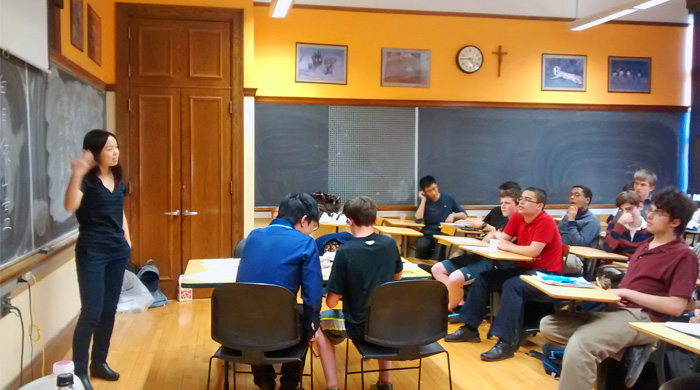 On Wednesday, April 1, 25 Regis students from the first and second year Chinese courses attended an after-school seminar at Regis featuring the art of Chinese calligraphy.

The seminar's discussion first focused on brushes, ink, and other accessories used in Chinese calligraphy. Mr. Shek then demonstrated and analyzed different Chinese calligraphy styles, including the Oracle Bone Script of c. 1500 BC, the Seal Script of c. 500 BC, and the Standard Script of c. 200 AD to the present. The Regians in attendance were asked to identify examples of each style.

The seminar was organized by Mr. John Hannon '05, who is completing his second year as a member of the Language Department faculty.

"I asked our visitors to discuss the history of Chinese calligraphy and the evolution and characteristics of different styles, and then to help workshop our students' handwriting," said Hannon. But the knowledge they were able to bring to the classroom was better than expected.

"I thought they would be showing photographs, but instead they were able to reproduce themselves the most ancient forms of any character the students named. I would compare this to someone tracing any English word back to its Indo-European roots."

Following the discussion, five student volunteers tried their hand at calligraphy using brushes and special Xuancheng calligraphy paper. All students then had the chance to copy a Chinese poem from the Tang Dynasty, "The Bright Sun Falls Behind the Mountain," while the guest lecturers offered pointers on how each student could improve his Chinese penmanship. The enraptured students were ushered out of the room just in time for the school building to close for spring vacation.

"The seminar was a great success for everyone involved," said Hannon. "Our students learned a great deal about the history of a topic—namely, Chinese characters—that they have already spent long hours studying."

"Our guests were delighted to have such an enthusiastic audience for a topic that they themselves have spent even longer hours studying," added Hannon. "I hope we will be able to organize more events on calligraphy in the future." 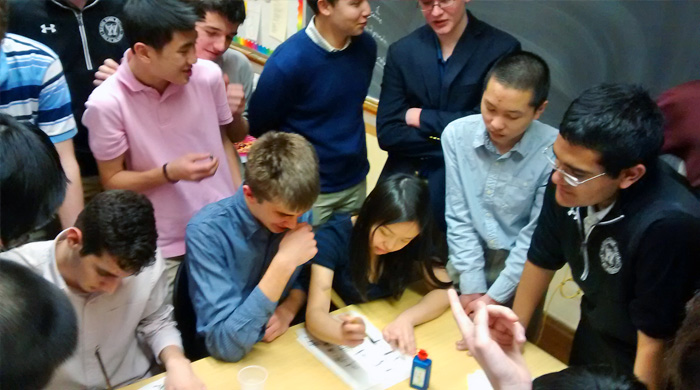 Above: Fang Hui, a Ph.D. student at NYU's Institute of Fine Arts, shows Declan Cassidy '18 how to use a brush and ink to write Chinese characters. 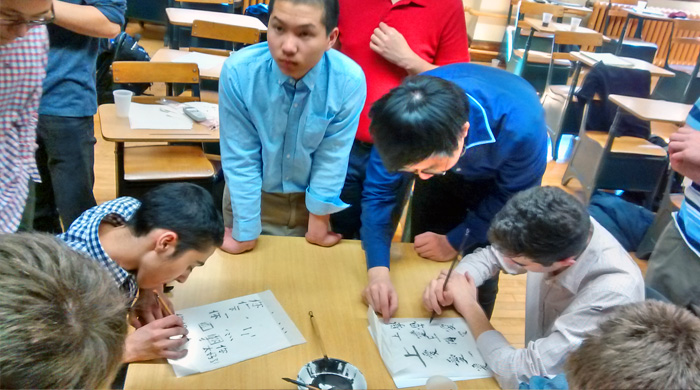 Above: John Shek, a Master's student at NYU's Institute of Fine Arts, walks Daniel Logozzo '18 through writing Chinese characters with a brush and ink.