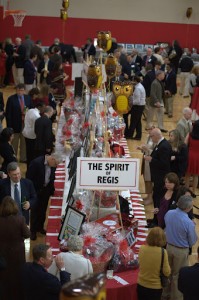 The Regis Parents' Club held their annual fundraising event, the Regis Auction, on Saturday, April 20. As is becoming a tradition, the amount raised far exceeded expectations. Gross proceeds from the auction and raffle were an eye-popping $660,000, with net income (after expenses) projected to be an estimated $612,000.

Truly extraordinary support was offered during this year's Technology Challenge, a fundraising challenge to financially support the replacement of faculty, staff, and student computers and the installation of Apple TVs throughout the school. The Technology Challenge brought in an unprecedented $219,000. For many parents, Auction night also served as the first opportunity to see the refurbished school library, made possible by last year’s generous contributions during the Library Challenge.

The night could not have been possible without the help of numerous volunteers, including over 50 dedicated parents and over 80 Regis students. Back for another engagement, Mr. Eugene Flinn P’10 served as the Live Auction auctioneer, with Mr. Jack Flanagan P'11'14 assisting with recognizing and calling bids. Guest auctioneers included the always entertaining Mr. Eric DiMichele and Coach John Donodeo P'02.

Bidders raised their paddles for the prizes and unique experiences donated by parents, alumni parents, faculty, staff, and friends of Regis. As has been the tradition in recent years, alumni from near and far generously contacted the Auction Committee and thoughtfully donated goods and services. This year, the more popular auction items included: two tickets and a behind-the-scenes tour of Saturday Night Live, lunch with Patrick Fitzgerald '78, an oil painting by Adrienne Trebilcock P'01, dinner at a local firehouse, and tickets to Game 1 and Game 2 of the 2013 World Series.

The annual Auction is a tremendous celebratory event, but it also adds significantly to the financial support Regis needs every year. Regis is thankful for the many volunteers who helped run this year’s event, and to the many guests who attended and supported Regis through auction bidding.