Above: Senior forward Declan Cronin '15 throws down a two-handed dunk after a great assist from junior guard Shane O'Donoghue '16. 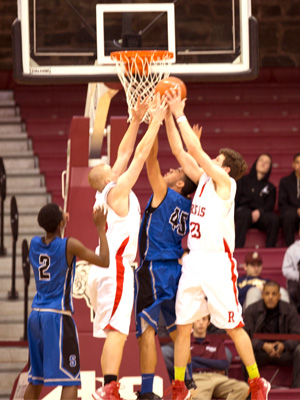 For the second consecutive year, the Regis Varsity Basketball team secured the CHSAA B-Division City Championship. The win came Friday night against league rival Salesian, with a final score of 62-52.

The Regis Varsity secured the top seed in the playoffs after winning the regular season, something Regis had not accomplished since 2007. Then, an impressive 75-60 semifinal victory over St. John's Prep last week earned the trip to the 2015 city championship game hosted by Fordham University in the Jesuit school’s historic Rose Hill Gym.

(Pictured: Regis forwards Slater O'Brien '16 and Declan Cronin '15 battle for a rebound early in the city championship game against Salesian.)

Despite having never trailed in the game, both Regis and Salesian showcased streaks of offense that created noticeable momentum shifts throughout the game.

Perhaps, though, no play was more momentous than Declan Cronin ‘15’s two-handed dunk late in the game off of a no-look pass by Shane O'Donoghue '16 (video above). The play ended a scoring drought for Regis and curbed a Salesian run that had cut a double digit lead down to 4 points.

"Shane fired a really nice pass to me. Almost all of my dunks this year have been set-up by a great assist from one of our guards," said Cronin. "This will be the one play that will stick with me probably my whole life. The moment after I dunked it, our crowd exploded." 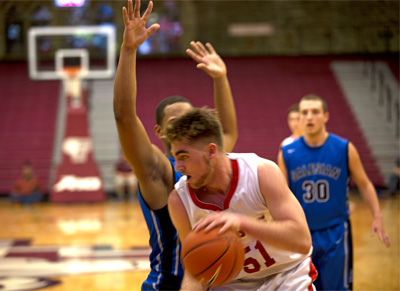 An equally memorable performance came from senior forward Mike Cerone '15. Despite foul trouble, which kept him on the bench for roughly a full quarter of the game, Cerone finished with ten points and an impressive 18 rebounds.

"Putting up a lot of points is always a great feeling, but for me, rebounding is something I take pride in. It's not always as glamorous, but when you look back at how your team controlled the tempo of the game, and how much effort your team gave, rebounds can always represent the difference," said Cerone.

"I was itching to get back in every second I was on the bench, and tried to make the most of every opportunity while I was playing."

Declan Cronin '15 and senior guard Charles Gavigan '15 both finished with a game high 16 points each.

"Winning back-to-back titles is amazing," added Cronin. "I think I speak for all the returning guys when I say that it means a lot to see our hard work over the last two years pay off in this way. And, this being our senior year, we're certainly going out on top."

With the win, Regis advances to the state title game for the second year in a row. They will face The Park School (Buffalo) at 1:00 p.m. next Saturday, March 14 at Fordham University. Tickets will be on sale at the game for $10 each. 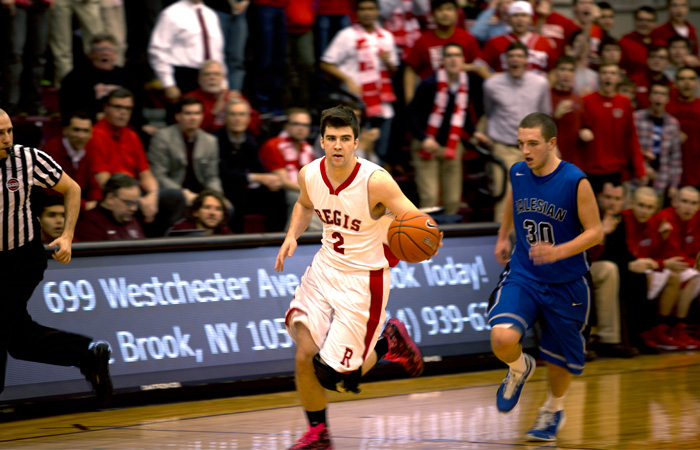 Above: Senior guard Charles Gavigan '15 brings the ball down court on a fast break. 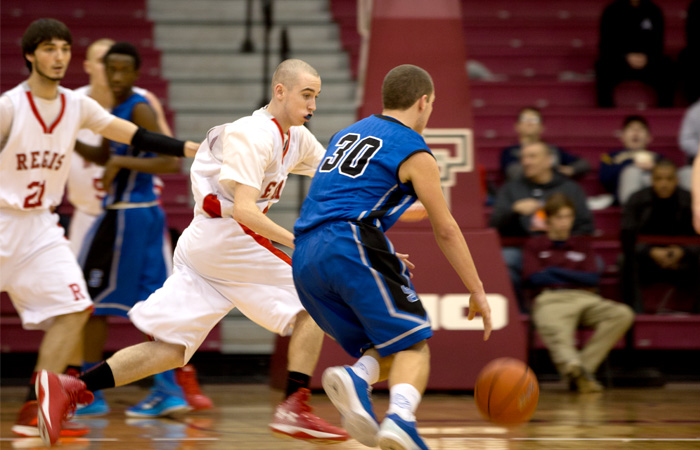 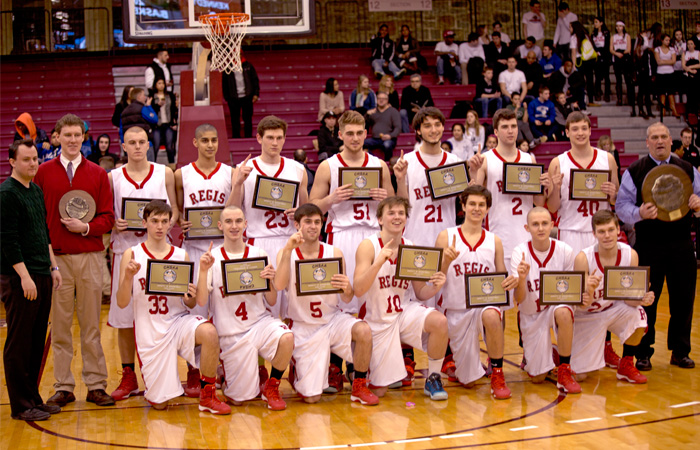 Above: The Regis Varsity Basketball team poses for a photo with their championship plaques after securing the team's second consecutive city title.