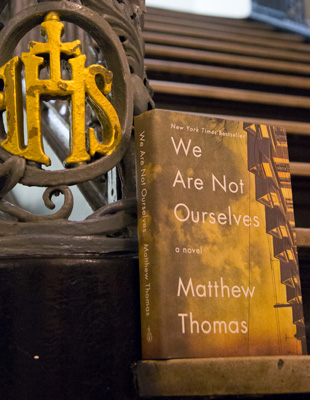 Best-selling author and Regis alum urges Regis student writers to "get out of the way of your characters."

Describes his multigenerational novel of an Irish-American family as a "Jesuit-influenced" book.

On Wednesday evening, Matthew Thomas '93 returned to Regis to present his New York Times best-selling novel We Are Not Ourselves to a large crowd of alumni and friends of Regis. His visit, though, began earlier that afternoon when he hosted an intimate discussion with current Regis students.

(Pictured: Matthew Thomas '93's debut novel We Are Not Ourselves.)

Thomas began his session with the students by reminding them of the long and proud tradition of Regis authors: Robert Giroux 31, Pete Hamill '53, Ed Conlon '83, and Phil Klay '01, to name a few. In drawing their attention to those authors, he noted that his own writing career did not take shape until he was twenty-seven. Thomas emphasized to the students that unlike other fields of study—where early success is almost essential to sustained relevance—writers "don't have to have done it yet," and that "an awful lot of failure goes into writing."

Thomas emphasized that if a writer learns to accept failure, it becomes a positive, a way of freeing oneself from the fear of failing. In a similar way, he stressed the value he places on routine. For him, that routine included the habit of producing pages every day no matter how little of the content became part of his larger work.

Similar to his evening discussion, the heart of the conversation with students took shape in the form of a question-and-answer session. Over the course of the discussion, he reflected on experiences and offered numerous bits of practical advice for young writers, including some behind-the-scenes insight to the process he encountered when writing his best-selling novel. 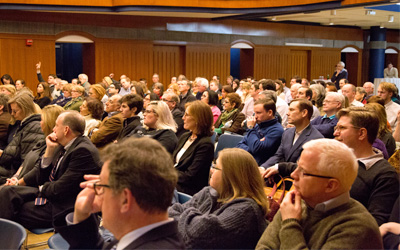 Among his remarks, Thomas reflected that the best authors learn to "get out of the way of your characters," and learn to let them take on a life and destiny of their own. He also noted that his work is a "Jesuit-influenced book" in many ways, most notably in the reason he chose to include Regis by name.

"This school would mean so much to this family in a way that no other Jesuit, Catholic, or private school could do in this time," added Thomas.

"I was struck by Matt's sincerity in speaking about the writing process and how his experience as a student and teacher in Jesuit education shaped his perspective as an author," said Kyle Mullins '05, member of Regis English Department faculty.

"He displayed a deep generosity in the way that he spoke so directly and personally to each student question."

Following the evening discussion with alumni and friends, Thomas greeted event participants and autographed copies of his novel. Video and photographs from the event are provided below.

Contributions to this article were made by Kyle Mullins '05

Below: Matthew Thomas '93 presents We Are Not Ourselves in the Regis High School auditorium 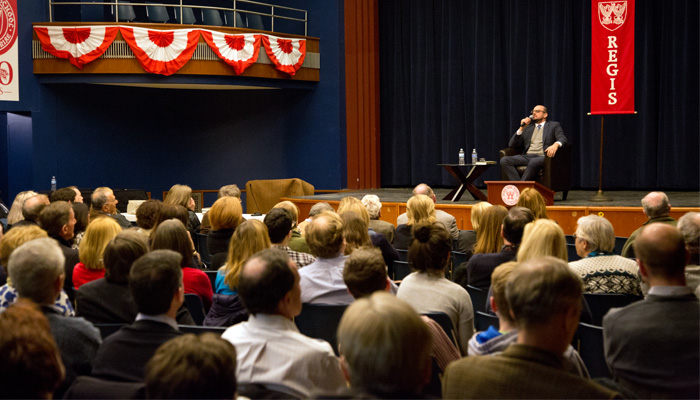 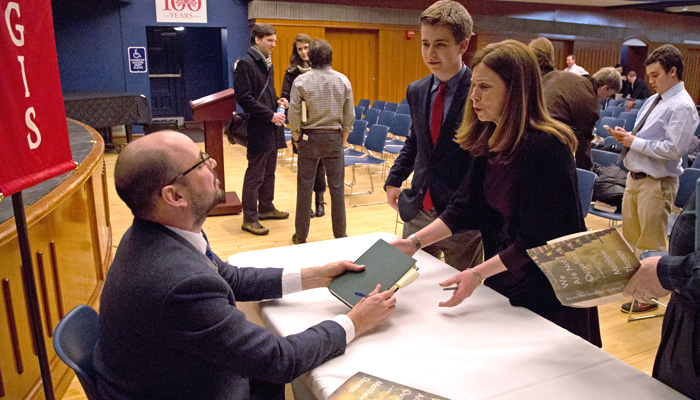 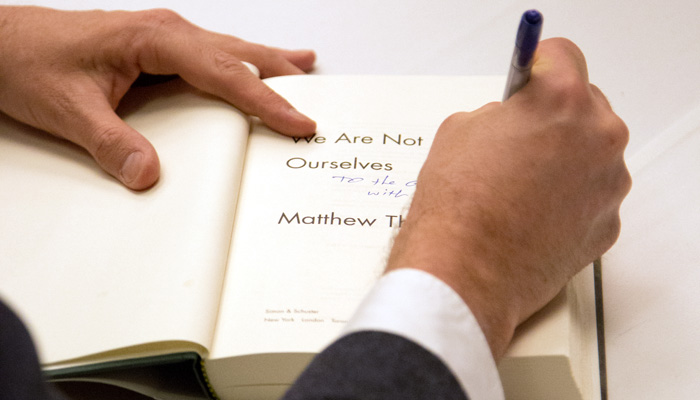