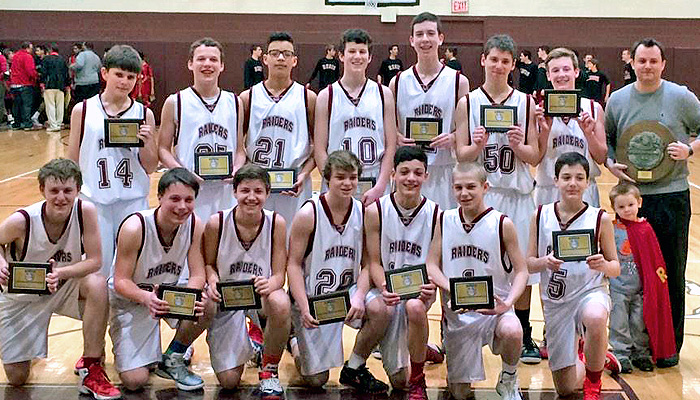 Above: The Freshman basketball team proudly displays their championship plaques after a 55-44 victory over La Salle.

The Freshman Basketball and Junior Varsity Basketball seasons concluded Sunday with both teams playing for a CHSAA B-Division City Championship. The back-to-back games, held at Fordham Preparatory, saw the freshmen finish on top while the Junior Varsity finished second in a hard-fought league battle. 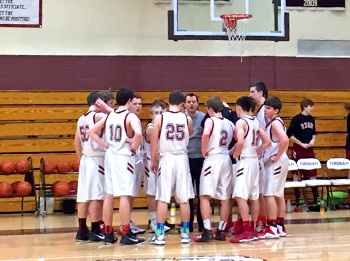 The afternoon began with the freshmen taking the court against La Salle Academy. From the opening tip, the game had an unusually quick pace. Throughout the first half the Regis freshman squad, who entered the league playoffs as the top seed, played tough and showcased solid defense. But La Salle was able to capitalize on points in the paint, earning a 29-23 halftime lead.

"We were a bit nervous since it was the championship game, but we had confidence since we had beaten them earlier in the season," said Conor Nicholson '18. "They played a 3-2 defense which we hadn't seen much of during the regular season, but we had prepared for it."

(Pictured: Coach Brian Taylor '04 huddles with the team to review strategy during a timeout.)

The fourth quarter, however, was dominated by Regis. The team came together on a 13-0 run that lasted nearly six minutes, with Regis center Ryan DeStefano playing a big role in the offensive effort.

La Salle took back some of the momentum in the final two minutes, but the Raiders stayed strong on defense and managed the clock well to secure the victory with a final score of 55-44.

"La Salle shot really well in the first half, but we stuck with them and kept it close," said Matthew Clarkin '18. "We were able to take advantage in the second half when they started missing shots, and doing so helped us earn the win."

Clarkin, who played for the 2012 New England Little League World Series team, is no stranger to playing in big games. "We were a bit nervous to be playing for the championship. But we worked hard all season so we were prepared. It was great to reach our goal."

The championship win is the second in the last three years for the Freshman team, and the second under the direction of Coach Brian Taylor '04, who has led the freshman squad since the 2009-2010 season. 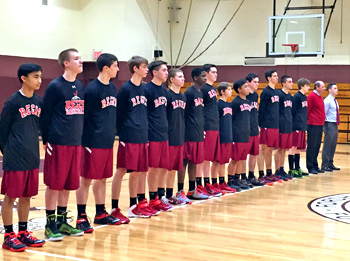 After the Freshman game, the Junior Varsity took to the court against league rival Moore Catholic.

The Raiders, who entered the tournament as the #2 seed, fell behind early. They trailed by 8 at the end of the first quarter, and the deficit swelled to 16 by halftime.

"Moore Catholic’s center had 26 first half points, so at halftime we refocused our defensive strategy on him," said Paul Castaybert '17, a sophomore forward. "We held him to two points in the third quarter, so that strategy did help us stay in the game."

(Pictured: The Regis Junior Varsity team lines up before the start of the championship game.)

With an emphasis on defense, the Raiders were able to cut into Moore Catholic's lead, and pulled within 8 points late in the fourth quarter. Ultimately, though, the top-ranked Moore Catholic squad proved too much, edging out Regis for the championship with a final score of 64-56.

Despite losing the championship, the team was proud of their efforts this season.

“This season was without a doubt the most fun I have ever had playing basketball,” said sophomore guard Jeremy Irzyk '17. "A huge thanks goes out to Coach Leonard and Coach Shanahan '77 who were spectacular leaders, and who were there for us both on and off the court."

"They put in a lot of time for games and practices," added Castaybert. "The whole team appreciates their dedication."

The 2014-2015 basketball season will conclude with the Varsity team looking to earn back-to-back city and state championships, and a chance at the federation title. The team will first have to get past their city championship semifinal game set for March 1.