On May 23, 2014, Regis announced a groundbreaking decision. After serving for ten years, making him the second longest tenured president in Regis High School’s history, Fr. Judge revealed his plans to step down from the presidency and depart the following summer. Now as the school year passes its midway point, the reality of Fr. Judge’s impending departure slowly draws nearer. Questions certainly are flying around over who will become the next president. Before we look too far into the future, it is appropriate to appreciate the tremendous effort that Fr. Judge has made towards keeping Regis a thriving, tuition-free school as it faces the next 100 years.

Recently, The Owl had the privilege of having a conversation with Fr. Judge discussing his reflections on the past ten years, his reasons for leaving, and his future plans. 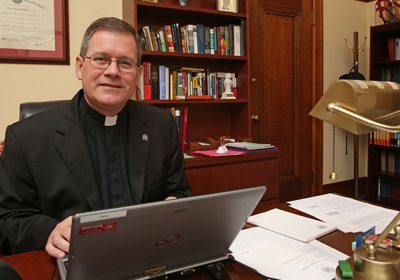 What influenced your decision to join the priesthood? When did you decide that this was something that you would like to do?

Fr. Judge: I really admired the large group of Jesuits that were here when I was a student. I appreciated the way they interacted with each other and the way they worked with us as students. I liked their commitment, and I valued that. I was a pretty religious kid when I was growing up, and it never occurred to me that you could be a priest and not just work in a parish. They showed me there is another way of doing that, and that was really attractive. I actually joined the Jesuits after I graduated from Regis.

What was it like transitioning from a student here and then into the role of president?

What exactly does the president do?

Is that why you have to go on a lot of trips throughout the year?

Fr. Judge: I go to Scranton for board meetings. I also travel to other parts of the country to meet our alumni during the year.

How difficult did you find it last year to balance the duties as president, English teacher, and also planning the centennial events?

Fr. Judge: It was a lot of work; it’s always a lot of work. We’ve been planning the anniversary celebrations for about five years before that, so it was really the end stage of a long process. And of course, the events that we had during the year made it worthwhile.

What would you say your greatest accomplishment has been as president?

Fr. Judge: Two things I guess. One was pretty visible. It was pretty neat to be the president during the 100th Anniversary of the school. It was great to be able to lead the place as we mark that milestone. Second, and although you probably would not know it all that much, given the recession and everything else, we did an awful lot of fundraising in the last ten years. We finished two capital campaigns, which is not to say that Regis doesn’t still need money; we still need it in large quantities so we hope to fix the economic imbalance and reset our funds.

Do you see Regis maintaining its status as a tuition-free school for the next 50 years?

Fr. Judge: I hope so. Our alumni are committed to that. Part of the last fundraising campaign for the centennial was adding 41 million dollars to the Regis fund to help us fund things as we go. It’s a big budget at about 12.5 million dollars a year. And a little bit less than half of that comes from the endowment, and the other half we have to raise. Our goal over time is to grow the endowed funds, so we can take a little bit of the burden off the fundraising that we have to do each year. But people are committed, we have been doing this for 100 years, I think we are going to keep on doing this for the next 100, not just the next 50.

Do you plan on staying in the state? What are your plans after you leave Regis?

Fr. Judge: Actually, I’m just moving across the street. I’ll be working for the provincial in the new province. I will be the assistant for strategic planning for him. Last April, he asked me to move to the America House, a Jesuit community on the west side, where they publish America Magazine, and I am the superior for that community.

That’s great that you’re not going too far. Do you think you will be able to stop by often?

Fr. Judge: I hope that I can stop by a lot. I am still an alumnus, so I will be back at all of the events, especially over the next few years. There are some kids that I have taught who I would like to see graduate.

Looking a little bit ahead, what would you say your goals and aspirations are for the future now that you will be in a different job? What are you hoping to accomplish there?

Fr. Judge: Well, being a Jesuit means taking a vow of obedience and what that works out to mean practically is that you trust the provincial to ask you to do what is most needed in the province. Right now, he has asked me to take on this job of planning, as the three east coast provinces gradually become one east coast province. That’s a pretty big task and it’s a pretty important one for us moving forward. How do we keep Jesuits working together? How do we assign Jesuits in the future? I hope that I will be able to do that job for him well. I hope when that’s over, he lets me come back to high school because that’s really where I like to work.

When you were talking about your decision to leave, was that really your decision or do they forcefully suggest that you should depart?

Fr. Judge: Well, we call it discernment and the way they approach it is I discern, you discern, he decides. Like I said there is a vow of obedience. I was not pressured to leave Regis at all, but I had been here ten years. I am the second longest serving president. After the centennial campaign, we’ve celebrated the 100th anniversary and completed two capital campaigns. I was thinking that it was probably time to begin turning this over. The provincial kept nodding at me telling me, “I think that is a very good idea” because he had another job in mind for me. We sort of worked it out. It was mutual.

Do you think you will have the opportunity to come back to Regis soon and teach again?

Fr. Judge: Well, you really never know. This is my third time back at Regis. First as a student, then I came back to teach, and then I came back as President. Maybe I could come back again, we’ll see.

Looking outside the scope of Regis for a minute, what are your thoughts about Pope Francis’ visit to New York next September?

Fr. Judge: I was around when Pope Benedict visited and when Pope John Paul visited. Any papal visit to a city is a really, really exciting time. I think that this pope has excited people in just amazing ways. I had the occasion to travel to Washington a week or so ago to see alumni for a board meeting, and all of the Jesuit communities are asking which community is the pope going to stop in this time because every time he travels, he goes to one of the Jesuit houses. Everyone is excited to have him come to us. He will be the first pope to speak before a joint session of Congress. I’m sure he’ll have some very interesting things to say. People want to see him, but he’s challenging us too, and its good to hear that challenge when he comes.

Do you think it’s a possibility that he could stay at your house?