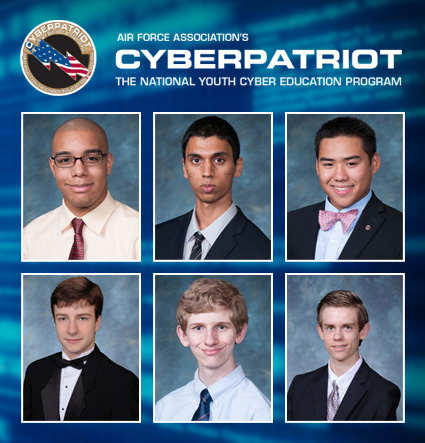 A team of students from Regis High School has placed first in the CyberPatriot Competition's New York State round. The team will now move onto the regional competition, hoping for a chance to ultimately compete in the National Finals Competition held at National Harbor, Maryland.

CyberPatriot is the National Youth Cyber Education Program which aims to inspire high school students toward careers in cybersecurity or other science, technology, engineering, and mathematics (STEM) disciplines critical to our nation's future. At the center of CyberPatriot is the National Youth Cyber Defense Competition. The competition puts teams of high school and middle school students in the position of newly hired IT professionals tasked with managing the network of a small company. In the rounds of competition, teams are given a set of virtual images that represent operating systems and are tasked with finding cybersecurity vulnerabilities within the images and hardening the system while maintaining critical services. Teams compete for the top placement within their state and region, and the top teams in the nation earn all-expenses paid trips to Washington, DC for the National Finals Competition where they can earn national recognition and scholarship money.​

The Regis High School Computer Club participates in this competition annually, which offers students a valuable glimpse into potential careers in technology. “The contest consists of several separate rounds,” said Joshua Zeitlinger, a Junior participant on the Regis team. “In rounds one and two, we are given three virtual images of a computer operating system. These images act as an independent computer, which students can open like a file in Word to interact with the computer and run the operating system. The goal of the competition is to patch numerous security vulnerabilities in provided editions of Windows Server, Vista, 7, 8, and Ubuntu. Every time a security hole is patched, the team receives points.”

The second part of the round consists of a Cisco networking quiz. Included topics cover packet tracing, layout and design of networks, IP and Mac addresses, and many more topics. “This technology forms the basis of the internet, and is extremely important,” added Zeitlinger. “Becoming Cisco certified is an important step for many professionals, and Cyber Patriot allowed its competitors to take the Cisco certification course in preparation for the quiz.”

Regis completed these two rounds on October 25 and November 15, and was proud to report a perfect score on the networking quiz. At the completion of these two rounds, the points from the images and the quiz were added for a cumulative score to determine the placing in one of three tiers. Each of these tiers (Platinum, Gold, and Silver) has a State and Regional Round. The Regis team earned the highest cumulative score ever secured by a Regis team, and that score was enough to advance to the state round at the “Gold” level.

Facing an increasing level of difficulty, the Regis team completed the State round on December 6, where they placed first in New York State. The team will next compete in the regional round, hoping for that once-in-a-lifetime chance to compete in the National Finals.