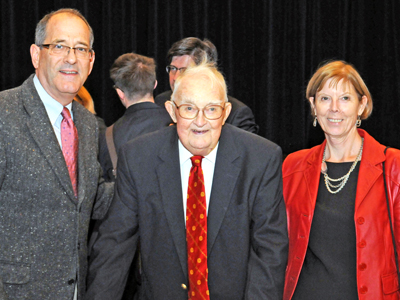 At 91 years old, John McCarthy '39 was one of only two alumni present at the Regis Centennial Gala who had graduated in the 1930’s. At the Centennial Mass the next day, he is believed to have been the oldest alum in attendance. Yesterday, just nine days after that homecoming to 84th Street, Mr. McCarthy passed away peacefully with his family by his side.

"Being present for Regis's Centennial weekend was incredibly important to him as he approached the end of his life. He had a wonderful time," said John McDermott, McCarthy’s son-in-law.

(Pictured: John McCarthy '39 † (center) with his daughter and son-in-law at the Centennial Mass reception in the Regis Auditorium on October 26)

McDermott and his wife, Betsy, attended alongside Mr. McCarthy for the weekend festivities. As a Deacon, McDermott was also invited to participate in the Mass alongside the alumni and staff priests who concelebrated.

"As a family, we have asked ourselves why this recent visit became so important to him. Looking back, Regis was the moment in his life when he discovered what type of person he wanted to become," said McDermott. "He was a committed Catholic, but at Regis he became committed to the Jesuit ideals of intellectual development and faith. At Regis he discovered languages, the arts, and intellectual pursuits. These later blossomed at Holy Cross and then in his career choice to become a foreign service officer and travel around the world."

After graduating Regis in 1939, McCarthy attended Holy Cross. He joined the U.S. Army in 1943, served in China and Japan, and became a correspondent for the Institute of Current World Affairs in Europe from 1947 to 1949. He then joined the U.S. State Department and became a foreign service officer for the U.S. Information Service for 25 years with postings in Germany, France, Lebanon, Syria, Pakistan, and Morocco. He and his wife, Helen, were married in occupied Germany in 1950, by chance, by John Courtney Murray, S.J., who just happened to be in town for the weekend.

"Rarely did I mention a major figure of that period that John had not met or encountered personally,” recalls McDermott. “Whether it was spending a day escorting Eleanor Roosevelt, having lunch with William Faulkner in Paris, [his wife] Helen helping Julia Child test recipes for her first book, or being present in Yankee Stadium as a kid when Babe Ruth pointed with his bat at the outfield and then swung hard to the left. He lived an enchanted life."

"It was at Regis that he separated his own identity from that of his family and became his own person," said McDermott. "I think that is what made Regis High School so important to him and for which he remained forever grateful."