(Above: U.S. Senator Charles Schumer addresses Regis on its 100th anniversary. Full video of event below)

At approximately 8:00 a.m. on the steps of 55 East 84th Street, Rev. Philip G. Judge, S.J. '80, President of Regis High School, welcomed a large crowd consisting of students, faculty, New York City neighbors, and local media outlets. The crowd had gathered to witness the re-dedication of Regis High School as a New York City landmark, and to symbolically "ring in" the school’s second century with the ringing of the first school bell of the day. 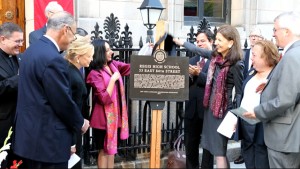 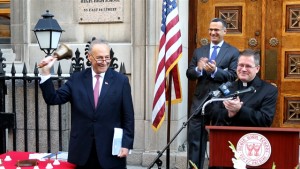 Having both a sitting U.S. Senator and U.S. Congresswoman attend the event and address the crowd highlighted the significance of the occasion, and the moment was noticeably touching for the students and faculty in attendance. (Video of the ceremony embedded below).

"The combination of opportunity and quality is what has made New York City the greatest city in the world to this day, and Regis embodies that," added the Senator. "It is so fitting and appropriate that everyone in New York City—and so many of us who represent New York City—celebrate this 100th anniversary."

"And beyond academics," the Senator continued, "Regis is a school that teaches values. Values that make students a success in life. More than that, values that instill a sense of duty to enrich  the lives of others. And that is the inestimable value of a Jesuit education. It's a holistic education. An education that nurtures the man as well as the mind. And that's the spirit of the Jesuit order."

Before concluding, the Senator added, "While we celebrate today the achievement of the 100 years past, let us look forward to the next 100 years of great Jesuit education here in New York City."

"In honor of this great achievement," stated the Congresswoman, "this resolution will be archived in the Library of Congress, and will be a lasting testament celebrating Regis High School's 100th anniversary and its many contributions educating leaders and contributors to our great city and our great nation."

Following the unveiling of the new landmarks plaque, Senator Schumer rang a commemorative school bell to represent the "first bell" of Regis High School's second century. The ceremony concluded with the student body enthusiastically singing the alma mater to the crowd of neighbors, news crews, and onlookers.

At the conclusion of the ceremony, there was just enough time for students to hurry off to morning advisement, a subtle reminder that punctuality is still a priority 100 years after the founding of Regis.

Regis was founded one century ago in 1914 by Julia Murphy Grant, the widow of Hugh J. Grant, the youngest man ever elected Mayor of New York City (1889-1892). She was also the daughter of Edward Murphy, Jr., former United States Senator from New York (1893-1899). Regis High School was designated a New York City landmark in 1969 and was added to the National Register of Historic Places by the U.S. Department of the Interior in 1980. The school’s landmark status was acknowledged at some point in time with a plaque outside the 84th Street entrance, but the plaque went missing over a quarter of a century ago. The historic first day of the second century presented an appropriate opportunity to commission the production of a new plaque to acknowledge, as the plaque itself states, "one of the most dignified school buildings in the city."

Since its founding, Regis has played a vital role in the social and educational history of New York. The school has remained the only tuition-free Catholic secondary school in the United States, offering Jesuit college preparatory education to Roman Catholic young men from the New York metropolitan area who demonstrate superior intellectual and leadership potential. In the admissions process, special consideration is given to those who cannot otherwise afford a Catholic education. 32% of enrolled students are members of minority groups and 40% are the sons of immigrants.

Regis has not just survived these 100 years: it is thriving. At a time when the status and future of education in New York has never been more intensely debated, this morning’s ceremony presents both the Regis community and surrounding neighborhood an opportunity to reflect on the unique and unparalleled contribution Regis has made by providing 100 years of tuition-free education in the spirit of traditional Ignatian values.