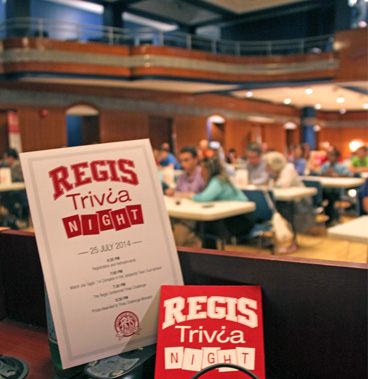 The Founding Family. The landmark Regis building. Famous alumni and faculty. These were just some of the topics covered Friday evening at the Regis Centennial Trivia Night. The event challenged students and alumni—young and old—to come out and test their knowledge of 100 years of Regis history.

Regis's game-show-like Trivia Challenge appropriately took place following the live viewing of Joe Taglic '14's appearance on the Jeopardy! Teen Tournament (Read more: Wild Night for Joe Taglic '14 as he Qualifies for the Jeopardy! Teen Tournament Semifinals | July 26, 2014). The celebratory atmosphere following Taglic's Jeopardy! success, coupled with the intrigue of Regis trivia, was enough to entice most of the crowd to participate, while others enjoyed watching from the sidelines.

Approximately 20 teams—averaging 3 to 5 players—found a team table, grabbed a scorecard, and prepared for the quiz challenge. Mr. Frank Barona, chair of the Science Department and moderator of the Regis Quiz Bowl Team, volunteered as emcee for the event.

Teams answered a series of five questions from five different categories, and a sixth bonus round allowed teams a final opportunity to earn extra points. The event sparked some great competition and, while all teams remained competitive, those that combined older alumni with younger alumni or students appeared to gain an edge.

When the last question was read and the points were totaled, the team named "Somewhere in the Middle" eked out the victory. The team consisted of Joe Pozzuoli '71, Jim Donohue '90, John Balletta '12, and Warren Thimothe '14. Each team member received a marble resin replica statue of the original Regis Owl, a prize worthy of their impressive combined knowledge of Regis history.

"It was great fun," said Jim Donahue '90, a member of the winning team. "There were many questions that appealed to a broad range of alumni. It was well thought out. We were certainly impressed with some of the connections made between Regis and the world of politics, entertainment, and sports. It makes you proud to be part of a school with such an amazing network of alumni."

Also in attendance was Henry Ricardo '60 and his wife, Catherine. Ricardo competed on an episode of Jeopardy! in 1992, and was thrilled to come out to support another Regian on Jeopardy! before the trivia night began.

"My ability to compete on Jeopardy! was certainly enhanced because of my Regis experience," said Ricardo. "Regis sparked a life-long interest in reading, Latin, and Greek, among other subjects."

The Ricardo's, whose son Henry is a 1985 graduate and whose grandson Tomas will be a member of the incoming freshmen class, were happy to return to Regis for the event, as they first met while Henry was a student at Regis. "In fact," said Ricardo, "we went to the Regis prom together right here in the Regis auditorium all those years ago."

The trivia event also captivated some of the youngest members of the Regis family, specifically those that will be arriving at Regis in the fall for the start of their freshmen year. Jack Parsons '18 even spent some time researching Regis history prior to the event.

"I read as many facts as I could on the Regis website and the Regis Wikipedia entry," said Parsons. "I wanted to come out to support Joe in the Jeopardy! tournament, and the trivia challenge also seemed like a great opportunity to learn more about Regis history." 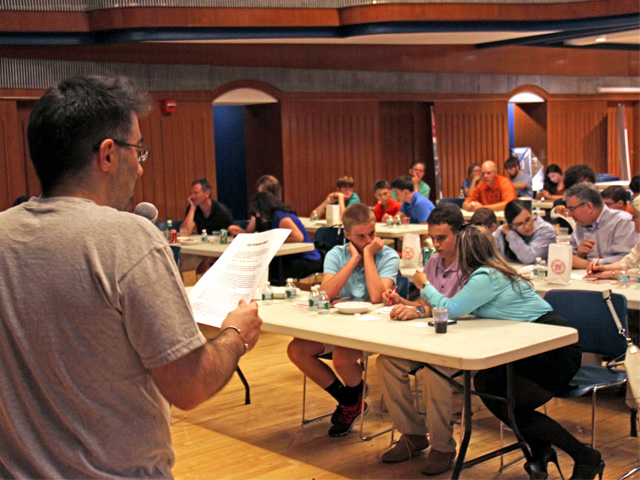 Above: Teams debate the answer to a trivia question as faculty member Mr. Frank Barona, who served as the evening's emcee, reads a clue. 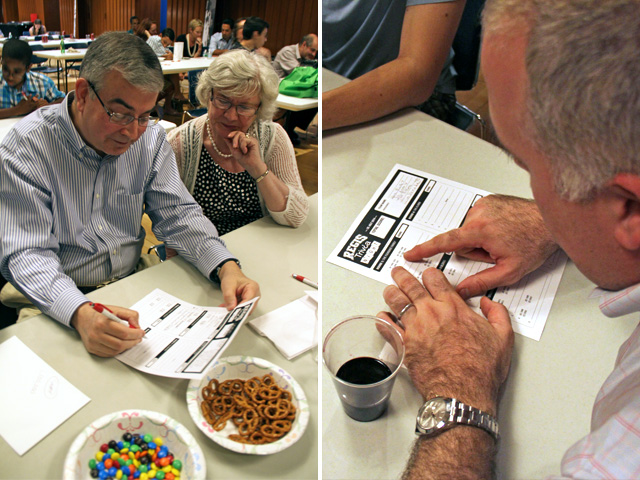 Above Left: Catherine and Henry Ricardo '60 contemplate the answer to a Centennial trivia question in the same room where they attended the Regis Prom together 54 years ago.

Above Right: Jim Donahue '90 helps guide the younger alumni on his team regarding a question about the early years of Regis. 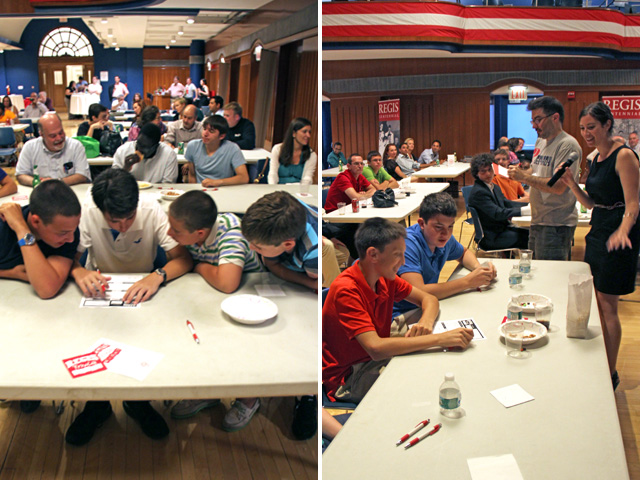