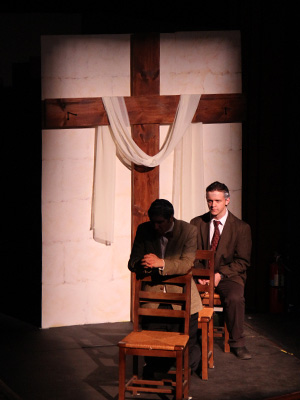 Alumni joined students, parents, and friends in the Regis Auditorium on May 3rd to attend a Centennial year performance of Child's Play. The Tony Award winning play was chosen as this year’s production because it was written by Regis alumus and former Regis faculty member Robert Marasco '54.

Child's Play takes place at the fictional St. Charles, an exclusive all-boys Roman Catholic boarding school and was loosely based on Marasco's time at Regis as both a student and faculty member. The story centers on the rivalry between two faculty members—easy-going English teacher Joe Dobbs and the much feared Latin and Greek teacher Jerome Malley.

The Regis Repertory's production of Child's Play was directed by Andre Anselme. Anselme, now in his 30th year as a member of the Regis History Department's faculty, was up for the challenge of orchestrating such a demanding show.

"This was the most difficult of the five plays I have directed because of the significance of the play to the school and, more importantly, because of the type of play it is," said Anselme. "The plot is found mostly in character development and the dialogue among the characters. The thrust of our many weeks of rehearsals was focused on the evolution or devolution of the principal characters."

Regarding the play's significance, Anselme added, "It was a commentary on the 1960's and the beginning of the 'counter-culture' movement in that it questions traditional values, especially the sanctity of priestly vows. That made the acting more significant, in one sense, than the story itself. On that score, the entire cast captured their characters extremely accurately and nailed it!"

In attendance at the matinee performance was a contingent of members from the class of 1966 including Jim Periconi, Dave Flanagan, Will Arnone, John Van Name, and John "Lash" LaRuffa.

"Marasco taught us all," said LaRuffa. "he was a wonderful person and a great teacher, fun and young like one of us. He was writing the play when we were students. This was a wonderful performance choice to honor Regis during this year of Centennial celebrations."

Periconi, who had Marasco as his Latin teacher, remembers when the play first opened on Broadway in 1970. "I was a senior at Columbia, and I reviewed the play for the Columbia Daily Spectator. This play was the Broadway melodrama hit of its time." (Read more: A Review of Child’s Play by James Periconi | The Columbia Daily Spectator, 18 February 1970).

Also in attendance was Brian Devaney '97 and his wife, Crystol. As a student, Devany was very involved in The Regis Repertory, serving as a director of performances in his Junior and Senior years.

"The performance given by the actors today was incredible, it was hard to believe these were high school students putting on such a memorable dramatic show," Devaney said. "The transformation of the Paul Reese character during the course of the show revealed an amazing depth of performance by the actor."

Devaney added, "In Regis's Centennial Year it is wonderful to know that the performance put on by Regis Repertory is a show written by a Regian, truly a unique show for a special year." 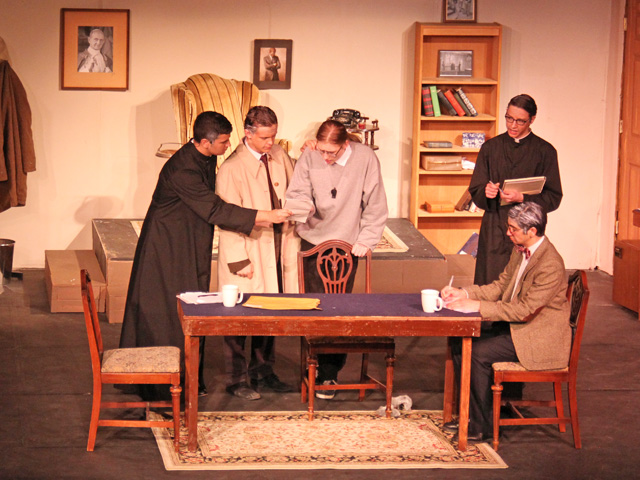 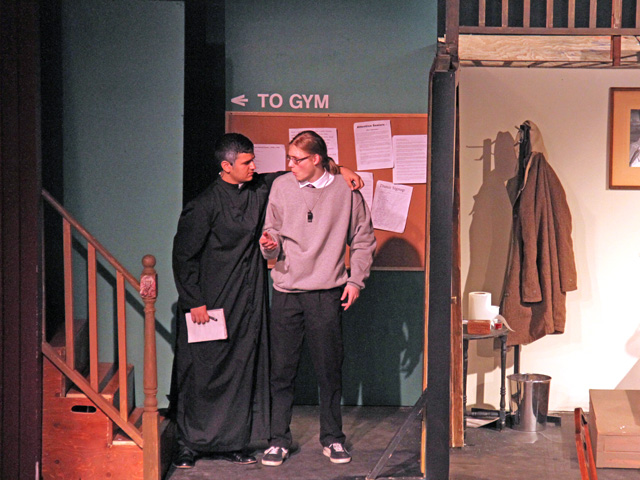 Above:  Fr. William Griffin (Sebastian Dilones '14) has a talk with Mr. Paul Reese (Peter Wrobleski '15) in a scene that takes place in the hallway outside the Faculty Room. 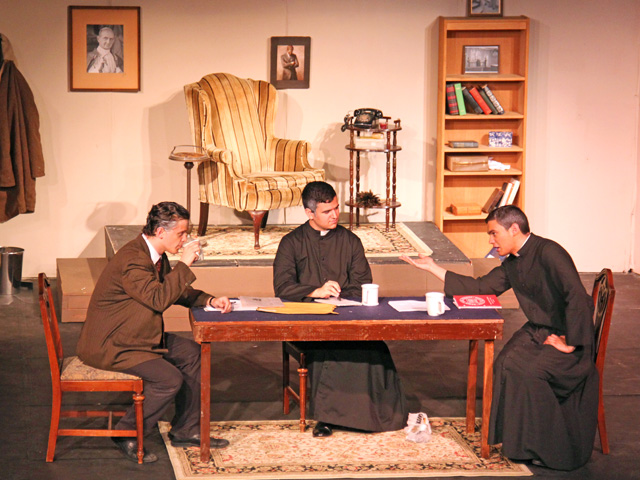