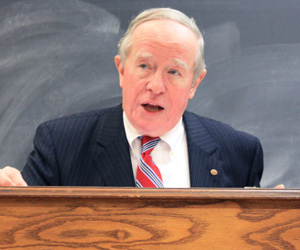 Mr. John Connelly '56, long-time History teacher and member of the Regis faculty, has announced that he will retire at the end of the 2013-2014 academic year.

Mr. Connelly's relationship with Regis began in the fall of 1952 when, as a Freshmen, he first entered the Regis tunnel (known then as "the Arcade"). After graduating in 1956, Connelly found himself back at Regis in the fall of 1960 as a first-year faculty member. He departed for the 1963-1964 academic year for additional graduate studies, having already received his B.A. from Holy Cross College and his M.A. from Fordham University. He returned to the Regis faculty in September 1964.

Mr. Connelly's tenure on the faculty would endure for over half a century, making him the longest serving faculty member in the history of Regis High School. In a year in which we celebrate our Centennial, it is worth noting that John Connelly has educated students from more than half of the graduating classes of Regis High School.

The school plans to honor Mr. Connelly at an assembly with students and faculty before the year ends. Along with all Regians, we salute the gifts and talents Mr. Connelly has shared with multiple generations of students and we thank him for his long-standing dedication to Regis.