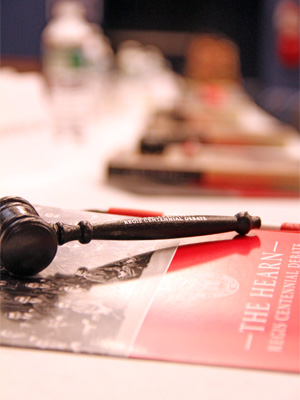 On Tuesday, April 15 over 400 students, alumni, and friends of Regis packed the auditorium for The 2014 Hearn Centennial Debate. Two-person affirmative and negative teams debated the resolution: "American Political Discourse No Longer Serves the Public Interest."

Beyond the appeal of witnessing a serious, intellectual debate, guests participated in an event that honored the tradition of debate at Regis, where debate has remained one of the school's principal student activities for almost 100 years.

As we have come to expect at Centennial events, the weather played an important role in this debate. Heavy rain and dangerous winds in Boston grounded Alexander Blenkinsopp '01, who was slated to be one of the debaters on the affirmative team. In his place, Regis debate coach Eric DiMichele—who meticulously coordinated the debate participants and judges panel—made a "call to the bullpen" and recruited another seasoned Regis debater to fill in for Blenkinsopp.

(Pictured: A commemorative Regis gavel and event program awaited each of the 11 Centennial debate judges)

In the entertaining fashion one expects from DiMichele, the hiccup of a missing debater was resolved quickly and amusingly.

After a sustained standing ovation, DiMichele informed the audience of the missing debater and staged an "auction" for the final debate spot. After attempting to persuade various alumni and students in the audience to join the other three debaters on the stage, Paul Held '90 raised his hand and gave a "Sure, I’ll try it!" shout from the back of the audience. 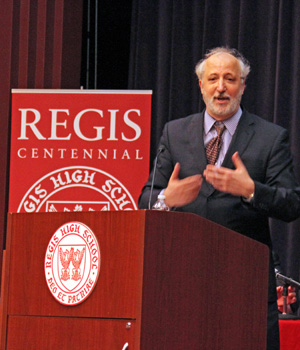 "There’s only one person I know who could have jumped in and offered the same level of excellence, and that's Paul," DiMichele said to the audience.

A seasoned extemporaneous speaker, Held graduated from Williams College and worked in investment banking early in his career. He went on to receive a PhD in politics from the University of California, where he taught for 8 years. While there, he also headed a think-tank named The Center for Rethinking Capitalism. He currently serves as an advisor to the Glenn Family Foundation.

As DiMichele quipped, Held is one of the best extemporaneous speakers in the United States, and "that will be proven tonight."

View Video: Watch the introduction of the Hearn Centennial Debate here, including the described "auction" in which Held volunteers to join the debate.

Held joined David Kennedy '89P'16 on the affirmative team. Held and Kennedy were no strangers, having attended Regis in the same time period. In fact, in 1989 Kennedy, then a senior, debated Held, then a junior, at Regis High School’s Diamond Anniversary Hearn Debate.

As a Harvard undergraduate, Kennedy excelled in Parliamentary Debate, winning the 1992 National Championship with one teammate, and the 1993 World Championships with another. He also served as a senior editor on Harvard’s liberal journal, and was elected to the Harvard Lampoon, for which he was a writer, issue editor, and cook. Following one year in Seoul, South Korea, he went to Yale Law School, where he was an Executive Editor of the Yale Law Journal. After clerking for judges on the Southern District of New York and the U.S. Court of Appeals for the Second Circuit, David became an Assistant U.S. Attorney in the Southern District of New York. Now Chief of that office’s Civil Rights Unit, Kennedy brings lawsuits to enforce among others disability, fair housing, and voting rights laws.

Held and Kennedy were opposed by a team of young alumni, Michael Barton '10 and David Denton '03. Barton is a senior at Yale University where he will graduate this May with a double major in Economics and Political Science, though his primary passion remains debating. He has served as the President of the Yale Debate Association and was the top speaker at the North American Championships in 2014, a finalist at the Cambridge Inter-Varsity, and a semi-finalist at the World Championship. He is currently a member of the both the 2nd and 3rd Place “Team of the Year” for the American Parliamentary Debate Association. After graduation, Mike will begin work as an analyst at an investment bank in New York.

Barton's debate partner, David Denton, also attended Yale, where he was half of the first American team ever to win the Oxford Union’s annual tournament, a finalist at the 2006 World Championships, and the 2007 APDA National Champion. Denton received his law degree from Harvard, where he was an Executive Editor of the law review and was named Best Oralist in the final round of the 100th Ames Moot Court competition by Chief Justice John Roberts. After clerking on the Court of Appeals in Virginia, he clerked for Justice Anthony Kennedy at the Supreme Court. David now works for a law firm in Houston.

(Story continues below the video)

After introductions, the two teams jumped right into the spirit of the event in what proved to be a highly entertaining, academic, informative, and—at many moments—humorous debate. The debate itself was a hybrid of "Public Forum" and "Parliamentary" debate formats.

At the event’s conclusion, guests were invited to attend a reception hosted in the Regis cafeteria. Embedded below is the video recording of the debate, broken into the appropriate sessions. Following those videos are some photographs documenting the event. 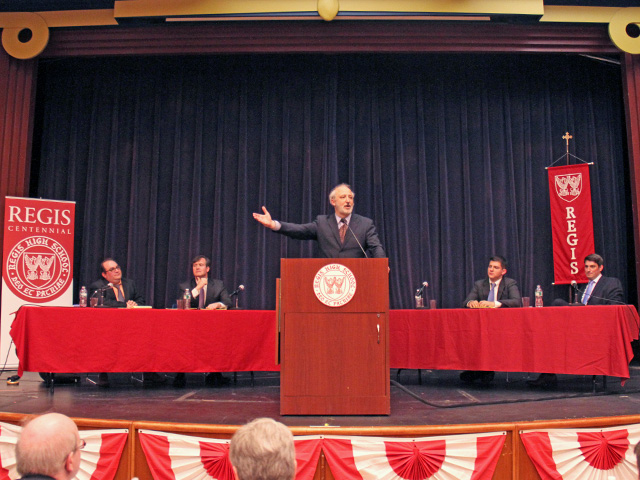 Above: Eric Di Michele, Director of Regis Admissions and longtime Coach of the Hearn, introduces the Regis Centennial Debate participants and judges. 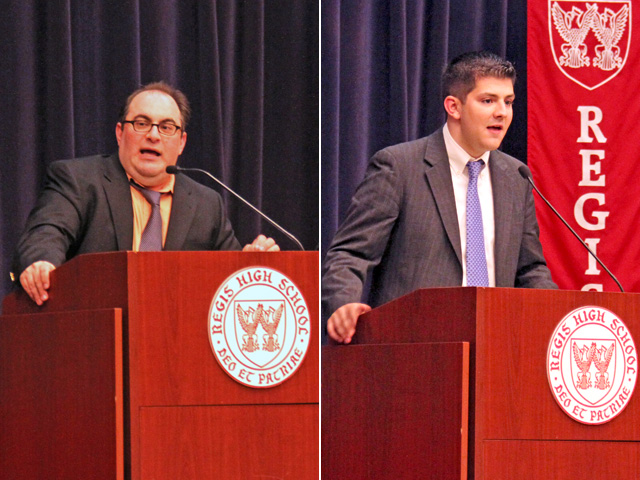 Above: Paul Held '90 and Michael Barton '10 at the Hearn Centennial Debate. 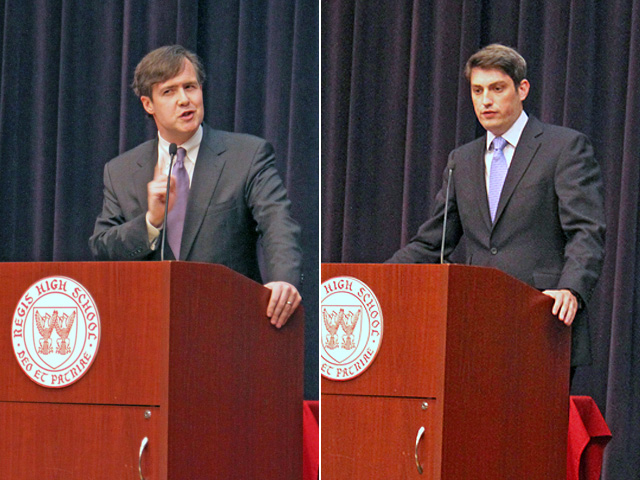 Above: David Kennedy '89P'16 and David Denton '03 at the Hearn Centennial Debate. 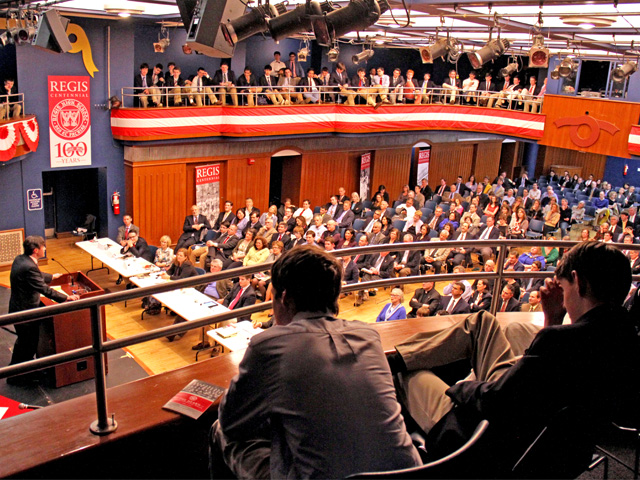 Above: Current Regians packed the balcony and intently listened to the alumni debaters. 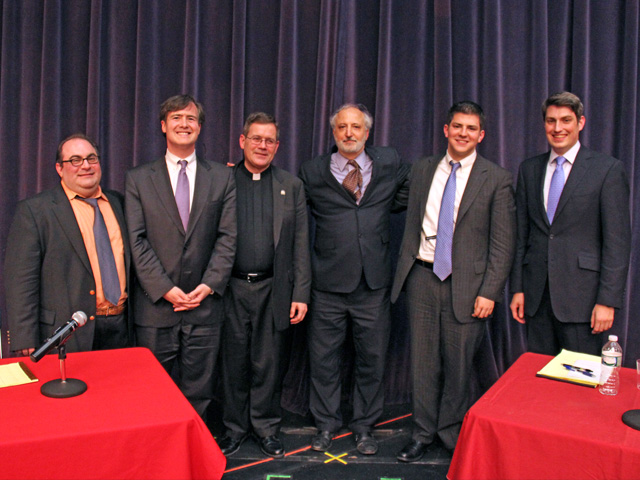 Above: The debate participants pose for a photo with Rev. Philip G. Judge, S.J. '80 and Debate Coach Eric DiMichele.