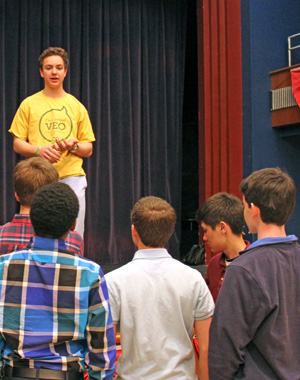 The St. Baldrick's Foundation is a volunteer-driven charity committed to funding the most promising research to find cures for childhood cancers and give survivors long, healthy lives. Because children with cancer often lose their hair during treatment, "shavees" for the St. Baldrick's Foundation show their support by shaving their heads voluntarily, with the hope of inspiring friends and family to donate money to support childhood cancer research.

(Pictured: Jack Aiello '16 addresses Regians at the kick-off of the St. Baldrick's head-shaving event at Regis)

Participating in the Foundation's work has been a part of Aiello's life for quite some time. The founders of SBF are from his home town (Northport, NY), and he has been participating in events hosted by the foundation since elementary school.

"In the fourth grade, the impact of Saint Baldrick's on me changed forever when one of my closest friends was diagnosed with leukemia," said Aiello. "So many members of our community were pained to see our friend, classmate, and neighbor go through such a grueling battle with cancer. Childhood cancer brought with it some of the worst, most challenging times to my friend and her family and as I witnessed that, I promised myself to make a difference in preventing those experiences for any other child."

Aiello's friend underwent over a year of intensive chemotherapy and other demanding treatments, ultimately triumphing over her individual battle with cancer.

Today, St. Baldrick's Foundation is a leading contributor to childhood cancer research. But just as important as the money which Saint Baldrick's raises, says Aiello, is the symbol of unity and solidarity which a shaved head brings. "Children who are diagnosed with cancer don't have a choice if they want to keep their hair, so sacrificing our hair lets them know that we are fighting this struggle together," said Aiello.

Though this was the first time a St. Baldrick's event was held at Regis, it was not the first time Regians participated in one of the charity's fundraisers. Back in March, a separate group of Regis students participated in a head-shaving event hosted by NetApp. Bill Hogan '85 P'15, a Vice President and General Manager at NetApp, was influential in recruiting Regians to participate in the event. His son, Liam, a junior at Regis and a captain of the Varsity Basketball team, spread the word to teammates and classmates, encouraging them to participate.

"This was the eighth time I have shaved my head at an event," said Hogan. "This time around we had about 16 classmates shave their heads, raising upwards of $35,000. Justin Tuck of the New York Giants attended the event and even arm wrestled Mike Cerone '15. We had a great time."

Hogan was "knighted" by St. Baldrick's earlier this year for his eight years of service, having helped raise over $100,000 for St. Baldrick's over the course of those eight years. He was one of 17 Regians who joined St. Baldrick's Co-Founder John Bender at the NASDAQ for the Closing Bell Ceremony on March 7.

For Aiello, bringing this event to Regis was an important step in his personal campaign against childhood cancer. "Bringing this mission and message to the Regis community has been something I wanted to do before even starting classes at Regis, so this first event has been a big step towards that goal. The Regis community is an extremely loving, generous, and selfless group of people and I love working with them to end the tragedy of childhood cancer."

After sitting as the first Regian to have his head shaved on the Regis auditorium stage, Aiello remarked, "Getting shaved again felt great because of all the good that a bald head brings to a suffering child, but having that happen at Regis made it all the better." 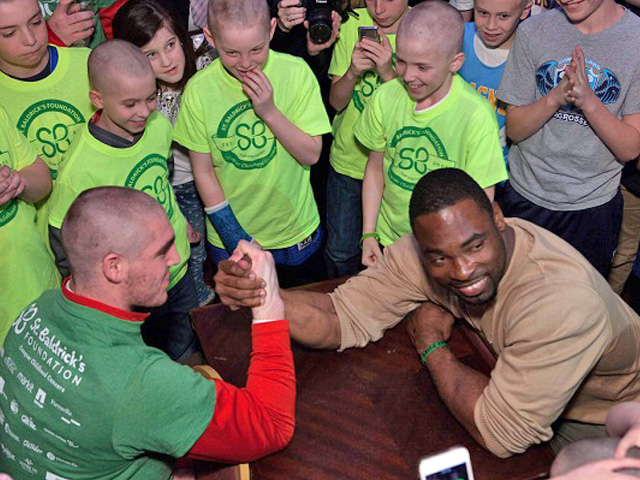 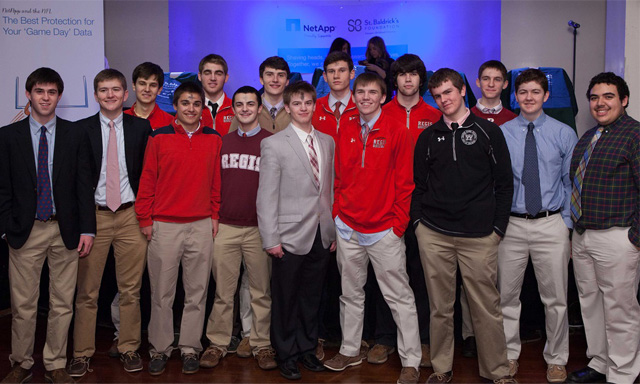 Above: Prior to shaving their heads at the St. Baldrick's head-shaving event hosted by NetApp on March 11, the participating Regis students posed for one last photo with their hair. Photo courtesy stbaldricks.org. 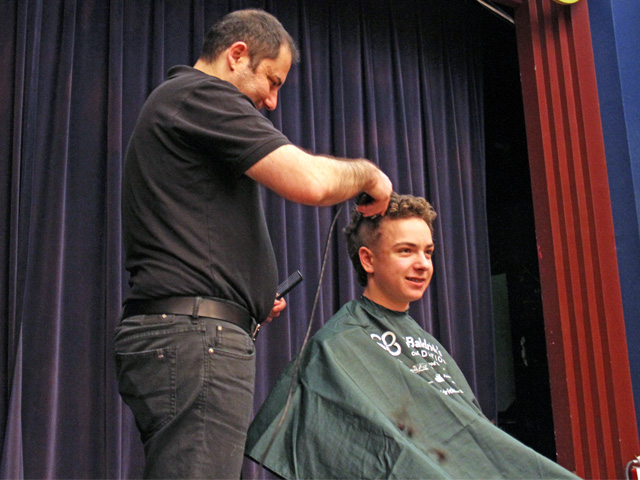 Above: At the St. Baldrick's fundraiser held at Regis, Jack Aiello '16 was the first Regian to have his head shaved on the auditorium stage. 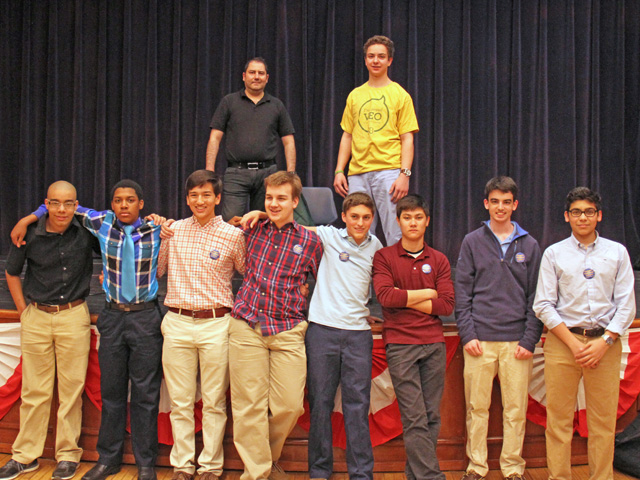 Above: Regis students participating in the April 11 head-shaving event in the Regis auditorium pose for a photo with a volunteer neighborhood barber before the shaving began.