Calendar
Events
Shop
Auction
Employment
Directory
Contact
myRegis
A Timeline of The 100th Day Turn Back the Clock Celebration
Below is a summary of the events that transpired leading up to and during Thursday, April 10, 2014: The 100th day of the 100th year of Regis High School. Thanks to all who participated!

Monday, April 7: All alumni, students, faculty, staff, family, and friends of Regis were notified of the upcoming "turn back the clock to 1964" celebration scheduled for Thursday, April 10, the 100th day of the 100th year of Regis High School. Students and staff were briefed on the throwback rules and scheduled events.

Alumni and friends were encouraged to follow Regis throughout the day on social media, and asked to consider making a gift to commemorate the celebration. Gift options of $20.14 and $100 were encouraged, with any gift of $100 or more qualifying the donor to receive a unique commemorative lapel pin. The unique giving opportunity was scheduled to begin at midnight on April 9th and close at midnight on April 10th.

At midnight, the Regis.org website was transformed into a design showcasing how it might have appeared in 1964, had websites been around back then. Photographs and actual news stories from 1964 filled the homepage.  If you missed it, you can still click here to view the site. 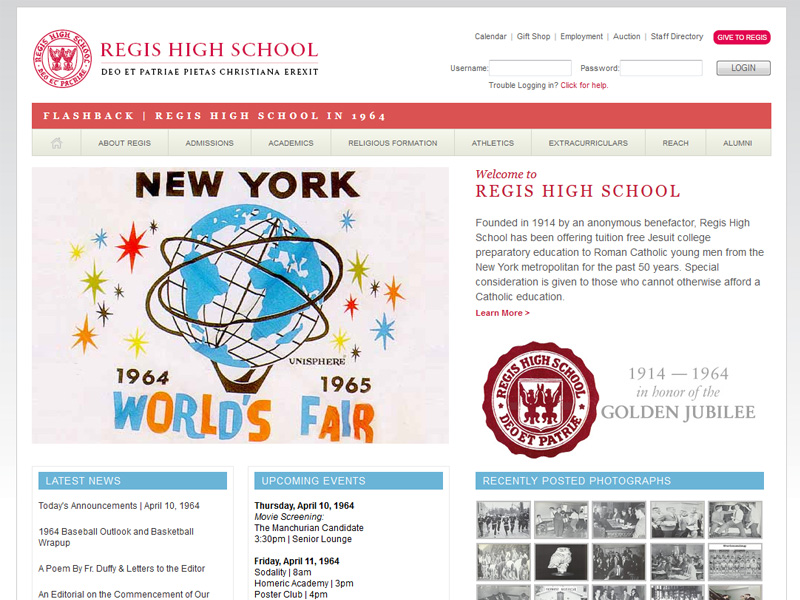 At 7 a.m., a whimsical list of April 10, 1964 announcements headlined the Regis website's news feed. The announcements were read to students just a short time later during morning advisement. Click here to read the full listing.

At 8 a.m., Rev. Arthur Bender, S.J. '67, who was a freshman in Advisement 1A back in 1964, opened the Regis chapel to students and faculty to celebrate a mass in Latin. "The mass offered was an enriching experience and one that I think all young Catholics should participate in at least once," said Senior Donal Mahoney '14. "The Regians in the chapel this morning gained an important perspective that I think will stick with them for the rest of their lives." 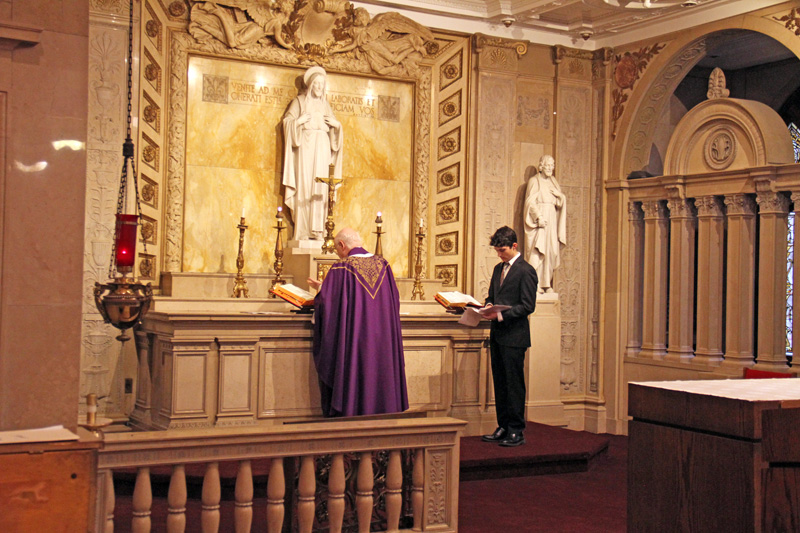 After a brief early morning advisement at 8:40 a.m., All students gathered in the Regis auditorium for a very special Centennial themed assembly. Mr. Brad Serton, Dean of Students, briefed the entire student body and faculty on the day's rules of conduct. He then introduced Fr. Anthony Andreassi C.O. 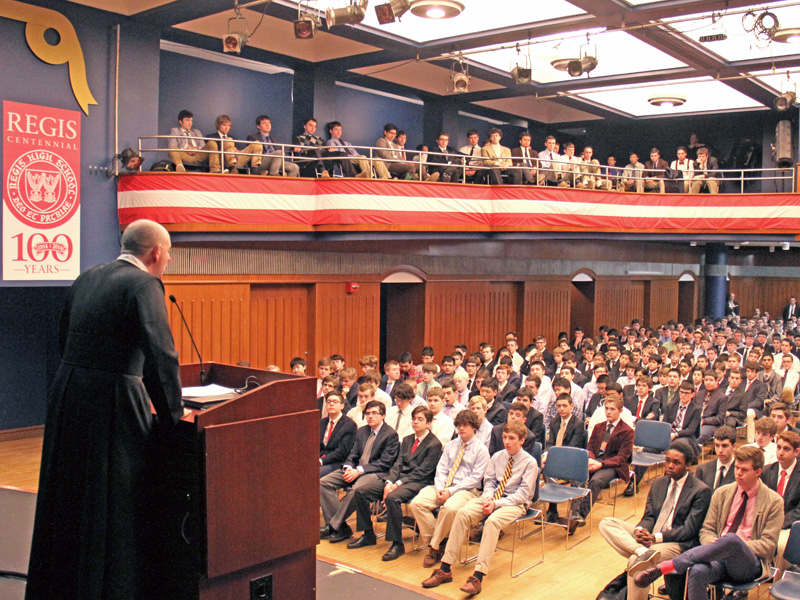 Fr. Andreassi addressed the students on the significance of the day. "As we all dress and observe other school customs and rules as students and teachers would have done fifty years ago, I would like to propose that we are actually doing something far more significant than just having a bit of fun walking down memory lane.  In doing all this, I believe that we are actually doing something with some spiritual significance.  Just as when we celebrate the Eucharist to remember and give thanks for the gift of Christ of Himself to us, in remembering all that has gone before us—before you—in the founding of Regis High School, we cannot but also feel the need to give thanks: thanks for all the incredible generosity of the foundress and her family in 1914 in establishing this school; thanks for so many alumni and friends in keeping their Mrs Grant’s and Fr Hearn’s vision alive; and thanks for the many Jesuits and lay teachers who have taught and given of themselves to generations of young men. So I invite you to keep this all in mind as we all have some fun today:  that in remembering the past today, you are also expressing your gratitude to God for the present as well as reminding yourselves of the central mission of a  Jesuit and a Regis education: to form generous men rooted in Christ, men for others."

After two brief but incredibly entertaining anecdotes on the students of Regis past (who better to tell these stories than the author of the most comprehensive book on Regis history) Fr. Andreassi invited Rev. Philip G. Judge, S.J. '80, President of Regis High School, onto the stage to lead the entire student body in a rousing rendition of the alma mater. As punctual as 1964 would have required, the assembly concluded with just enough time for students to hurry to their first period classes.

At 9:10 a.m., the start of the first period of the day, the Senior Room officially opened. This retro lounge, recreated in the Second Floor Conference Room for this one special day, featured a ping pong table, card games, and plenty of snacks, including an antique-style pop-corn machine popping fresh popcorn. Classic tunes from the early 1960's played over the room's speakers and added an additional 60's feel. 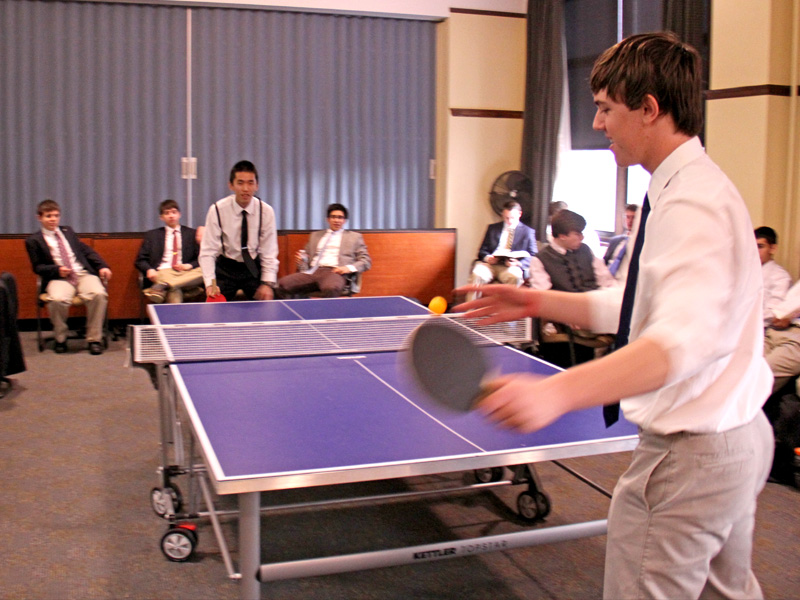 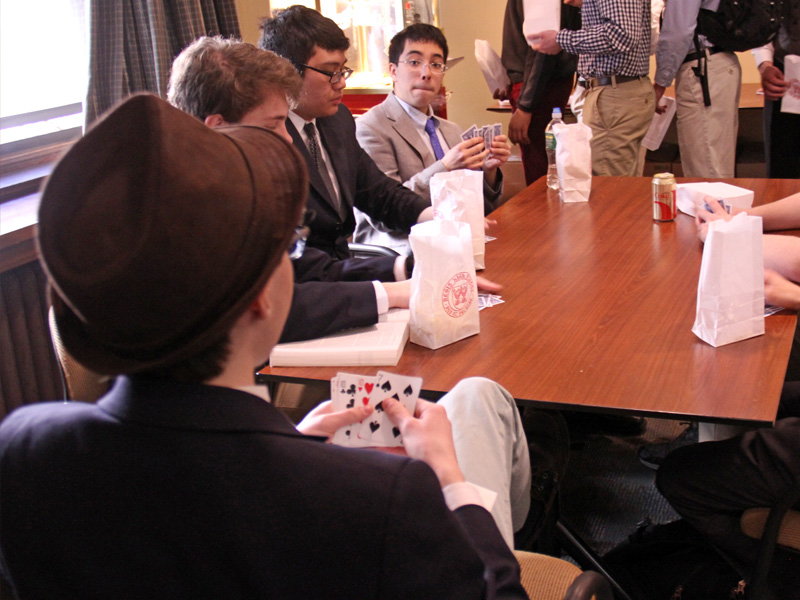 During the lunch periods, the cafeteria staff served a classic dish of meatloaf, mashed potatoes, and glazed carrots. A poster board was hung on the cafeteria wall encouraging students to suggest items to include in a time capsule to represent the life of a student in 2014. Another poster board asked students to speculate what life will be like for a Regian in 2064, the year that will mark the 150th Anniversary of Regis. 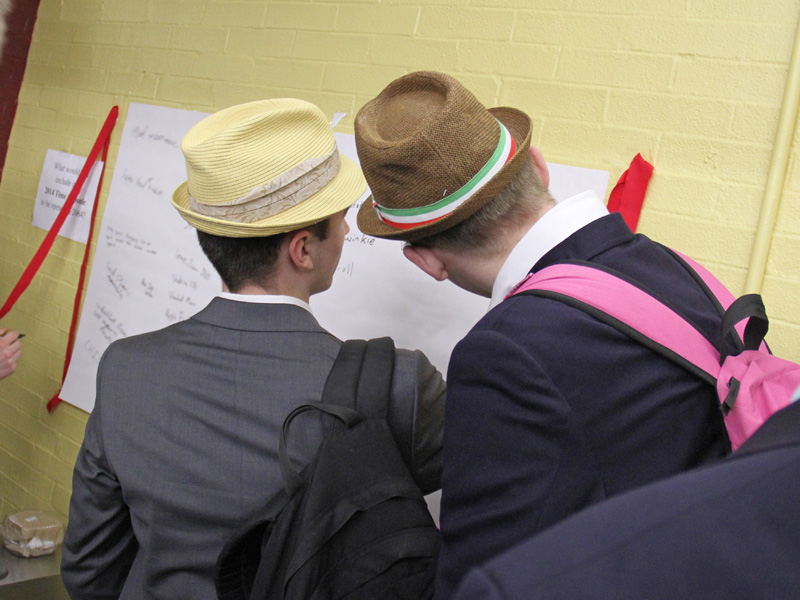 The collective school administration had a great time following the dress code rules of 1964. Faculty wore robes, priests wore cassocks, and administrative staff looked like characters straight out of an episode of Mad Men. (Story continues below the collection of faculty and staff photos.) 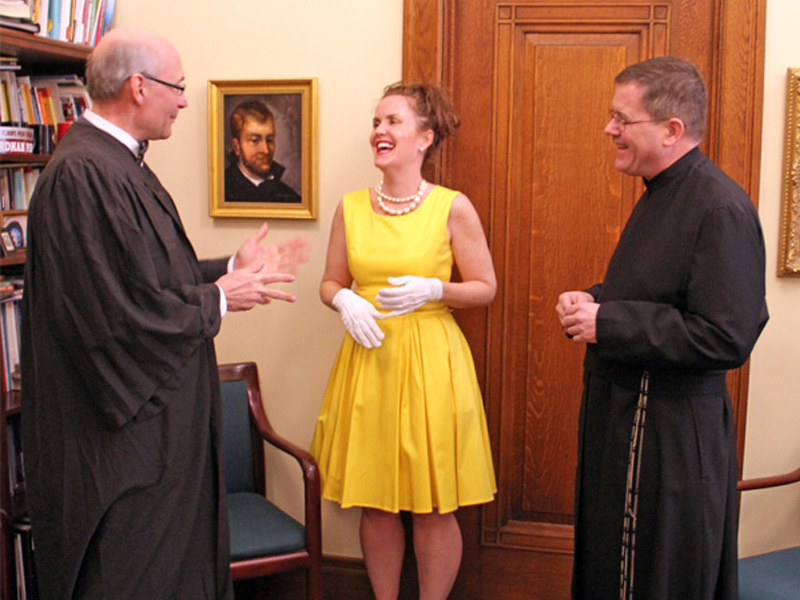 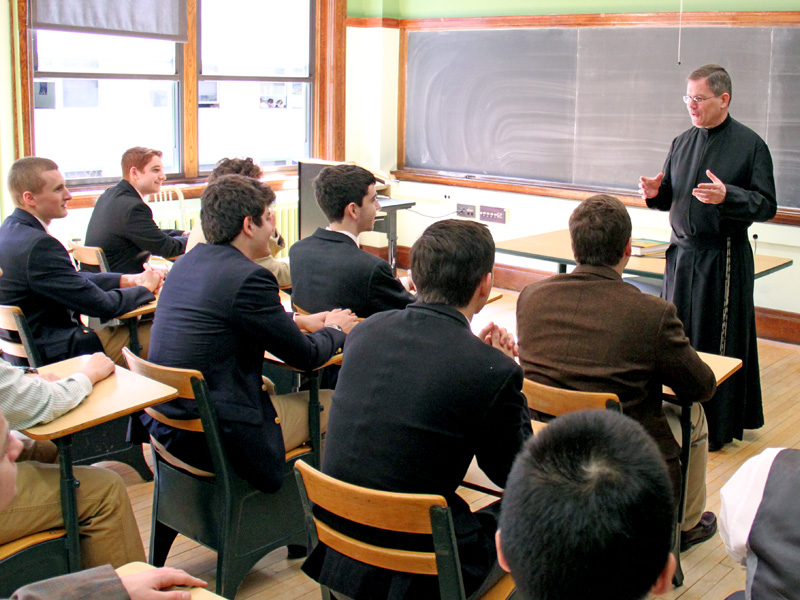 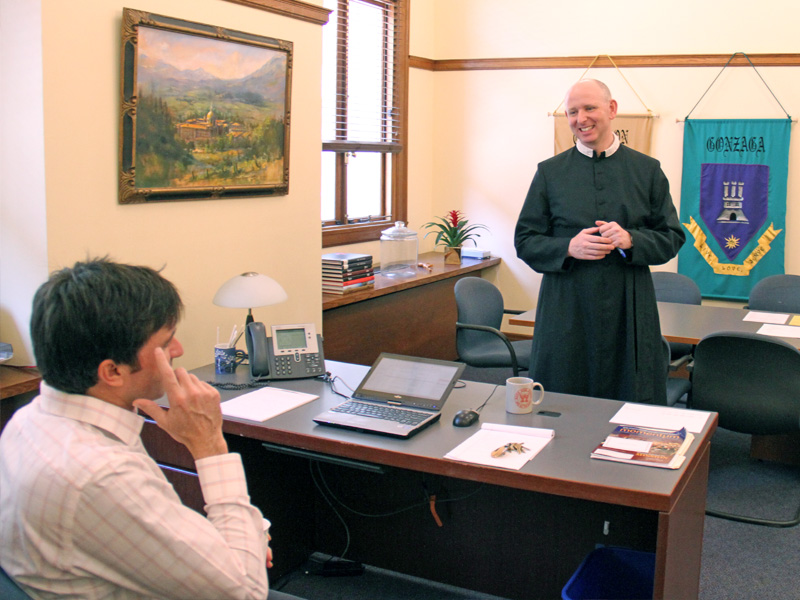 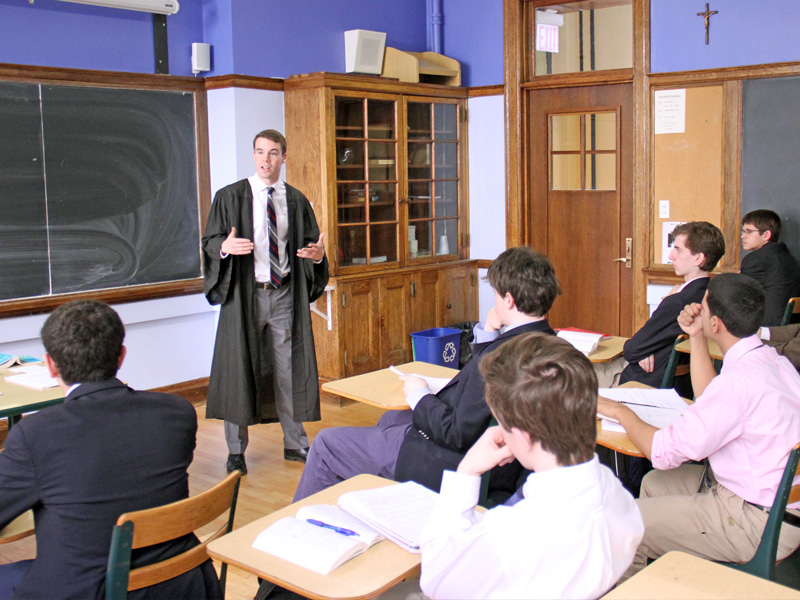 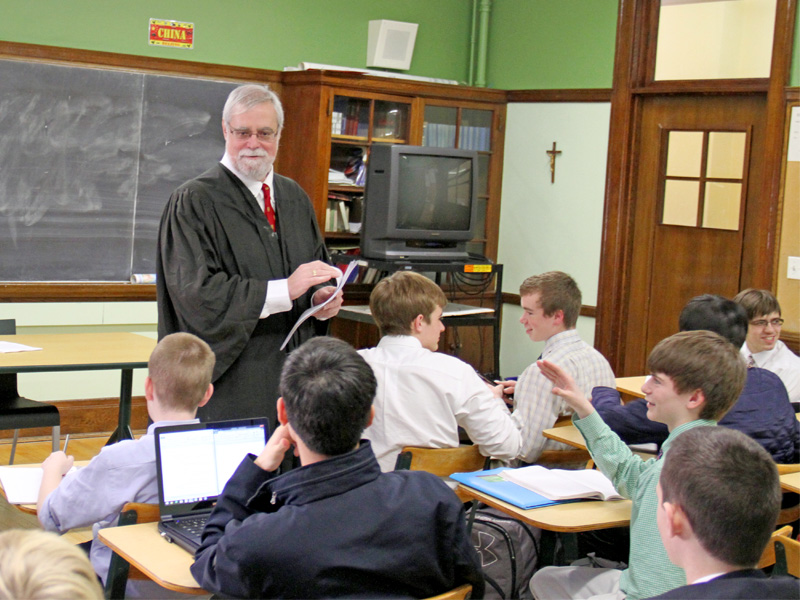 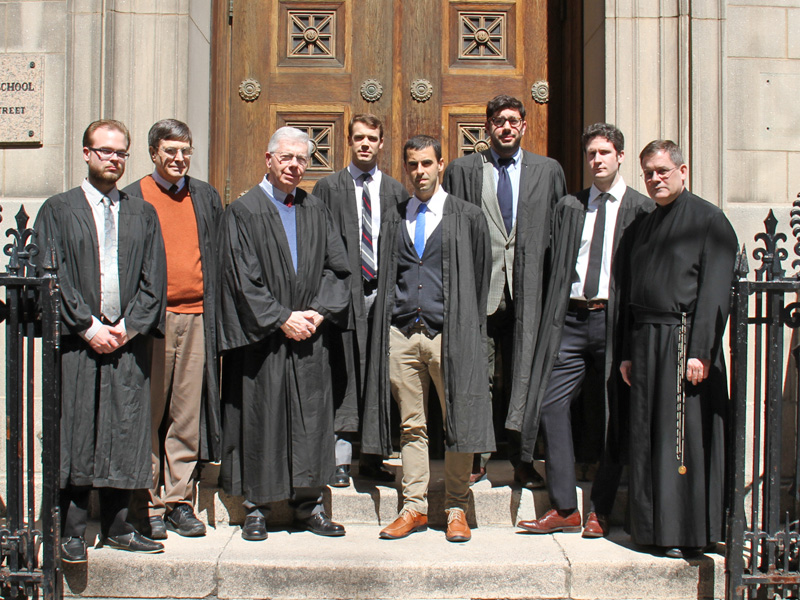 Unfortunately, some students did not have as easy a time adhering to the 1964 dress code rules, and they were disciplined accordingly, as evidenced in the video below.

There were other, more obscure rules that were hard to follow, too. Take, for example, the student in the video below who was caught violating the 1964 "Faculty Only" first floor hallway restriction.

Throughout the day, the Office of Development was busy keeping alumni, family, and friends of Regis informed of the day's activities through social media. The following collection of five pictures of students (taken a few days earlier) modernizing iconic Regis photographs were also posted. (Story continues below the collection of photos.) 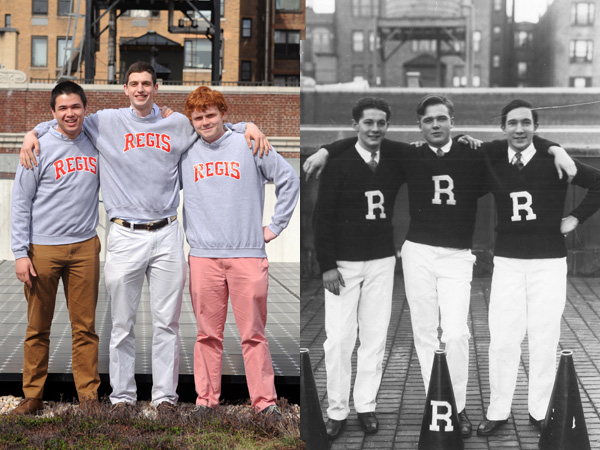 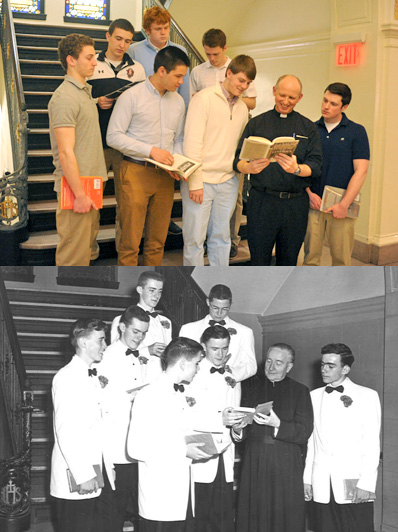 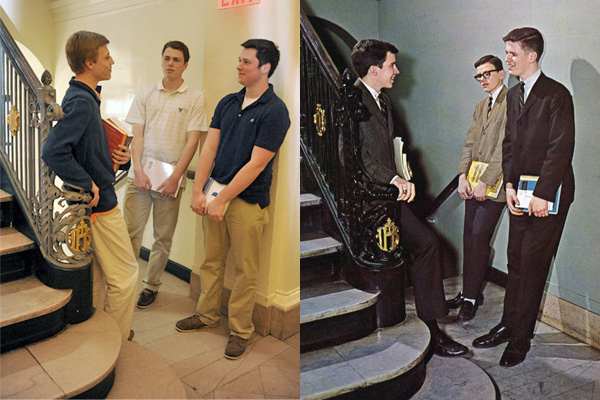 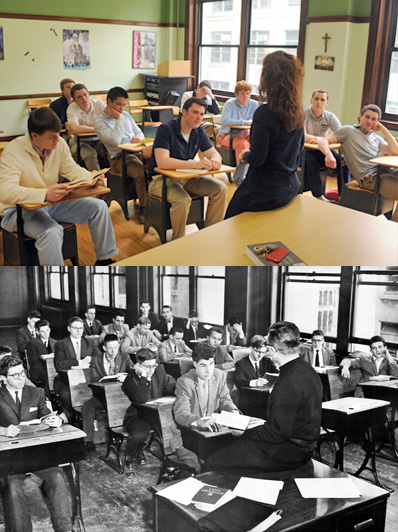 During a free period in the afternoon, a group of students attempted to play a few pick-up handball games. Since handball wall space no longer exists in the Regis Quadrangle, the students carved out some space in the Lower Gym for their games. 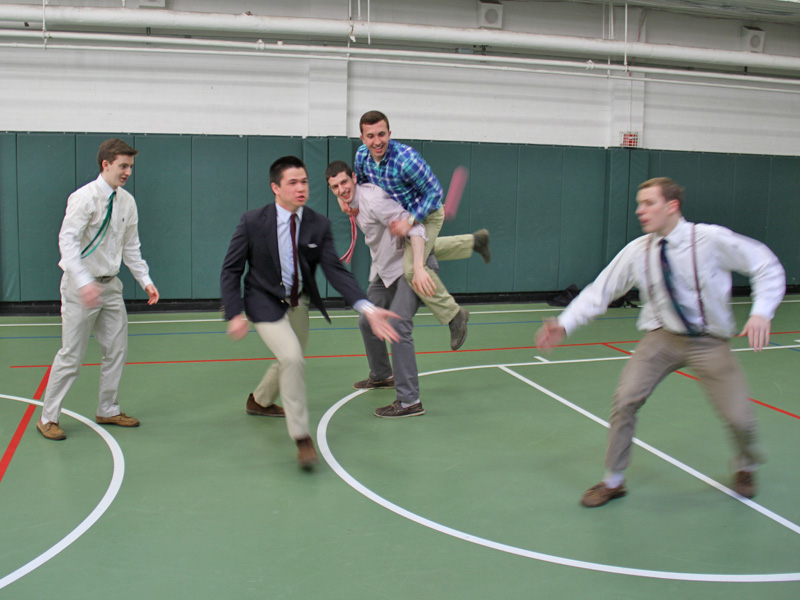 At 2:50 p.m., the school bell rang for afternoon advisement, and the throwback rules were retired. But for those students who were found violating those rules during the day, a special Centennial JUG awaited them.

Dean Serton recruited Dr. John Tricamo and Mr. Michael Vode, two former enforcers of the Regis code of conduct, to assist in the JUG session. Both former prefects of discipline provided a brief overview of what JUG punishments were like during their tenure as disciplinarian, and the students carried out some of those old traditions, including a tedious and repetitive walk up and down the hallway. 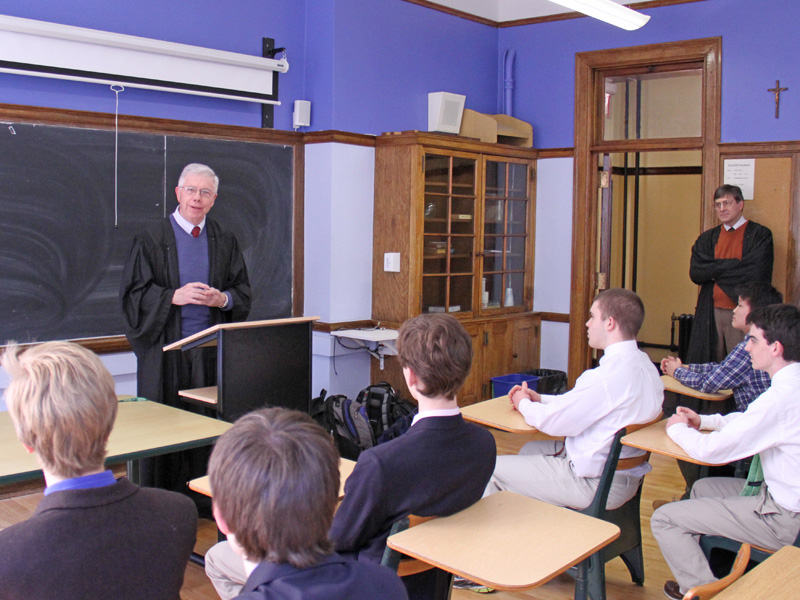 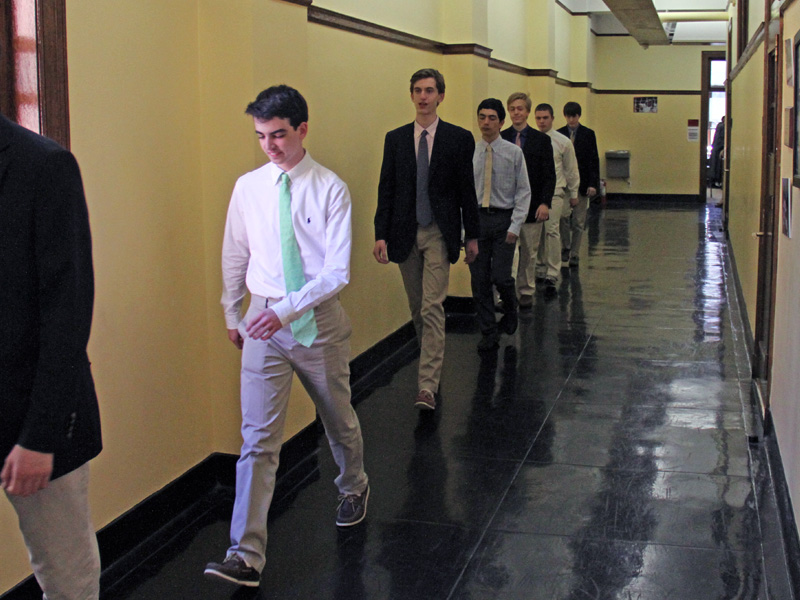 At 3:30 p.m., the Senior Room was opened to all students, and the main seating area was transformed into a Regis movie theater for a viewing of 1962's The Manchurian Candidate. The movie was the second to be screened as part of the Centennial Film Series. Dr. Gary Tocchet, Principal of Regis High School and teacher of a third trimester senior elective on the Cold War, introduced the movie and provided historical context to the movie's plot. 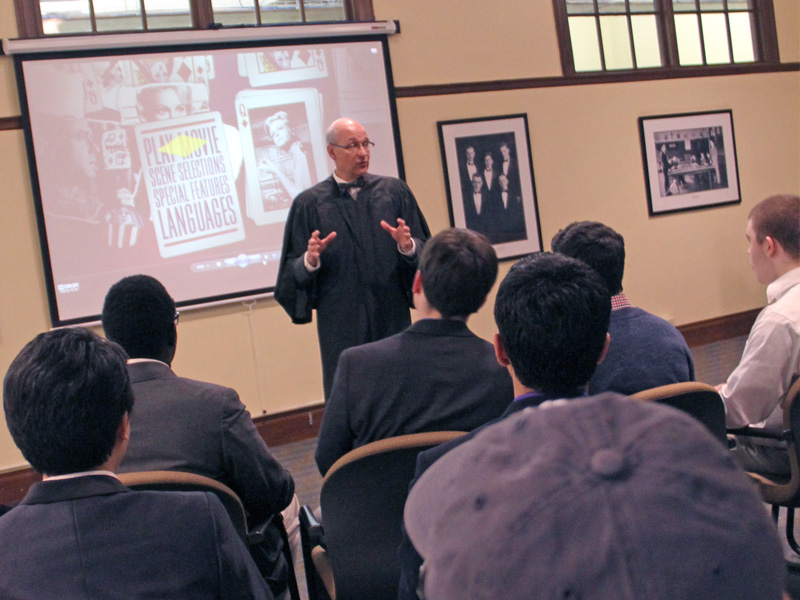 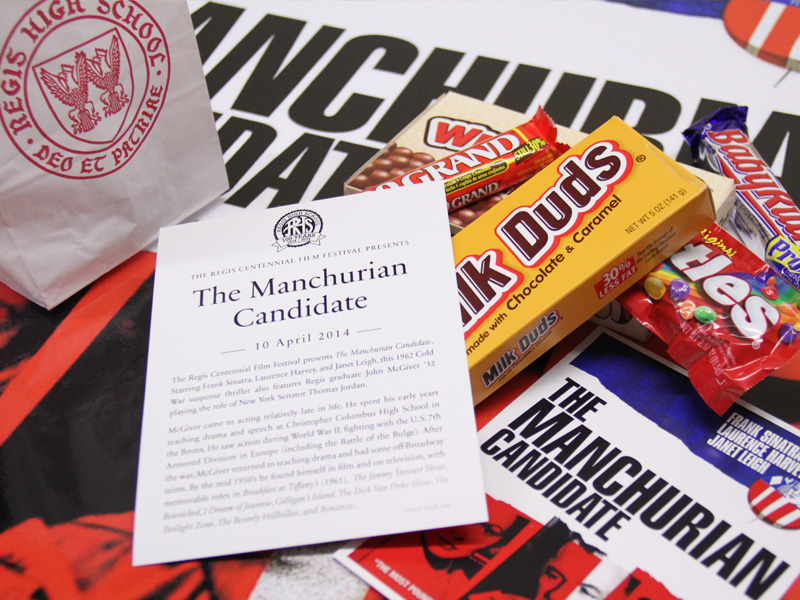 Social media posts to alumni, family, and friends of Regis continued throughout the evening as a countdown to midnight began. The final gift submitted through The 100th Day Giving page was recorded at 11:53 p.m., just seven minutes before the unique giving page closed for good. At midnight, the Regis website, Facebook, and Twitter images all returned to their modern-day 2014 theme.

On Friday, April 11th, The Regis Office of Development tallied the gifts and totaled the donations. When all was said and done, the office reported that 394 donors contributed a combined total of $59,738 to Regis in honor of the 100th day of the 100th year of Regis High School.

In a message posted through social media, the department, who themselves donned their best 1964 wardrobe throughout the fundraising effort, stated, "We are proud to serve such a supportive Regis family!" 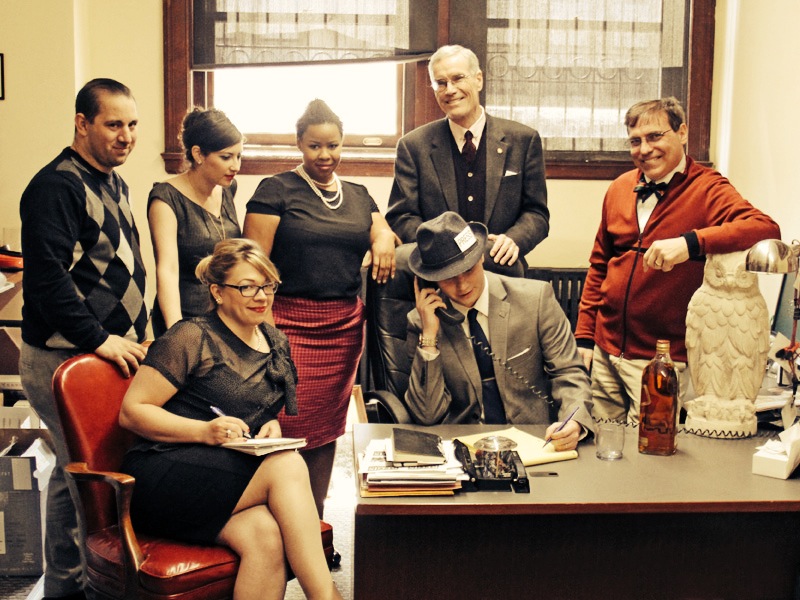