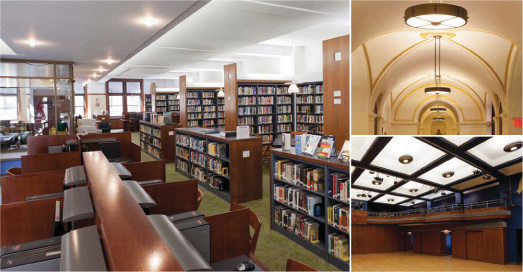 Over the course of any school year, students may notice the various maintenance updates that take place to keep the building in top shape. But a somewhat less noticeable transition to the school’s infrastructure recently concluded, one that has continued Regis’ sustainability efforts. In the early summer, Regis completed an entire retrofit of all light fixtures, replacing more than 2,500 fluorescent lights throughout the school with high-efficiency, long-lasting Seesmart LED tube lights. The benefits of this LED retrofit include energy savings estimated around $36,000 annually and approximately 116,000 kilowatt-hours per year, with a carbon footprint reduction by almost 120,000 pounds per year. Additionally, Regis received a $32,000 rebate from Con Edison.

“The Regis community prides itself on fostering a spirit of generosity and service, so decreasing our carbon footprint was an obvious decision for the betterment of our community,” said Rev. Philip G. Judge, S.J. ’80, President of Regis High School. “This project set a good example for our students and the community, and it solidified our commitment to a more sustainable future. Beyond that, the long term savings in energy costs made the decision a valuable investment.”

The retrofit began with replacing the light fixtures in the Upper Gym with LED fixtures. After successful results, the entirety of the school’s lighting was replaced with LED fixtures. Fluorescent lights were replaced with LED tube lighting in over 100 classrooms, offices, hallways, and other educational spaces. By the time the project concluded, over 967 new or retrofitted fixtures were installed.

Since 2006, Regis has been an educational leader in “going green”, which is most notably exhibited by the school’s 22,000 sq. ft. green roof and 22 kilowatt solar panel array. Committing to an entirely LED facility was the next-step in Regis’ efforts to further decrease its carbon footprint. As the Regis Centennial approaches, these greening efforts have helped foster a more sustainable operation which, in turn, helps ensure a healthy start as Regis prepares to embark upon a second century of tuition-free education.