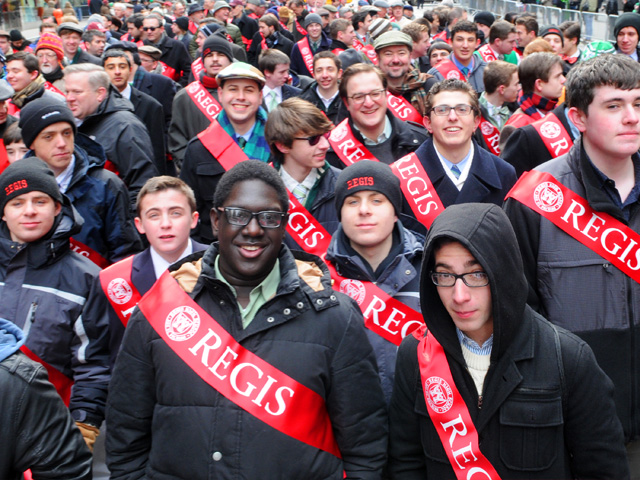 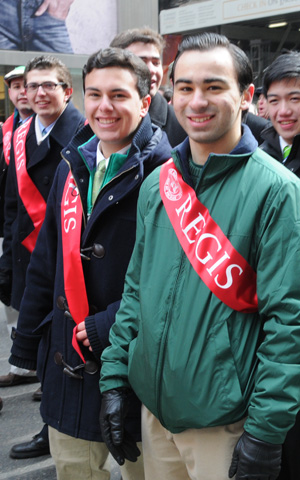 With the temperature hovering in the high-20's, over 200 representatives—a mix of current students, alumni, faculty, and staff—braved the cold weather to honor Regis and the school's unique connection to Catholic immigrants in New York City from 1914 to the present day.

"A hundred years ago, Regis educated the sons of Irish and German immigrants," said Rev. Philip G. Judge, S.J. '80, President of Regis High School. "It is an honor to parade up Fifth Avenue still celebrating our heritage of educating New York’s immigrant Catholics."

This is believed to be the first time Regis High School has marched in the Parade since 1949. Jack Dwyer ’48 was able to confirm that Regis marched in the late 1940's because he was one of the Regis students that marched 66 years ago.

“Students were required to march back then,” said Dwyer. “In fact, there would be Jesuit spies checking the line at 81st street from a balcony above, taking notes. If you were out of line or missing, your name would be on the bulletin board the next day and JUG would be your fate.”

Dwyer held the distinction on Monday as the only Regian in attendance to have previously marched as a representative of Regis High School in the New York City Saint Patrick's Day Parade. This was the first Centennial event he has attended, and Dwyer says he wouldn’t have missed this for anything. “I’m excited to return to Regis on Saturday, too, as I will be attending the Centennial year’s Classroom Revisited.”

Though there are some humorous theories as to why Regis stopped marching in the late 1940’s, alumni displayed proud enthusiasm to see the tradition rekindled in this Centennial year. But beyond the old tradition of marching, March 17 also holds a special connection to the history of the Regis High School building. According to a September 19, 1914 copy of The Catholic News, It was on Saint Patrick's Day 1914 that steel construction of the high school began. Six months later, the school would open “to begin the glorious work for which it was erected.” 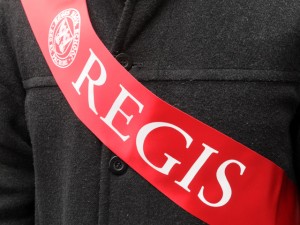 During the march, alumni and students donned commemorative Regis sashes, and many proudly wore a Regis Centennial lapel pin. Most enjoyably, they reveled in the cheers from the crowds along the sidewalks of Fifth Avenue.

“My being here today is a tribute to the Irish-American community which built this city and made this country great over the centuries,” said David Vascones '14. “I am here most of all because of the Catholic faith which brought me to Regis and which is so important to the Irish community, so I am just really thankful to march on behalf of Regis.”

After completing the march up Fifth Avenue, alumni and students proceeded to Regis for a special reception thanking them for marching and representing Regis. For Matt Murtagh ’04, who as a student would take the day off to watch the parade, this was a gratifying opportunity. “I had never marched before. I was very happy to have been given the chance to march with Regis, and the fact that this is the Centennial year certainly heightened the excitement.”

B.J. Waldie '99 also reflected on the significance of marching during the Centennial year. Waldie is no stranger to parades, having previously marched as a volunteer float handler in fourteen Macy's Thanksgiving Day parades. But the uniqueness of marching with Regis will always stand out as special. "It feels good to be called by Regis to march,” said Waldie. “It would have been hard to turn down the opportunity to participate in the Centennial year."

Reflecting on the event's inclusion in a year of celebratory activities, Fr. Judge quipped, "From the Stock Exchange to the St. Patrick’s Day Parade, all on our way to the Waldorf in the fall—Regis is having a ball celebrating its Centennial all around town!"

The Saint Patrick’s Day Parade march on Monday was the latest in a series of Centennial-themed events scheduled to celebrate the rich history of Regis High School, its founding family, and the family of parents, alumni, and friends that have supported the school through its first 100 years.

Celebrations will culminate with the Centennial Gala at the Waldorf-Astoria on October 25, followed the next day by a special Centennial Mass at Saint Ignatius Loyola Church. The mass will be celebrated by His Eminence Timothy Michael Cardinal Dolan, and Bishop Frank J. Caggiano '77 will serve as homilist. For more information on these and other Centennial events, please visit regis.org/2014. 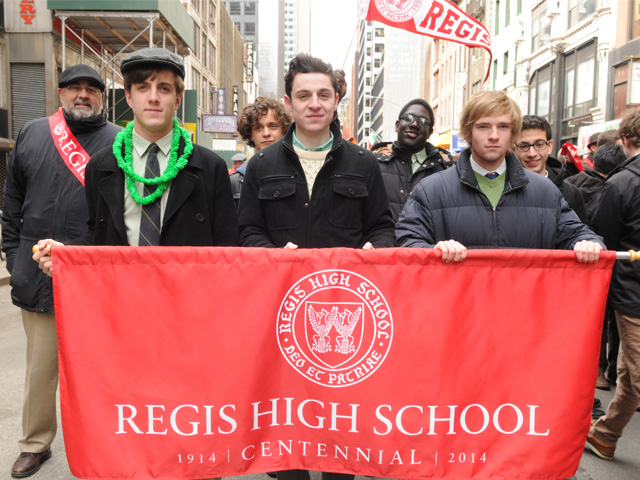 Above: Jack Donohue '14, Aran Fox '14, and John Spiezio '14 had the honor of carrying the Regis banner through the parade route. Photo courtesy Harisch Studios. 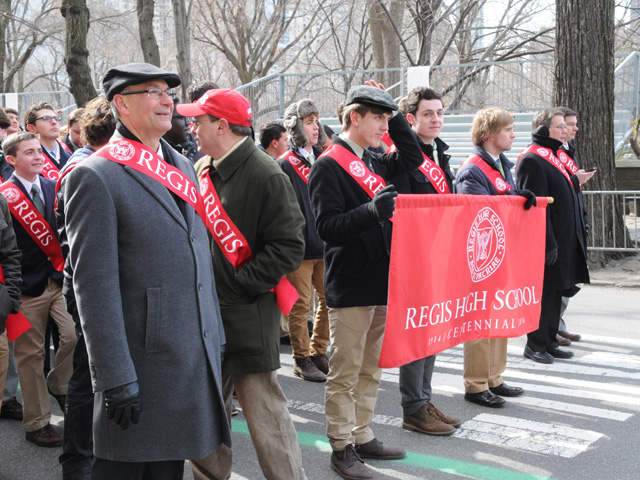 Above: The Regis contingent pauses momentarily during the march up Fifth Avenue. Photo courtesy Harisch Studios. 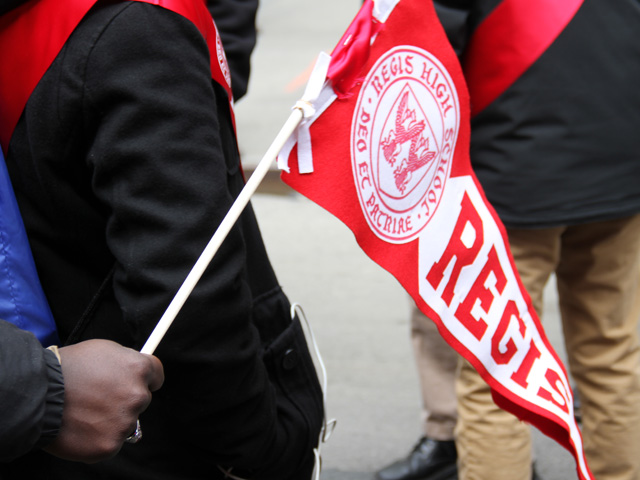 Above: A Regis student shows his school spirit as he carries a Regis Pennant during the march. 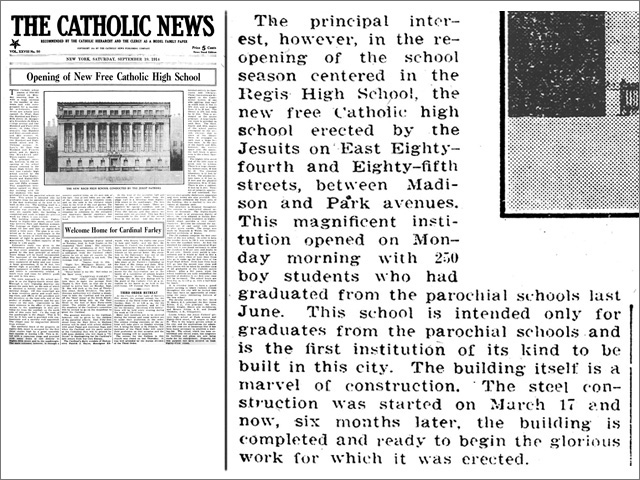 Above: A scan of the front page of the September 19, 1914 The Catholic News reveals that steel construction for Regis High School began on Saint Patrick's Day 100 years ago (March 17, 1914). 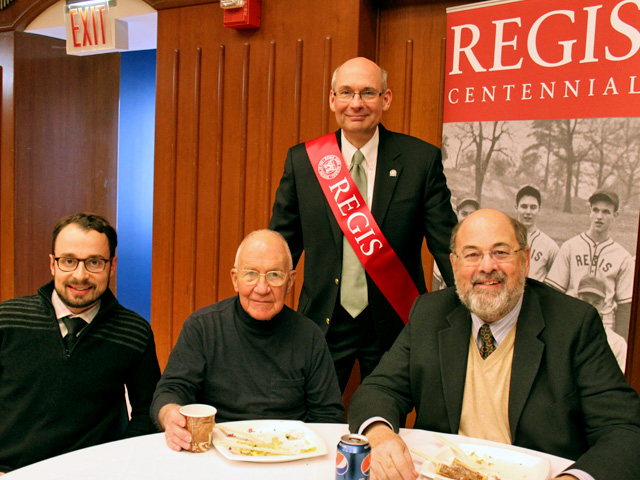 Above: Dr. Gary Tocchet, Principal of Regis High School (standing), poses for a photo with Matt Murtagh '04 (left), Vincent Rocque '63 (right), and Jack Dwyer '48 (center). Dwyer held the distinction of being the only participant who had previously represented Regis in the Parade (1948). 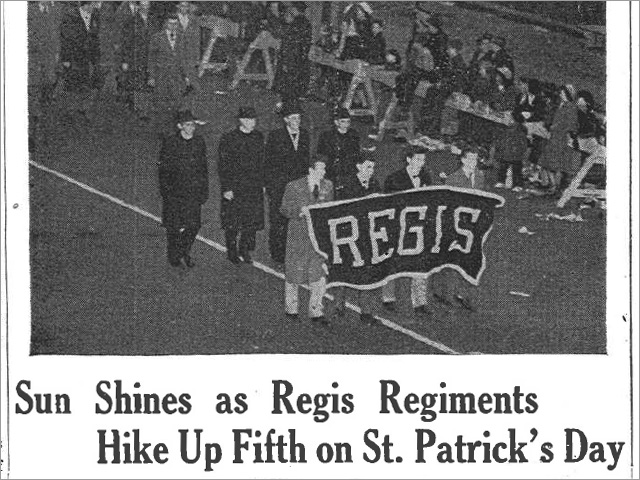 Above: A scan from a 1948 edition of The Owl newspaper recapping the Regis contingent's participation in the Parade. 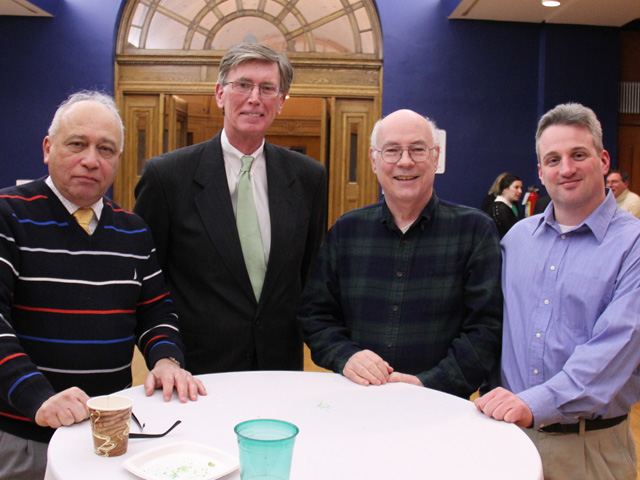